The Scoop: Since 1994, POZ has established multiple resources to benefit people in the HIV community. POZ Personals is among its most successful endeavors. This social networking and dating site has connected 150,000+ HIV-positive singles and loved ones, and it’s still growing. In 2018, the site launched a series of major updates that made it look sleeker and work faster on desktop and mobile devices. POZ Personals now boasts cutting-edge tools to keep fake profiles out and protect user privacy. Whether they’re looking to build friendships or find dates, singles in this online community can feel safe knowing they’re in good hands.

In 1994, POZ.com launched an online and offline effort to educate people about HIV and AIDS. POZ Magazine quickly garnered interest for its wealth of trustworthy information and inspirational survivor stories. Its resources gave people a chance to learn about and discuss HIV/AIDS prevention, treatment, and other health-related issues.

POZ made headlines by allying itself with the HIV/AIDs community and combating misinformation about the illness. In a time of mass hysteria, POZ stood out as a calming voice of reason.

POZ Personals connects and educates singles in the HIV community.

The POZ brand built a nationwide community to support people who are HIV-positive. Today, POZ Magazine has a circulation of 125,000+ doctors, AIDS service organizations, and HIV patients and families. Together, POZ Magazine and POZ.com reach over 70% of Americans who have been diagnosed as HIV-positive.

This network serves the interests of the HIV community, and that support extends from the healthcare industry to the dating industry.

POZ Personals is an important offshoot of the POZ brand. This niche dating site and social network offers the HIV community a safe forum for building friendships and relationships. The site also offers daily news, treatment updates, feature stories, and videos to continue POZ’s mission to inform people about HIV.

In 2018, POZ Personals received an upgrade that has made the site more user- and mobile-friendly. Thanks to the redesign, the site now boasts a sleeker look and an array of high-tech features that suit its niche audience. Ian Anderson, Smart + Strong President and COO, has overseen the upgrades to POZ Personals as well as its sister sites and brands, all of which serve people in the HIV community.

“Our mission is to provide the best resources to help everyone living with HIV to lead the fullest life possible,” he said. “Obviously, finding love is a top priority for many of them. We have been upgrading all our major systems over the past three years, and this year it was POZ Personals’ turn.”

Since POZ Personals launched, the website’s team has continually improved its tools to keep up with its fast-growing membership base. By listening to members’ concerns and feedback, the team has been able to offer improvements and solutions that work well for this niche audience.

For example, privacy is a major concern for people who have been diagnosed as HIV-positive. Singles are often hesitant to post pictures of themselves on an STD dating site because they fear the stigma it poses and the judgment it invites. That reluctance could keep them from exploring social connections on POZ Personals — but no longer.

POZ Personals has added a private photo feature that allows singles to maintain their privacy even in an online space. Now members are in control of who can see their photos. They can keep their albums private and only share certain revealing photos to the people they trust. 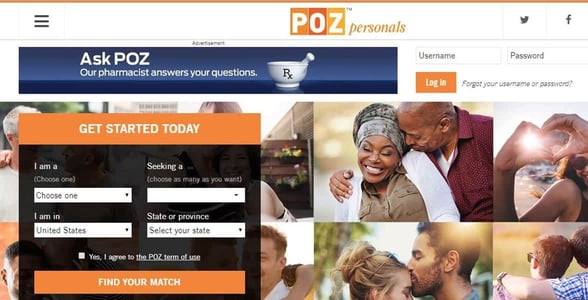 POZ Personals now allows members to mark photos as private and control who can see their pictures.

POZ Personals has also tweaked its photo editing tools to give users more options when uploading photos. Now singles can make sure every photo on their profile looks just right.

As a result of these improvements, more POZ Personals users have posted photos on the site and made their profiles more representative of who they are and what they want.

POZ Personals has also taken note of the growing trend toward mobile traffic and adapted to fit the demands of users on the go. Ian told us that mobile accessibility was a major priority when redesigning the dating site. “We wanted to make sure the site would work on all devices, including desktop, tablet and mobile,” he said. “We also purposely kept some of the components of the old site’s navigation to help ease transition.”

In the last year, POZ Personals has overhauled its look and become more in step with the times. What was once an old-school online forum is now a fully functional and mobile-friendly dating site. Its security processes and monitoring systems received an important upgrade, which was bad news for spammers and scammers lurking on POZ Personals.

The re-launched website is more proactive about identifying unsavory characters and automatically removing them from the community. Its moderation system is working 24/7 to protect users from harassment and abuse. As a result, 90% of surveyed users said they felt safe from scammers on POZ Personals.

POZ is an award-winning print and online brand that speaks directly to members of the HIV community.

POZ Personals has seen improvements across the board, and Ian told us user feedback on the changes has been overwhelmingly positive so far. While some people say they miss the old look and feel of the site, many more have voiced support for POZ Personals’ mission and praised the recent progress the site has made.

The POZ team’s efforts have made a difference in many people’s lives, and you can see that impact in the heartwarming testimonials posted on the site. POZ Personals members have written lovely thank-you notes to the team and described love stories that wouldn’t have happened without the site.

“I just wanted to let you know how much I love POZ Magazine and POZ Personals,” wrote Joshua, who works for the Minnesota AIDS Project. “It has definitely been a great resource for news and the personals have really helped me feel less alone.”

Claire Gasamagera, a 34-year-old Rwandan single with HIV, grew up thinking that she would die if she ever had sex with anyone. The POZ community educated her on the truth of her illness, and she eventually met Aaron, a truck driver who was also HIV positive, on the site. You can read their love story here.

POZ Personals: A Longstanding Resource Gets an Upgrade

Over 20 years ago, POZ embarked on a mission to destigmatize HIV/AIDs, and it has been working tirelessly toward that goal ever since. The POZ team has developed extensive informational resources and a lively community forum to support individuals facing serious health challenges. Its existence has helped many individuals endure difficult times and connect with people who will love and support them throughout it all.

POZ Personals has kept up with its fast-growing membership by developing cutting-edge tools to bolster engagement on the site. The dating site goes to great lengths to protect personal privacy and ensure users feel comfortable disclosing sensitive information about their health status. Its recent updates will bring users even greater peace of mind as they upload photos, send messages, and create meaningful connections online.

“Our focus is on serving the HIV community,” Ian told us. “POZ has been serving the community of people living with and those affected by HIV/AIDS since 1994.”