The Scoop: Encounters International (EI) is a marriage agency that has introduced hundreds of American men to Eastern European women. Since 1993, matchmaker Natasha Spivack has used her experience, intuition, and personal knowledge to arrange matches between her clients. Because Natasha personally knows every woman and every man in her agency, she is well-placed to play a traditional matchmaking role of introducing friends to friends. Encounters International sets itself apart by the personal service provided by Natasha to her clients. Every month, she invites them to experience the international dating scene at EI’s members-only social events in Washington, D.C. area. Natasha’s hand-holding approach to dating has successfully led hundreds of her clients to rewarding and lasting marriages.

Maria was 68 years old and single when she approached matchmaker Natasha Spivack about joining the Encounters International marriage service. “Am I too old for love?” the woman from Kiev asked.

Natasha couldn’t say no. “Everyone has a chance,” she said. “A lot depends on how you want to proceed and if heaven smiles on you.” 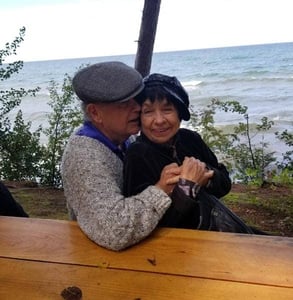 Curtis and Maria met through Encounters International about four years ago.

As luck would have it, a 70-year-old widower named Curtis joined the Encounters International network with similar concerns. He was afraid women would reject him because of his age. He said he wanted a Russian wife in her 50s, the same age as his deceased wife, but Natasha soon realized he was looking for love in the wrong place. He didn’t need someone younger — he needed someone who could appreciate his age and share his experiences and love him for who he is.

Natasha followed her hunch and set Curtis up with Maria at an EI-sponsored social event. It was Curtis’ seventh match, and this one did the trick. “It was so obvious that she liked him,” Natasha said. “She embraced him right away.”

The couple became engaged at the next EI monthly social event in December and got married in February 2012. “The most impressive thing about Natasha Spivack was her patience in guiding my attention as her new, stressed-out client,” Curtis said. “I would recommend her guidance to any man searching for a spouse from Russia or Ukraine, because the traps and pitfalls germane to this task are many, and Natasha knows them all. I am grateful for her work on my behalf.”

Since 1993, Natasha has seen hundreds of couples meet and fall in love, but she said Curtis and Maria stand out in her mind as an amazing testament to what matchmaking can do. Encounters International helps commitment-oriented singles overcome age, distance, and cultural differences when seeking the perfect partner.

As a professional matchmaker, Natasha has successfully arranged the meetings of hundreds of now-married couples. She introduces American men to Russian and Ukrainian women, and she paves the way for them to be together.

“Sometimes the stars align, and I don’t have to do anything more than talk them through the process and answer questions about how to get a visa and where to get a marriage license,” Natasha said.

Natasha said EI currently has over 150 male clients to its name, and she knows them all by name. Everyone who signs up for the service enjoys a lifetime membership, and Natasha personally interviews new members to get a sense of who they are and what they want. She ensures that her male clients have the right intentions and that her female clients are beautiful inside and out.

The EI matchmaker sets realistic expectations for her clients and makes sure they’re prepared to get married at the end of the matchmaking process. She only takes on clients who are willing to invest in their futures.

“For a man, it is an investment,” Natasha said. “If they trust me and stick with it, I will make sure they will not leave without getting married.”

Natasha shows her male clients picture after picture and waits for one to spark a match. She said she takes care not to judge men for what they want but to be there for them and offer guidance based on decades of experience.

The Encounters International handbook encourages singles to know what they want in life and pursue partners who want the same things. 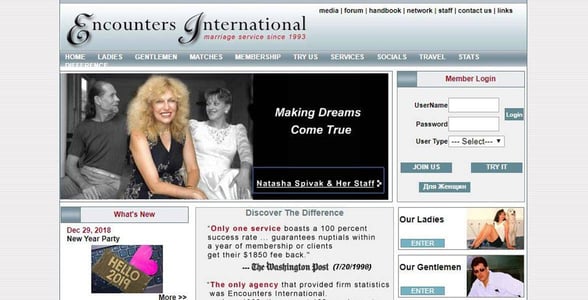 Sometimes EI clients don’t find love through Natasha’s matchmaking process, but they learn about themselves and gain clarity on what they want. One former client said it was “well worth the money” to realize that he was in love with someone outside the EI network and didn’t need to look elsewhere for a wife.

Natasha said she has seen men have emotional breakthroughs as they talk about how they feel and what they want in her office. Some of these men may not have another outlet to express and explore their feelings, so it helps them to have Natasha in their corner and asking the right questions.

“It’s amazing how much you can find out about a person if you’re genuinely interested in what they think and who they’re looking for,” she said. “I listen and absorb that information, and I give feedback in a diplomatic way.”

The success of Encounters International hinges on its social events. Former and current EI clients can attend the private social mixers in Washington D.C., Philadelphia, and New York. These Saturday Socials offer dozens of attendees a chance to network with many high-caliber singles and couples. 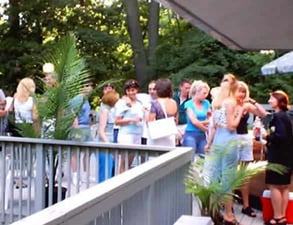 Saturday Socials include food, drinks, entertainment, and plenty of romance.

“We’re more like a private club than a marriage agency,” Natasha said. “As part of the club, people have the ability to communicate with beautiful women from Russia and the Ukraine at private socials.”

These low-key events take the pressure off singles seeking a spouse and allow them to get to know each other on their own terms. They can chitchat while enjoying cocktails on a yacht or a barbecue on a private beach. Sometimes the Russian women put on a show to highlight their musical gifts and other talents.

Natasha arranges introductions between clients at EI’s monthly socials, and she provides guidance as the relationship develops into something serious.

Over the years, many clients have met their future spouses at Encounter International’s Saturday Socials. Natasha said some have even fallen so completely for one another that they were soon shopping for engagement rings.

Responsible for Hundreds of Marriages & Babies

Encounters International has been around for decades, and it has inspired hundreds of love stories in that time. EI’s Family of Clients grows larger with every passing year. The network includes American men and Russian women from all walks of life. EI couples can be found across the U.S. and Canada. To date, the service’s matchmaking has led to over 500 marriages. 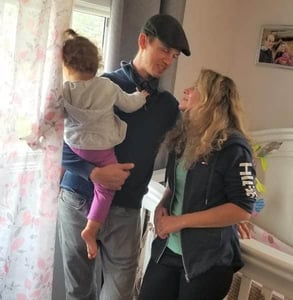 Andrei and Alina had an instant connection at an Encounters International social and are now married.

Curtis referred his neighbor Andrei to Encounters International in 2016 and described him as someone looking for a real partnership. “He wants a marriage that is like ours,” Curtis said. “He wants a similar relationship with a woman where he and she function together as a unit.”

Andrei flew to Washington, D.C. and met Alina from Moscow at the Saturday Social in April. After only a couple of days together, they felt like they’d known each other for a long time. Both were vegetarians, both had the same interests and values. It was an instant attraction. They married May 2, 2016.

Now three years later, Andrei and Alina have added a daughter to their loving family, and they have Encounters International to thank.

Scott H., a 49-year-old sales rep from North Carolina, attended his first EI event with a gloomy attitude. He said he didn’t think the woman he wanted to marry existed. Natasha begged to differ, however, and she began showing him videos of the Russian women in her network. A woman named Irena stood out on the list.

The next day, Scott and Irena met in Natasha’s office. They spent the next couple days falling in love, and, by the week’s end, Scott was eager to propose. They went to the courthouse and made it official. “Things are great between Irena and me,” Scott said. “I really didn’t think it would be possible for you to find someone for me — especially someone I could be so happy with.”

These love stories are the foundation of Encounters International. Many other clients have started their happily-ever-afters with Natasha’s blessing.

Encounters International is an Elite Club for Worldly Singles

Curtis and Maria’s unlikely love story still inspires the team at Encounters International. It shows just how unpredictable love can be, and it reminds the matchmakers that everyone has a chance at happiness. These professionals pass that lesson on to their clients, giving hope to singles who are widowed, divorced, and never married.

Couples are happy to share their personal experiences with other members of the club. “ I do hope that we are useful as an inspiration to others who come to you for help,” wrote Curtis. “A bad relationship can make daily life a nightmare, and a good one is a priceless gift!!”

Over the last 25 years, Encounters International has helped bridge the divide between Western men and Eastern European women and helped fruitful relationships to blossom at its members-only events. Natasha has established a trustworthy reputation for an international marriage service, but she still sees room for improvement and growth in the future.

She plans to focus on upgrading the matchmaking services to facilitate more personalized introductions and hands-on coaching.

“The more clients communicate one on one, with our help, the better the relationship,” Natasha said. “It takes both individuals to ignite the spark. When that happens, it usually happens one on one. However, you need to be in the right place at the right time for that to happen. We believe that Encounters International is such a right place and our socials are the right time.”

The Cave Store is a Unique Outdoor Date Spot
Stone Hill Inn: A Retreat to Rejuvenate Relationships
The Most Successful Dating Sites in Texas
See All Articles »
Advice Sections