BollyX: How Bollywood-Inspired Dance Fitness Can Excite Singles & Couples Who Want to Look & Feel Their Best

The Scoop: Stuck in a rut? Feeling low? BollyX can get you moving and grooving again with its energetic dance fitness classes. As seen on SharkTank, BollyX offers a Bollywood-inspired full-body workout that has taken the fitness world by storm. In-person BollyX classes are available in 110 cities, and people can also sign up for virtual workout classes thanks to BollyX On Demand. These engaging musical workouts can give couples the opportunity to bust a move, get healthy, and have fun together.

Dancing brings people together in a way that nothing else can. Once the music starts playing, people flock to the center of the dance floor and move to the same rhythm, share in the same excitement, and live in the moment with open arms and high spirits.

A startup called BollyX has captured that magic with its original dance workout, which takes its cues from India’s beloved Bollywood movies.

BollyX is the passion project of a group of fitness experts who love to dance and want to inspire people to have fun while maintaining good health. They offer in-person and at-home classes to make exercising feel more like a dance party.

The BollyX team maintains that you don’t need to live at the gym to look and feel your best, and they’ve crafted a 50-minute workout routine full of music and laughter.

“It’s more epic and dramatic than any other dance format out there,” said Fen Tung, BollyX Co-Founder and Fitness Director.

Over the years, BollyX has won the hearts of many people, including couples who enjoy going to the classes together and letting the music lift their spirits while the workout shapes their bodies.

Bringing the Joy of Indian Music to Every Workout Class

It’s hard not to smile when you hear an upbeat Bollywood song playing. Something about the music makes people want to swing their hips, wave their hands, and stomp their feet. Basically, it’s a natural accompaniment to a high-intensity workout.

BollyX has capitalized on the popularity and joy of Bollywood’s musical films and turned them into a one-of-a-kind workout routine.

In a BollyX class, the moves are simple enough for beginners to get the hang of and lose themselves in the beat. It’s not about executing a complex routine — it’s about enjoying music, feeling sexy, and riding that endorphin high. 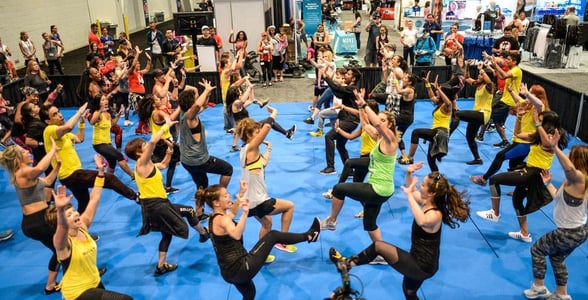 People of all ages and skill levels can take part, and BollyX instructors have seen everyone from college students to grandmothers participating. The majority of participants are between 25 and 45, but BollyX fans can come from all walks of life. Even Shark Tank’s sharks got into the routine.

BollyX began as an in-person workout class in 2013. However, it soon expanded to offer at-home video classes so that people from London to Singapore to Kuwait could join the dance party. BollyX On Demand has only been around a couple of years, but it has already become incredibly popular among people who want to work out on their schedule. 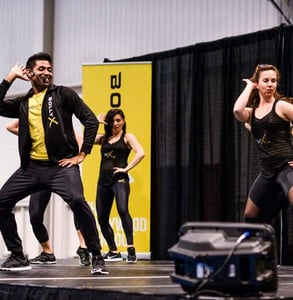 Starting a few years ago, BollyX began offering at-home sessions with over 400 routines and step-by-step tutorials available whenever and wherever you want. With a BollyX monthly subscription, you can stream the BollyX workout sessions (which last from 10 to 50 minutes) on your laptop, phone, TV, or mobile device.

Such flexibility is great for busy couples who have trouble making time for workout sessions together. Couples can spice up their evenings by playing a BollyX class at home and dancing in a much more intimate setting than a gym class.

BollyX dance fitness classes are about improving cardiovascular endurance by getting your heart rate up. The routines can tone muscles as well, but they mostly focus on getting people’s hearts pumping.

“Personally, I think fitness-based activities are the way to go for couples and dates,” Fen said. “About 99% of the songs from Bollywood are about love anyway! One shouldn’t take life seriously, so having the ability to laugh at yourself and get rid of all judgment in BollyX is priceless.”

In the fall of 2013, Shahil Patel and Fen Tung teamed up with a diverse co-founding team to create BollyX and share their passion for Bollywood dancing with people all over the world. Shahil had led a competitive dance team on America’s Got Talent, and Fen, MIT alum, had over a decade of experience leading exercise classes, so a Bollywood dance workout was right up their alley. These entrepreneurs saw an opportunity to change the fitness culture, and they jumped on it. Today, BollyX has certified over 4,000 instructors worldwide, and it maintains an active dance community in 110 major cities. 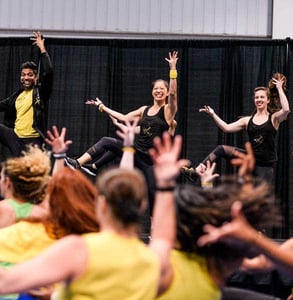 The story of BollyX began with college students who were enthusiastic about dance, fitness, and Bollywood.

These two entrepreneurs saw an opportunity to change the fitness culture, and they jumped on it. Today, BollyX has certified over 4,000 instructors worldwide, and it maintains an active dance community in 110 major cities.

“The BollyX HQ team is diverse and is what makes BollyX so amazing,” Fen said. “The culture and team motto is that we are always learning and growing by seeking and embracing feedback.”

BollyX continually asks for feedback from participants, instructors, and other professionals, and the team uses all constructive criticism to make themselves and their classes and products better.

Even though Fen and her team have years of experience behind them, she said they never stop learning and looking for ways to improve.

“The main message BollyX wants to get across to the world is that Bollywood dancing is for everyone,” Fen told us. “BollyX’s mission is to get everyone dancing as one big happy community.”

A Fun & Romantic Activity for Couples on a Date

A lot of daters have certain standards, dealbreakers, or expectations for their partners, and dancing can often come into play. As a BollyX Co-Founder, Fen is passionate about the workout routines she’s helped create, and early on in the relationship, she invited her boyfriend to join her class.

“The fact that he was a good sport about it meant a lot to me,” she said. “If you’re already in a steady relationship, then trying something new together, or finding a way to work out together regularly, is a great way to bond in a healthy manner. If you are just starting to date, it’s a great way to try something fun and unique together.” 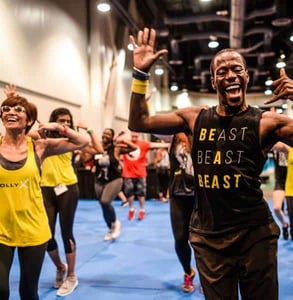 There’s a lot of personality, spunk, and joy in BollyX workouts.

BollyX classes have certainly attracted a lot of couples over the years. Some attend the workouts as a date-night tradition, while others do it as homework for an upcoming wedding or celebration. Fen said she’s helped several couples choreograph their first dance at their wedding.

When asked for her favorite story about a BollyX couple, Fen told us about Dakshita and Abhishek, who did a BollyX dance at their wedding after falling in love with the unique workouts.

Years ago, Dakshita happened upon a BollyX class in Boston and became a regular attendee. Then she had to move to a different city for a job, and she found out BollyX didn’t have classes in her new home (this was before BollyX On Demand). Dakshita didn’t let that get her down, though. She took it upon herself to become an instructor and run classes herself.

Soon, her husband became a certified instructor as well, and BollyX became a major part of their lives and their relationship.

“Dakshita’s story is one of my favorites because she went from living her life without BollyX, not ever having heard of it, to doing everything she could to keep it a part of her life,” Fen said.

BollyX Turns Up the Heat With High-Intensity Dance Fitness

BollyX has harnessed the power of dance and the vivaciousness of Bollywood to inspire greater health and fitness in people’s lives. The startup has built momentum and gained a following by creating unique, high-energy workouts that are more enjoyable and accessible than the typical calorie-burning sweat session.

Thousands of people have turned to BollyX to get their heart rates up and bring some romance and laughter to their days. It’s an effective and fun way to get healthy on your own or as part of a group class.

No matter what, every BollyX workout ends with a rock-star pose to leave participants feeling a sense of satisfaction and self-confidence. Couples can carry those good feelings with them afterward and bring that energy to their relationships.

“You don’t need to have dance experience, be in tip-top shape, be a specific age or gender or anything,” Fen assured us. “If you love the music from India and have an open mind to learning and experiencing new sounds and movements, then you’re in the right place!”