Dr. Margaret Rutherford Helps Singles and Couples Cope with Their Issues Through Her Podcast, Writing, and Clinical Practice

The Scoop: In more than 25 years as a therapist, Dr. Margaret Rutherford has helped numerous couples dealing with anxiety, depression, and everything in between. In the last few years, she has expanded her offerings to reach more people around the world through podcasting, blogging, and her book on perfectionistic depression. Today, Margaret connects with a much wider audience by having expanded her services beyond therapy sessions. Regardless of the medium, she still draws on her wealth of knowledge from her clinical practice to develop ideas to share with her readers and listeners.

Dr. Margaret Rutherford wasn’t on the path to becoming a psychologist early on in life. In her 20s, she was a jazz and jingle singer in Dallas, Texas, who regularly recorded and performed around town.

While searching for volunteer opportunities, she started working at a shelter for women who had faced domestic abuse. She ended up becoming so passionate about the work that she was named the head volunteer after three years.

“It opened me up to the idea of what I wanted to do with the rest of my life. I worked on my master’s degree in music therapy and then applied to several Ph.D. programs,” she told us.

In graduate school, Margaret said she developed a by-the-book philosophy because she thought that sticking closely to what she had learned was the only way to succeed in the profession. However, in 1993, when she officially became a psychologist and started working with clients, she developed a style that was much closer to her own natural style of being. She didn’t put on a therapist’s hat, so to speak. She simply wore her own.

Dr. Margaret Rutherford is passionate about helping individuals and couples overcome their issues.

“I integrated who I am as a therapist and a person,” Margaret said. “I am a direct person and use humor to make my point. I have a reputation as someone who cuts to the chase.”

Those qualities have also led to her success in her latest career moves: becoming a blogger, author, and podcaster. She said she used the tools she learned in her clinical practice and from client issues to lead her to the topics she discusses.

Margaret shares her ideas with individuals and couples in articles she regularly posts on her website and hosts The SelfWork Podcast. Further, she has written book called “Perfectly Hidden Depression: How to Break Free from the Perfectionism that Hides Your Depression” that can help people deal with a type of depression they may not have known existed.

A Compassionate and Straightforward Approach

In her roles as a clinician, writer, and podcaster, Margaret has always been herself. She never tries to be someone she’s not, and that approach has earned her a reputation for honesty.

“My perception is based on being a therapist for over 25 years,” she told us.

She said she also sees herself as a compassionate person who wants to help others solve their problems. Though she’s not always right, she’s still going to offer clients her perspective.

“I say, ‘What do we have control over in this situation?’ and I will also say, ‘Have you thought of this or that?’” Margaret told us.

But her point of view isn’t the only one she relies on. Instead, she said she sees herself as a conduit between what she’s learned from others and her clients, listeners, and readers.

“Sometimes, I have a client who comes in to see me with a problem I’ve never seen or never experienced. When the next person comes in with that problem, then I don’t necessarily use my wisdom but the wisdom I’ve learned from other people to help them,” Margaret said.

She has seen many different types of clients over the years and embraces the chance to learn from them. The oldest patient she has ever had was 93. Because she practices in a college town, she sees many clients who are in college, as well as those who are members of the LGBT community.

When Margaret began transitioning to podcasting and blogging platforms, she considered the issues that came up in her practice again and again. Then, she identified concerns that weren’t often discussed in the profession.

With that frame of mind, Margaret recalled two client stories. One woman had anxiety and worked herself ragged in her job. Another man’s wife confronted him with the fact that when his mother died, he didn’t cry. 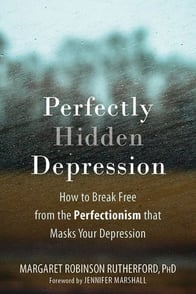 Margaret’s book helps readers see that their depression can be hidden under their perfectionism.

“None of them were comfortable with expressing painful emotion. They couldn’t do it. They smiled while they talked about traumatic events,” Margaret said.

Instead of expressing their emotions, those clients told her that because they had so much in life, they didn’t think they deserved to feel grief.

Ultimately, Margaret said she coined a term for the issue these clients were experiencing: She calls it perfectly hidden depression.

Another thing these clients had in common was that they were very successful in their lives. They used this perfectionism, and the busy lifestyles that accompany it, to mask emotional pain that they’d been suppressing for a long time.

“A lot of people have perfect-looking lives, but they don’t let anyone in. They’re very lonely and despairing on the inside. There is a link between perfectionism and suicide, and that is one of the reasons that the suicide rate is going up,” Margaret said.

Though she’d counseled clients with this kind of depression, she said she wanted to reach a much larger audience with her message. So, she wrote her book to give those suffering the tools to “find tangible tips for quieting that critical inner voice, and powerful strategies for coping with difficult feelings.”

Margaret has turned to new platforms to broaden the audience for her ideas. Though she’s worked with a lot of clients in her 25 years in practice, she said she wanted to connect with individuals and couples outside of her region.

Couples could also find advice for their lives on Margaret’s podcast, The SelfWork Podcast. She recently posted a show titled, “Sleep or Sex? How to Balance Both of Your Needs and Desires” and another called “How to Avoid Self Sabotage In Relationships.”

Margaret said she often comes up with such varied topics by focusing on helping people remove themselves from the emotional coping strategies they developed when they were children.

“Often, these coping methods cause problems for us when we’re adults. Looking like the star of their family or being told you were going to be a failure, all that stuff is fine when you’re a child but can cause problems in adulthood,” she told us.

She also has started connecting with many more people now that she’s blogging and podcasting. Readers and listeners will contact her online, and she may even use what she learns from them to offer new content, especially when she’s discussing relationships.

“I’ve covered lots of topics. Aggression is one of the major ways that someone can gain control in the relationship. Withdrawal is another. There are gender differences about what we need to hear and what our basic needs are,” Margaret said.

More than anything, Margaret said she is glad that she can still find new ways to help clients. As she discovered, singles and couples have varied issues that need unique solutions.

“People come to therapy for so many different reasons,” she said.