The Scoop: Matt Wilson founded the Backyard Axe Throwing League (BATL) in 2006, and today the fun-loving company hosts private parties and tournaments in 13 locations in the U.S and Canada. Over 1 million visitors have thrown over 8.2 million axes at these venues. Many brides and grooms over the years have chosen to take their wedding parties to BATL to give everyone a memorable experience in a competitive yet chill environment.

In the U.S., the pursuit of happiness has evolved into the pursuit of likes. Many Americans now view their lives through the lens of social media and work hard to craft that image to their liking. Some may decry technology as an isolating force in society, but social media can actually inspire people to go out and do some pretty cool things.

One study found that 72% of millennials would rather spend their money on experiences than stuff. They’d rather travel abroad, run a marathon, or visit a trampoline park than collect gadgets, clothes, and material goods. In some ways, the internet has shaped this generation into adventurers who foray offline in search of the perfect jealousy-inducing Instagram post.

As a result, the wedding industry has gotten a little more interesting as brides and grooms become more adventurous and ambitious. Modern couples know that to collect likes they have to go beyond the typical bar scene and find something eye-catching and extraordinary.

Something like the Backyard Axe Throwing League (aka BATL). Since 2006, this organization has offered an urban venue where people can relax and throw an axe. OK, technically it’s a hatchet, but they call it an axe to keep things simple for newcomers to the sport.

The Backyard Axe Throwing League creates a fun atmosphere for a party — especially a bridal party.

BATL currently hosts friendly tournaments in 13 locations, most of which have liquor licenses — because alcohol consumption and axe throwing go together like an axe and a target. Over 275 full-time and part-time employees are on hand to teach newcomers the rules and ensure they use the proper technique when chucking the lightweight hatchet through the air. It may look dangerous, but it’s actually a safe and easy pastime that’s perfect for large and slightly inebriated groups.

BATL often hosts private bachelor and bachelorette parties where friends can challenge each other to take their best shot and come away victorious. So far, BATL has racked up 25,000 likes on Facebook, so it has what it takes to make your event go viral.

“It’s an experience full of memories,” said Matt Wilson, BATL Founder and axe-throwing extraordinaire. “It’s about sharing something you enjoy with people you care about. That’s what’s so special about it.”

A Unique Hobby Kicked Off a National Community

Matt Wilson was bored on a camping trip when a friend suggested they throw a hatchet at a block of wood. It was a we-don’t-have-anything-better-to-do sort of thing, but it quickly escalated into a laughter-inducing pastime (alcohol may have been involved). Matt said they spent the next weekend throwing the hatchet and coming up with rules for the game.

When Matt returned home to Toronto, he wanted to share this new game with his friends. It took a little convincing, but he soon got them hooked on it.

“The first league was just seven friends doing our thing in my backyard,” Matt said. “We figured out the rules of the game, and it gave us a reason to get together, drink a beer, and catch up.”

In 2006, Matt decided to share his game with people in the U.S. and formed the world’s first organization dedicated to the noble sport of axe throwing. Today, he aims to convert every visitor into a passionate axe-throwing enthusiast.

Matt started this fun-loving community as an excuse to hang out with friends, and he said he’s been thrilled to see his favorite pastime grow into a national sensation.

In 2016, Matt launched the National Axe Throwing Championship (NATC) in Toronto to give people around the world a chance to join the fun. In January and February, the NATC invites its 5,000 league members to test their skills and try to win the Wilson Cup and $7,500 in prize money. When all is said and done, this international tournament gives out over $16,500 in prize money and charitable donations at the award ceremony.

Matt told us the 2019 tournament will stream live across North America, so you don’t have to travel to Canada to support your favorite competitors and watch the tournament unfold.

BATL sees people old and young, big and small, male and female, coming together on equal footing to try their skill at axe throwing. Many people enjoy the challenge of learning a new skill, but it’s not hard to get the hang of so anyone can get into it.

“It’s a satisfying feeling to watch the axe spin through the air toward the target,” Matt said. “It’s a visceral feeling. Once the axe hits the target, you’re hooked.”

According to the company’s internal stats, 23% of BATL’s private parties are bachelor or bachelorette parties. The average group size hovers around nine people, and the event typically lasts two hours. 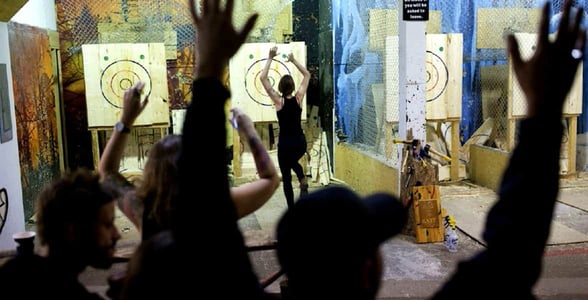 The exhilaration at a BATL tournament is infectious and leads to lasting memories among friends.

BATL can accommodate big crowds too, though. The largest BATL private event saw 157 people drinking, throwing, and cheering each other on. Ambitious couples could stage a wedding here, and the team wouldn’t bat an eye. In total, BATL’s 11 locations have hosted over 155,000 private events and walk-in visits.

A capable and friendly staff teaches you the rules of the game, hands you an axe, and lets you go at it during a tournament-style competition. The person with the highest score in a one-on-one matchup wins and goes on to compete against other top scorers until only one is victorious. In the case of a tie, the competitors go into a sudden-death match using a full-size battle axe.

You can let go of your stress as you let go of an axe at BATL.

BATL’s competitions are just as thrilling to watch as they are to compete in, so everyone goes away a winner (but only one person has the bragging rights of being the actual winner).

“People don’t know what they’re in for when they come for the first time,” Matt said with a smile. “I love walking through the venue and hearing screams erupt in the arena because someone just threw a great shot.”

Over 1.25 Million People Have Joined the Fun

BATL boasts having the largest axe-throwing community in the world. Over 1.25 million people have participated in the competitions in the last 230 seasons, throwing 8.2 million axes in total. 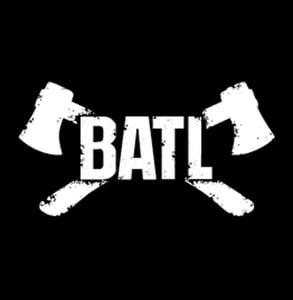 BATL currently has 13 locations in the U.S. and Canada, and it is growing rapidly.

This is the kind of laid-back game everyone can enjoy — it’s really not as difficult as it looks. BATL is open to people of all ages and abilities. You don’t have to be athletic to be good at axe throwing. And you don’t have to be good at axe throwing to win BATL’s competitions. “The way the scoring works, there’s always a chance for a come-from behind win with a Hail Mary throw,” Matt said. “We love to see that.”

The spirit of BATL keeps people coming back to celebrate birthdays, weddings, and other special events here.  This unique group activity encourages camaraderie and is ideal for parties.

BATL’s events give friends and family members a reason to cheer each other on and celebrate each other’s successes, even if it’s just scoring a point in an axe-throwing competition. Matt said the game can bring out people’s competitive drive, but it also helps them loosen up and have a fun time.

“Everyone can compete together, and it’s great for people of all ages, shapes, and sizes,” he said. “There’s always rock-and-roll music on, and the whole ambiance is very much about having fun.”

Whether you’re throwing an engagement party or a bachelor party, BATL has just about everything you could “axe” for. It offers great entertainment, food, and drinks, and the tournament is bound to lead to some memorable (and Instagrammable) moments.

Instead of going the safe route at a bar or club, you can make the gutsy decision to take your friends and family members to BATL for a thrilling afternoon. This fun battleground definitely makes an impression, and it’s an oddly addictive pastime. Just ask Matt and his core group of friends who’ve been happily hurling hatchets for over 10 years.

“We’re in the business of showing people a good time and building their confidence,” Matt said. “It’s been absolutely awesome to see the growth of this sport and build a community around something we love.”