Morak: The Dating Site for Discerning Singles Interested in Finding a Long-Term Relationship in the UK

The Scoop: Morak.com is a UK-based dating site with a growing audience of professional singles seeking friendship and love. The boutique company works hard to maintain tight security protocols, so members feel safe mingling and making genuine connections online. Singles can join Morak for free and scope out a date among thousands of relationship-minded men and women.

Online dating has been around since the ’90s, but it’s only recently become an accepted mainstream service. The Pew Research Center studied online dating trends and declared in 2015 that online dating had lost its stigma. 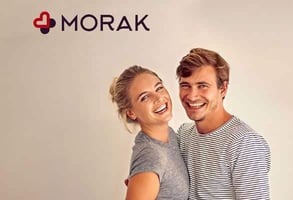 As views about online dating have evolved, general dating sites, like Morak, have seen an uptick in activity.

“Attitudes toward online dating have grown progressively more positive,” the study concluded. “In general, it is much more culturally acceptable than it was a decade ago.”

Naturally, as attitudes grow warmer toward online dating, that means more signups and more success stories for general dating sites. I’ve noticed this change in my own social circles over the past few years. Back in 2012, I didn’t know of anyone who had even tried online dating. Now, I’m pretty sure all my single friends have downloaded a dating app or registered on a dating site at some point.

Not only are more people giving online dating a try, but more people are talking about their experiences and coming out of the closet as online daters. Word-of-mouth is huge in the dating industry. Approximately, 29% of online daters said they joined due to a friend’s recommendation, and the best thing a dating site can do to generate signups is to get people talking.

That’s exactly what Morak has aimed to do with its customer-first and mobile-friendly dating services in the UK.

“Morak is one of the most exciting dating sites you can find online,” said Jake Idoko, a spokesperson for the dating site. “Morak is a dating site that’s best experienced rather than talked or written about.”

The Free Platform Has the Look & Feel of an App

Morak offers singles a pathway to a relationship in four simple steps. First you join, next you search, then you connect, and finally you go out in person. The dating platform’s quality-driven tools facilitate building relationships based on mutual interests and values. Morak is a mobile-friendly dating site, which means members can use it on the go and have the same experience they would on a full-fledged dating app.

Registering an account on Morak is free and takes only a few minutes. Members must identify as either a man seeking a woman or a woman seeking a man, and they must confirm they are over 18 to get started. Only people in the UK can join the network. Singles will go by their first names on the dating site; this means everyone starts off on a first-name basis and can get to know one another on a personal level right off the bat.

Morak’s step-by-step profile setup process encourages singles to slow down and think about every word they use and answer they give. This is important because every word sends a signal and could be the difference between someone sending a message or moving on to the next profile.

Morak supports a diverse membership base of relationship-oriented singles in the UK.

A Plenty of Fish study found that singles who use the words “love,” “heart,” “children,” and “relationship” in their profiles were significantly more likely to find a long-term partner on the dating site.

Once members have completed their profiles, they can browse the database by age, location, appearance, and other search criteria. People from all backgrounds use this dating site to find love. Its diversity is one of its primary selling points.

“Morak is one of the so-called general dating sites,” said Jake. “It’s general in that your age, sexual orientation, and other niche boxes do not apply to us. This makes Morak a vibrant site full of singles who are open to meeting single people who are not necessarily just like them.”

Online dating comes with its fair share of risk, but upstanding dating platforms can take steps to minimize those risks and protect honest members from certain unsavory characters online.

Morak has implemented strong security measures to ensure its members are who they say they are. Since its launch, this free dating site has proactively vetted new signups to ensure its free-to-join policy doesn’t attract scammers and fake profiles. The team removes the profiles of anyone who does not follow its terms and conditions. A team of moderators work around the clock to review every profile and photo uploaded to the site.

Morak strives to protect the personal safety and privacy of its members.

Members can report or block any profile exhibiting suspicious, threatening, or disrespectful behaviors. A team member personally reviews all reports and then takes action such as sending a warning or removing the profile from the site.

Additionally, Morak offers a personal data guarantee to its members. The site operates in accordance with the GDPR and protects the data privacy of all its members with top-notch data encryption and transparent data-collection policies. According to the website, “Keeping you all safe online is our goal.”

Morak is a Small Agency That’s Making a Big Impact

Opinions about online dating have changed dramatically just in the last few years. Back in the ’90s, it was seen as unsafe or uncool to use a dating site, and nowadays many singles view online dating as a normal part of the modern dating experience. The trends indicate that online dating will continue skyrocketing in popularity as more people give it a try and share their experiences finding friendship and love online.

Today’s dating sites enjoy a unique ability to reach people and change lives in meaningful ways, and many forward-thinking platforms are capitalizing on technological advances to facilitate deep connections.

Morak is a small UK-based dating agency with big plans for the future. This close-knit team endeavors to improve the dating scene for relationship-minded professionals throughout the UK. So far, its high-tech tools have yielded great results. By empowering high-caliber singles to seek high-caliber dates, this free and convenient platform has opened a world of opportunities to people who have everything going for them — except a thriving love life.