The Scoop: The Campaign for Southern Equality has spent years advocating on behalf of the LGBTQ+ community in the American South, and it’s only just getting started. What began as a struggle for marriage equality in the South has evolved into a multifaceted campaign for acceptance, health, and, most importantly, love. Today, the Campaign for Southern Equality focuses on giving its support to LGBTQ+ folks and leading an inclusive grassroots movement that embraces all Southerners.

In January 2011, the Campaign for Southern Equality (CSE) launched the WE DO Campaign to invite LGBTQ+ couples across the South to share their love stories and put a face on the issue of marriage equality in the South. 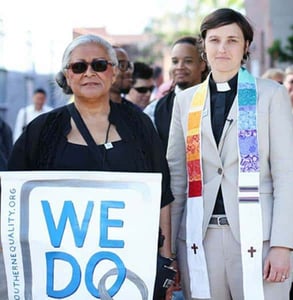 The WE DO Campaign highlighted the rainbow of loving relationships flourishing in the South.

Over 200 couples in seven Southern states participated in this campaign from 2011 to 2015. The couples, surrounded by supportive family members, friends, and neighbors, formally requested marriage licenses from county clerks’ offices and provoked the denial of the license. The campaign collected and shared these stories online.

By doing this, the WE DO Campaign illustrated what marriage discrimination looked and felt like, transforming it from a conceptual denial of freedom into something hurtful and emotional.

Ivy Hill was one of the many voices calling for marriage equality in the South. Ivy had applied for a marriage license in South Carolina multiple times and had been denied by the state.

Ivy, who takes the gender neutral pronouns they/them, began volunteering with the Campaign for Southern Equality to change hearts, minds, and, eventually, the law. The organization’s advocacy work broke down barriers between people and, ultimately, saw a great victory when marriage equality became the law of the land in 2015.

Today, Ivy works as the Community Health Programs Director for the CSE. Their day-to-day responsibilities include running pop-up clinics, updating the LGBTQ+ South resource guides, and reaching out to community leaders to organize helpful programs geared toward LGBTQ+ youth, adults, and families.

“What really made me fall in love with CSE was this idea of empathetic resistance,” Ivy said. “That means treating even the people who oppose our equality with love and dignity. We believe every human deserves dignity. That’s an ethic we really value, and it holds true in our work.”

While working toward marriage equality, the Campaign for Southern Equality created a community-driven support system for LGBTQ+ individuals and developed services that addressed important issues in health care, the workplace, and everyday life. 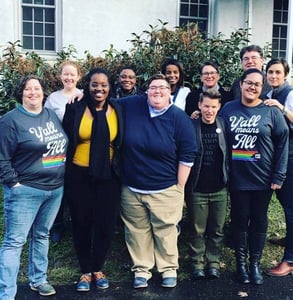 The CSE team rallies behind LGBTQ+ Southerners with helpful resources.

Over the past few years, the campaign has expanded to meet the needs of LGBTQ+ singles, couples, and families in the South. A myriad of challenges — from hiring discrimination to transition-related health care — can impact these groups, and the Campaign for Southern Equality has committed to providing educational resources and supportive services to help.

Trans in the South: A Guide to Resources and Services maintains a list of over 400 trans-friendly and trans-competent mental health providers, primary care physicians, HIV care specialists, attorneys, endocrinologists, and other health services spread across 13 Southern states. This list (and interactive map) is frequently updated and available in both English and Spanish.

Thanks to the CSE’s free resource guides, trans folks can get in touch with medical professionals who understand their needs and can support their transition. They can also find legal resources and learn how they can take action in their neighborhoods. 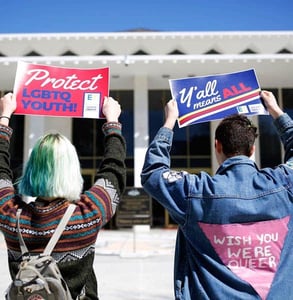 Whether it’s organizing protests or running clinics, the CSE looks out for LGBTQ+ interests.

The CSE uses its considerable resources to support regional programs that look out for the health and well-being of LGBTQ+ Southerners. The Southern Equality Fund has given grants to many local leaders, community organizers, and nonprofits and powered a grassroots movement across the South.

The Southern Equality Fund has helped movers and shakers tackle a variety of issues that intersect with LGBTQ identity. In 2019, the fund gave $30,000 in grants to programs related to health care, including pop-up clinics that offer free HIV testing.

“It’s really driven by the local community and the needs identified by the leaders of the community,” Ivy said. “We try to work together to build out clinics where we can deliver resources to people in the community.”

From self-defense classes to free therapy sessions, the CSE has powered many useful and life-changing programs over the years, and the team hopes to continue offering a helping hand wherever it’s needed so that LGBTQ+ folks don’t have to face their troubles alone.

The CSE takes part in impactful projects that can change people’s perspectives and transform their lives. 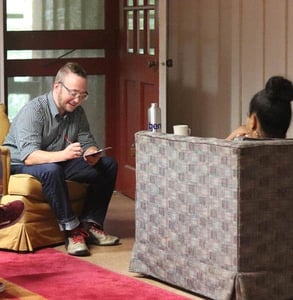 “Surveys have found that the trans community doesn’t seek medical care when they need to,” Ivy said. “So it was really special to hear trans folks talking about having a great experience with a health care provider.”

Ivy said some people would hug hir and cry with relief and gratitude because they hadn’t expected to enjoy such supportive and quality health care during their transitions. 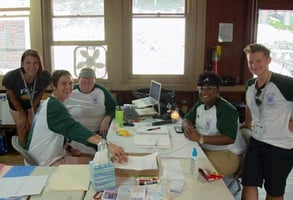 Camp GB gives trans youth a safe space where they can be themselves and make friends in the LGBTQ+ community.

Trans folks can encounter many financial, logistical, and institutional barriers when seeking medical treatment, and that can hamper their health, self-esteem, and happiness.

Camp GB’s team has endeavored to remove all those barriers and foster a friendly and productive dialogue between medical professionals and trans youth. Its hands-on health care program has done a world of good for individuals who may not feel so supported at home.

Ivy explained that many of the summer campers don’t have easy access to trans-friendly health care providers in their hometowns, so it means a lot to them to be able to talk to someone who understands their situation.

“It was a transformative experience,” Ivy said. “It was amazing to be able to be part of that.”

The CSE: An Ongoing Effort to Spread Love & Compassion

Every year, the Campaign for Southern Equality assesses its progress on the road to equality and sets priorities to further its mission in the South. By focusing on health care, racial equity, immigration, and other hot-button issues, the team leads a grassroots movement that positively impacts many LGBTQ+ Southerners.

Marriage equality was a huge win for the organization, but it wasn’t the end of the story. The CSE has continued to strive for equality in all areas of life, redirecting its resources to local causes that empower people to live openly and love proudly. Today, the organization runs clinics, funds programs, and raises awareness about many social and health issues facing the LGBTQ+ community.

“We’re constantly looking to our community members and listening to them about what their needs are, and trying to create pipelines to fill those gaps,” Ivy said. “Because of that, we’re able to have a huge impact.”