The Scoop: Lovebox can send a sweet message on Valentine’s Day and continue showering couples with love day after day and year after year. The high-tech box is a private messaging system for loved ones who may not live nearby, but want to stay close to one another. Lovebox delivers texts and images sent directly from app user to box owner, and its spinning heart feature can make chatting extra fun. Long-distance couples can use Lovebox to show affection, make silly jokes, ask for a date, and communicate from the heart.

Lovebox is the labor of love of a creative and international team. The idea started with a French man brainstorming a gift idea for his fiancée while he prepared to study abroad. Jean Gregoire made the first Lovebox in a makerspace in 2015, and it was a big hit.

The simple wood box has a heart on the outside that spins when a text message is received. The recipient removes the box top to read the text message on the screen inside. Jean recognized that such a unique messaging device could help other dating and married couples send love to each other, and he began working to make Lovebox available to consumers. 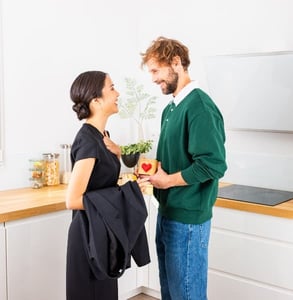 The first Lovebox users had to apply to receive a prototype. Their feedback helped the startup company grow in a positive direction and give customers what they wanted.

By 2016, the Lovebox team had perfected its design and produced 500 Loveboxes in time for the holiday season.

As of today, Lovebox has delivered over 200,000 Loveboxes to couples, families, and other loved ones. Its customers are mostly in the U.S. and Europe, but people can take Lovebox anywhere in the world and still be able to communicate through its smart technology. All they need is the Lovebox app and a WiFi connection. The Lovebox network has reached many foreign shores and bustling big cities in its effort to spread love and happiness.

“Lovebox as a startup was born with a unique mission: leverage technology to help people feel and express love,” the team said.

With Valentine’s Day coming up, we wanted to highlight Lovebox as a wonderful gift idea for long-distance couples who want to strengthen their relationship and show they care.

The Easy-to-Use Device Connects Couples Around the World

From the outside, a Lovebox appears to be a simple wooden box with a heart on the side. But when you open the lid, you’ll see a screen that can share text messages and pictures from anyone who has the Lovebox app and the code to your box.

The Lovebox heart spins whenever it has a new message waiting to be discovered, and users can spin the heart in the other direction to send a shower of hearts to the sender’s phone via the Lovebox app. 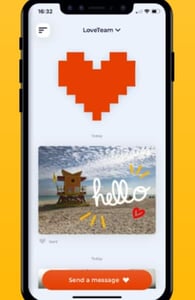 The Lovebox app is free to download and uses a secure code to connect to an individual box.

This messaging device has an old-school feel to it — as if you were passing notes in secret or delivering momentos to a hidden mailbox.

Couples can develop their own private codes and create new traditions by using Lovebox to communicate across city lines and international borders. Lovebox does not have international fees or long-distance limits. The app uses a WiFi connection to deliver messages instantly, and it works like a charm.

Lovebox gives people the chance to show what’s in their hearts and let their true colors shine. It is by no means a one-size-fits-all type of gift. Customers can add a personalized touch to their Lovebox by getting a specially designed heart. The online shop has several decorative options, including a colorful pixel heart and an American flag heart.

Unveiled in 2020, the Hello Kitty Lovebox has won over many people with its adorable character-inspired design. This product will be available for a limited period of time, so be sure to jump on it if your sweetheart is a Hello Kitty fan. “My wife loves her kitty. Hello Kitty, that is,” said Brian D. in a product review. “An excellent upgrade.”

The Lovebox team is constantly coming up with new colors, features, and designs to make people smile, and its beautiful tech-inspired products have helped kindness and love circle the globe.

Additionally, the app now has the functionality to send personalized messages via Whatsapp or a real postcard printed and mailed by the Lovebox team.

“It means that the Lovebox mobile app now allows you to brighten your loved ones’ days whether they have a Lovebox device or not,” a spokesperson for Lovebox said. “We are proud to become the first omnichannel messaging solution to deliver special expressions of affection.”

During the coronavirus pandemic, many long-distance couples have faced challenges in their relationships. Some of them have been emotional, and others have been logistical. Travel isn’t as easy or as safe with a deadly virus on the loose, so couples have had to cancel trips, skip date activities, and even delay weddings in the last year.

Lovebox can offer long-distance couples a powerful way to move forward and find joy in the new normal. The technology keeps two people connected no matter where they are in the world, and it can bridge any divide with a simple text or photo message.

“We do not make any New Year’s resolution,” the team said on Facebook. “But we give ourselves the right to love and be loved — this is a big commitment enough.” 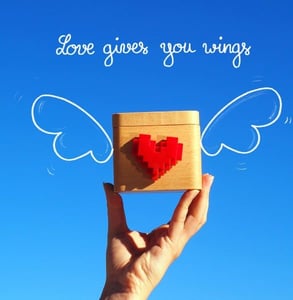 As a whole, Loveboxes deliver more than 500,000 messages each month.

It’s no wonder that Lovebox has inspired so many heartfelt testimonials over the years. It’s the kind of gift that keeps on giving. Every time the heart spins and a message appears, it’s a reminder of a relationship that means a lot.

Anna said she gave her boyfriend Charlie a Lovebox to bring more fun to their long-distance relationship. She sends texts to the box, and he responds by spinning the heart to send a shower of hearts to her phone’s screen. Such interactions transcend physical distance and make them both smile.

“It’s almost like a two-in-one gift, since we both benefit,” Anna said. “I also love that the app kind of encourages you to send messages to each other by having a little heart-o-meter. As you send more messages, the meter fills up, and you can unlock more icons and capabilities within the app.”

Another dating couple named Sean and Lynn said they communicate through Lovebox on a daily basis. “This product was everything I imagined it to be and more,” Sean said. “I love that I’m able to send private messages to my girlfriend. She loves it just as much as me, if not more!”

Couples aren’t the only ones who can use Lovebox to give and receive love. The team has heard stories of many families and friends who have made Lovebox part of their traditions.

“Lovebox gives me an opportunity to send special messages while I’m away,” said Robert, a father who travels often for work and uses Lovebox to stay connected to his family at home. “I know that seeing the heart spinning makes us a bit closer with each message I send.”

Lovebox is a Valentine’s Day gift that means more than a trinket and lasts longer than chocolate. It’s a promise of continued devotion and laughter, no matter the distance between you. Lovebox can send a touching message and keep daters in touch even as they travel the world. What could be better than that?

Over the years, Lovebox has inspired countless sentimental moments — and many TikTok videos — by ensuring loved ones can always keep in touch.

Whether you’re dating or married, Lovebox can be a lovely gift for that special person in your life. It can open a new line of communication, bring lots of smiles, and show that you care on Valentine’s Day and beyond.

“We are championing for love, helping everyone devote a few minutes, even on a busy day, to send a token of affection,” the Lovebox team said. “Because we believe every single mark of affection makes the world a better place.”