Travel Guru Mikah Meyer Has Visited All 419 U.S. National Parks & Provides a Road Map for Couples to Share an Adventure

The Scoop: After losing his father to cancer in 2005, Mikah Meyer became determined to treat every day as a gift and live his life to the fullest. In 2016, Mikah took this philosophy on the road and became the first man to visit all 419 U.S. national parks in one road trip. Mikah has been to some of the most beautiful and remote places in the country, and now he shares his travel expertise with singles, couples, and families who want to follow his lead and take a whirlwind trip.

Mikah Meyer embarked on his first solo road trip in 2005 a few days after his father’s funeral. Mikah was 19 and had originally planned on taking the trip to celebrate the end of his freshman year of college. Instead, the trip gave him time to heal and reflect on what he valued most in life.

Every year since then, Mikah has packed his bags and road-tripped across North America to see as much as he can while he still can. He doesn’t take any day for granted, and his days have been much richer as a result. 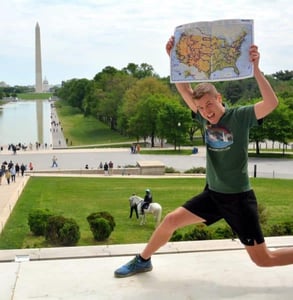 Mikah Meyer completed his goal to see all 419 U.S National Parks in one trip in April 2019.

Mikah told us that losing his father to cancer has given him a new perspective and motivated him to seize opportunities while he can. “It was a life-changing experience because it showed me that none of us knows which day will be our last,” Mikah said. “When I turned 30, I wanted to do something that would positively inspire people to learn that lesson, so they didn’t have to learn it the hard way like I did.”

In 2016, Mikah set out on a whirlwind cross-country trip to see all 419 U.S. National Parks. His three-year itinerary took him to all 50 states as well as five U.S. territories and one district.

When he concluded his trip on April 29, 2019 on the steps of the Lincoln Memorial, Mikah became the first person to visit every U.S. National Park in a single road trip.

Mikah’s remarkable story has been featured on popular media outlets, including NPR, USA Today, and The Washington Post, and he has made over 150 motivational speeches at schools, events, and conferences to inspire others.

With all his road-tripping experience, Mikah has also become a sought-after travel blogger with articles appearing in The Huffington Post, RoadTrippers, The Wilderness Society, and other online publications. Couples can learn from his experiences and plan romantic road trips that explore the natural beauty of the American landscape. After all, there’s no time like the present.

How One Man Embarked on a Cross-Country Road Trip

Mikah told us that it took him two years to create a budget and map out his 200,000-mile journey crisscrossing the United States to see every U.S. National Park. He had to time his trip carefully because not all parks are open all year round, and some are best visited during specific seasons.

In preparation for his epic road trip, Mikah tricked out his van, which he calls Vanny McVanFace, with a queen bed, refrigerator, and solar panels, so he could ride in style and save money on hotel accommodations.

Mikah had a basic outline of where he wanted to go, but he left a lot of leeway for improvisation, detours, and alternate routes.

“That’s something I’ve learned — you have to build in time for the unexpected,” he told us. “So often we plan every minute of a vacation, and that leaves you no time to deviate from the plan and meet an interesting stranger or get lost in an adventure.” 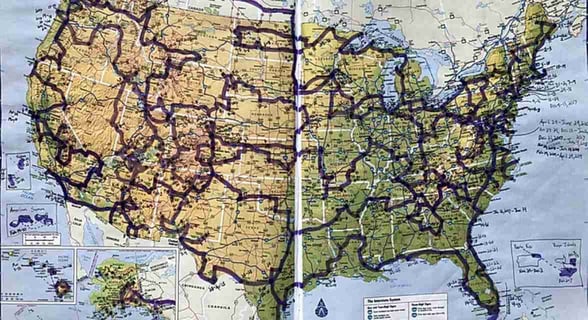 Mikah has traveled to every corner of the U.S. to visit its most beloved sites.

With the spirit of adventure as his guide, Mikah made sure to always keep his eyes open for unexpected pleasures and memorable moments. He went hiking through the wilderness, rafting down rivers, and snorkeling in the ocean, and he witnessed many breathtaking sights while chasing the horizon.

For instance, Dinosaur National Monument doesn’t often appear on many must-visit lists, but it gives visitors the rare opportunity to view dinosaur fossils embedded in cliffs and canyons. This 21,000-acre park on the border between Colorado and Utah made a big impression on Mikah.

“That’s a great example of finding adventure in your own backyard and discovering the unknown,” Mikah said.

Sightseeing With Loved Ones is an Enriching Experience

Mikah has gotten many messages since he embarked on his three-year journey to see every National Park. He currently has over 68,000 followers on Instagram and more than 7,000 followers on Facebook. And many of them want to know just one thing: How can I make a trip like this?

Singles can see a cross-country road trip as a chance to test their boundaries and take fantastic photos for their dating profiles, while couples can use a long vacation as an opportunity to leave everyday cares behind and grow closer with each other through a shared experience.

Throughout his journey, Mikah made an effort to stay connected to his friends, his family, and his loyal fans.

Mikah said one of the biggest lessons he learned on the road was the importance of having someone by your side to share in the ups and downs.

“You can be in one of the most beautiful places in the world, but it don’t mean a darn thing if you don’t have someone to share it with you,” he said. “I used to think that the answers to all my problems were out there and could be solved by going to all these amazing places, but what kept me going on this journey was the people I heard from.”

When you look at jaw-dropping photos on social media, it’s easy to imagine that every moment of a road trip or vacation is full of excitement, but Mikah told us that the reality is much different from the rosy pictures. He experienced travel fatigue, felt lonely, and thought about giving up sometimes, but his fans continually lifted him up and kept him going to the end.

Mikah received messages from people who had lost a parent and related to his journey, and he also connected with LGBTQ+ youths who said they had never seen a travel blogger like him. This community gave Mikah the meaning and purpose he was looking for in his travel experiences.

Now Mikah has dedicated himself to sharing the lessons he has learned and encouraging his fans to go live their own dreams with the people they love the most.

“Really, what this trip taught me was that it’s more important to have a community where you live and where you travel,” Mikah said. “You can stare at a sunset, but you can’t hug it, and it can’t hug you back.”

The Motivational Work Continues at Home & Beyond

After spending three years on the road, Mikah was happy to put down some roots and share his experiences with those back home. He has settled in Minneapolis, Minnesota, and has begun shifting his focus from travel blogger to motivational speaker and LGBTQ+ advocate.

Mikah has landed over 150 speaking engagements from New York to New Zealand, and his message has resonated with many diverse audiences.

“I was struck by how both students and staff clearly connected with him and his story,” a representative from Penn State University said. “I really cannot say enough good things about the topics he engaged, the way he related to the audience, and how he shared his complex and powerful story.” 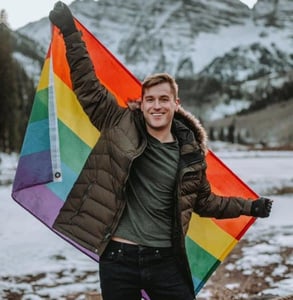 Mikah has taken the rainbow flag to many different parts of the U.S. and shown support for the LGBTQ+ community.

As a well-traveled gay man in his 30s, Mikah can speak with authority on a number of topics. He has urged students to follow their dreams and live with passion, and he has encouraged corporate leaders to focus on diversity and inclusion in their hiring practices.

Mikah has shown his allegiance to the LGBTQ+ community by posing with a rainbow flag at many U.S. National Park Service sites, and he lost a sponsorship with an outdoor organization because of it. In 2017, he wrote an op-ed for Outside Magazine pushing for greater LGBTQ+ representation in the outdoor industry.

“I was shocked when outdoor nonprofits told me I was a revolutionary simply because I was an openly gay man publicly sharing my love for the outdoors,” he wrote.

Many of Mikah’s followers have thanked him for being so open and visible as a gay man who loves the outdoors because his actions have made them feel seen. By waving a rainbow flag on a glacier or in the wilderness, Mikah can show that these spaces aren’t just for the stereotypical he-man — they belong to every American who enjoys the great outdoors.

While Mikah has had to scale back his speaking schedule in light of the 2020 pandemic, he told us he has a COVID-proof project in the works to run across Minnesota and highlight the need for greater inclusion in the outdoor industry.

Since he was a teenager, Mikah has endeavored to make the most of his time in the world by trying to cover as much ground and soak in as many once-in-a-lifetime experiences as possible. With every impressive road trip he’s taken, Mikah Meyer has broadened his horizons, seen some incredible sights, and learned a lot about himself along the way.

Many couples talk about taking that dream vacation and seeing the world, but sometimes they don’t make the time or put in the effort to follow through on those dreams before it’s too late. As an experienced travel blogger and public speaker, Mikah said he hopes to show people what’s possible and encourage them to go on that life-changing road trip, enjoy a romantic getaway, and spend every day making memories that’ll last a lifetime.

“I want to share the lessons of this journey with others so they can be inspired to get out there too,” Mikah said. “So, really, this journey gave me a life mission.”