The Scoop: Getting back into dating after having been removed from the scene for a while can be difficult, but it can be especially fraught for singles over 50. That’s why author and syndicated columnist Tom Blake created FindingLoveAfter50.com. For nearly 25 years and with more than 3,900 published articles and newsletters, he’s provided advice on a variety of topics, including how to navigate dating after becoming widowed or divorced.

Tom Blake’s career as a relationship columnist and founder of FindingLoveAfter50.com dates back to the fateful night of Christmas Eve 1993. He was visiting his 90-year-old mother 11 hours away from his home in Santa Rosa, California, when he received a call from his wife. He asked how she was, and she told him that the weather was cold and she was busy with work.

Then she dropped a bombshell. She said she had packed up all her belongings and was moving out. Shocked and in disbelief, Tom used the long ride home to try to figure out what had gone wrong.

“I had a notepad on my lap, and I tried not to be too distracted to drive,” he said. “But I was writing rough notes of my thoughts about why this happened. Then came the divorce, and all the time I was taking notes. At night, I would write it all down.”

Tom Blake shares his dating and relationship advice through books, articles, and on his site FindingLoveAfter50.com.

When Tom started dating again, he learned the hard way how tricky it can be to navigate the scene in your early 50s. However, his tribulations soon provided him enough material to write a short story. He sent it to Playboy, Esquire, and the New York Times, but editors seemed disinterested. Then, he sent it to the Orange County Register, whose editor suggested he contact the paper in his town of Dana Point, California. He met with that paper’s editorial team and pitched them a column about a single guy at 53 who was trying to date again. They loved it, and Tom’s column began.

“They told me to write four articles, and they’d put them in the can. I didn’t know if that meant a toilet or what,” he said with a laugh. Tom soon understood that “in the can” was newspaper jargon for creating a backlog of ready-to-print articles.

“It started at one paper and grew to 10 papers that were owned by the Register, plus the Register itself, and that lasted for 17 years,” he said.

Today, Tom writes for a pair of newspaper chains in addition to producing a weekly newsletter filled with advice and discussions about issues facing older daters. He’s also written numerous books and has been invited on national television shows to share the friendly, practical wisdom he’s learned from his years of senior dating experience.

An Expert With a Long Career of Advising Senior Daters

Today, Tom’s column is published weekly in a chain of Southern California papers owned by Picket Fence Media, including the Dana Point Times, San Clemente Times, and the Capistrano Dispatch. He also writes bi-monthly for a newspaper chain in Pennsylvania published in Chester, York, Dauphin, Lebanon, Cumberland, and Lancaster counties.

“I’ve never made it my goal in writing to be famous nationwide. It’s important to know that I’m helping people in my community here in Orange County,” he said. “I don’t write to toot my own horn. I write because people express that they really enjoy it and have learned something or met someone through what I’ve recommended. That gives me a warm, glowing feeling.”

Tom has written books not only about dating after 50 but also about his friendship with Johnny Cash.

He’s written many books as well, which are all available on his site. His books focus on widowers, how to start dating again, and even who pays for the date. Tom has written a book based on interviews with 50 couples who have found love after 50, a few ebooks, travel pieces, and even a book about the
Victoria Station restaurant chain and his friendship with legendary musician Johnny Cash.

But Tom’s most popular means of sharing his advice with his faithful followers — he calls them “Champs” — is through a weekly e-newsletter he sends out to subscribers throughout the United States, Canada, and even the United Kingdom.

“When people get something by email, they can respond immediately and send it off. If they read it in the newspaper, they say they’ll contact that guy tonight or tomorrow, and then it doesn’t happen,” he said. “I get much more feedback from my newsletter readers — and it’s free.”

Ideas for Columns and Newsletters Come From His Audience

Because Tom makes it so easy for his readers to communicate with him, he has a steady stream of story ideas. Often, readers inspire his next column.

“I’ve written 3,900 articles, including newsletters and newspaper articles,” he said. “So I’ve pretty much heard it all, but there’s always a new twist on old topics.”

One new trend in the senior dating world is known as “LAT,” or living apart together. Tom said he’s been getting a lot of questions about the relatively new concept. He’s also seen a trend of substituting the word “retired” for “elderhood” — which promotes the idea that this phase of life is just as important and nuanced as adulthood and childhood.

“As my audience gets older, it gets harder for women to meet someone because of the ratio of single women to single men. When they get up to 70, the single women outnumber single men by about four to one,” he said. “And my women like to say, tongue-in-cheek, that not all of those men are relationship-material.” 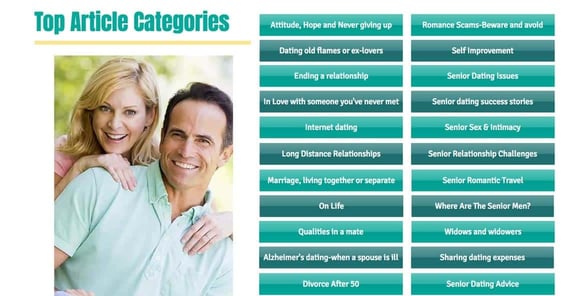 Many of Tom’s past newsletters and columns are available on FindingLoveAfter50.com.

So Tom writes about many topics that are meaningful to women, including how to make friends with other women who can relate to them. Another issue he covers is how to find love in small towns and remote areas.

“I often ask readers where they’re meeting people in small towns, and they say, ‘I go to Joe’s Bar and square dancing.’ I tell them they probably should go on the internet,” he said. But he also warns of the drawbacks for seniors on the internet, because people know that they’re lonely — and vulnerable.

Tom said loneliness is becoming an epidemic among the senior population in America. He stressed the importance of older residents finding friends and loved ones with whom to surround themselves.

Tom Blake: New Articles, Books, and a Website in the Works

Although Tom has experienced divorce and embarked on many interesting dating experiences after 50, he’s currently in a happy relationship. He met Greta 21 years ago, and they live together. The couple recently returned from an 82-day cruise across the Pacific Ocean and Asia. He blogs about their experiences on his dedicated adventure website, TravelAfter55.com.

This year, he plans to continue sharing his practical advice in newspaper columns, as well as through his weekly e-newsletter. He’s also working on updating his website with even more regular columns and content.

He also has his next two books lined up. The first will be a memoir about owning his deli, which he calls a “‘Cheers’-type place,” referencing the popular sitcom. The second is a relationship book geared toward those over 65.

“I have people in their 90s who tell me they want to meet somebody,” he said.

Tom documents his world travels with Greta on his adventure site TravelAfter55.com

He’s also open to media queries, after having appeared on Good Morning America, Fox & Friends, and The Today Show to share his expertise.

When he was cleaning out his garage recently, he discovered boxes of old columns he wrote 10 to 20 years ago. He’s excited to go back through and see what topics still hold true today.

Plus, Tom said, he always finds new ideas and topics through his own experiences.

“I have a lot of mileage, and it’s not always great stuff, but it really helps,” he said. “Sometimes I get an email, and, at the end of the first paragraph, I know it’s a column. That’s because I’ve written so many.”