The Scoop: EVRYMAN started as a podcast in the spring of 2017, and it evolved into a movement to teach men how to become the best version of themselves. Thoughtful male leaders have come together in Drop-In Groups to talk about what it means to be a compassionate man and how empathy can transform personal relationships. Thanks to its diverse coaching resources, EVRYMAN has empowered men to be vulnerable and share what’s on their minds and in their hearts.

As the Co-Founder of EVRYMAN, Dan Doty encourages men to be authentic and express their feelings in healthy ways. This emotional work is his life’s passion, and he has spent over 15,000 hours coaching boys and men from all walks of life.

In his early 20s, Dan started his career by working as a wilderness therapy guide. He taught survival skills and life lessons to underprivileged young men on outdoor trips that lasted up to 50 days. During that time, he had the opportunity to get to know the boys and learn about their struggles.

EVRYMAN fosters a healthy dialogue about how men can improve themselves.

Most of the boys came from broken or dysfunctional families, and Dan could see the negative impact their home lives had on their interpersonal and communication skills. Even something as simple as a father-son activity could become strained because of their repressed emotions, poor role models, and disconnection from open-hearted love.

“It left an indelible mark on me,” he said. “It struck me that these programs are really helpful, but they wait until a crisis to give men these skills. I took a more proactive approach.”

That experience set Dan on a path toward emotional growth and self-awareness. A few years later, he went to a men’s group to work on his own emotional blind spots and become a better partner, friend, and mentor. He learned from emotionally attuned men how to build close human connections, and he changed his life by strengthening his ability to express love.

Today, Dan is happily married, the father of two sons, and the leader of the EVRYMAN community. EVRYMAN publishes podcasts, organizes group events, and provides coaching resources that help today’s men build the skills they need to maintain healthy friendships and relationships.

“When I began to feel and to understand, it changed everything,” Dan said. “It was clear to me that we had something that was helpful, not just for guys, but for all the people around them.”

In April 2017, Dan co-founded EVRYMAN alongside three men who shared his passion and vision for the future. They started by running retreats for men and expanded into podcasting to spread their message.

By sharing stories and asking questions, the EVRYMAN podcast opened a dialogue about how men conduct themselves and relate to others. Whether they’re discussing the NFL, yoga, or fatherhood, the podcasters and their guests provide insights on the obstacles and opportunities facing the modern man.

EVRYMAN has published 125 episodes to date and offers this content for free on Spotify, Apple Podcasts, Stitcher, and Overcast. Dan said listening to the podcasts is a good introduction to what EVRYMAN is all about.

On Tuesday nights, EVRYMAN hosts a Global Community Call with guest speakers answering questions, sharing stories, and teaching best practices. This event typically lasts 75 minutes and has hundreds of participants all over the world. Check out the events calendar to find out about upcoming community calls and group meetings.

In addition to podcasting, EVRYMAN has organized Drop-In Groups that empower men to explore their emotions in a nonjudgmental space. Anyone can find a local group on the website and drop in on the next meeting. These support groups are free and open to men of all backgrounds.

Dan said the Drop-In Groups give men a chance to slow down, get in touch with their feelings, and speak their minds. As men share their experiences, they grow closer to each other and realize that being vulnerable can actually strengthen social bonds.

Every man can improve his relationship skills by taking EVRYMAN’s lessons to heart and being emotionally aware in every conversation.

“The most common thing I hear is that men are struggling with dating and relationships,” Dan said. “By getting into a men’s group, they can start to do the work, become comfortable with who they are, and learn how to express themselves honestly and authentically. Those are some of the most valuable tools for dating.”

EVRYMAN began by talking to men, and now it is creating ways to talk with men and bring new perspectives and insights into the conversation.

In recent months, EVRYMAN created a membership program to support men on their journey of self-improvement. They currently have over 470 members and are growing rapidly.

The EVRYMAN membership includes unlimited Drop-In Groups as well as access to special seminars, classes, and themed support groups. Members can also embark on the Fundamentals course with the guidance of trained leaders who check on their progress.

The membership platform excels at helping men grow, and it offers Group Launch Training to encourage them to start men’s groups in their neighborhood. EVRYMAN has the knowledge, resources, and community to support individuals looking to spread kindness in his own way.

EVRYMAN hosts in-person and online groups that support all types of men.

Dan told us EVRYMAN has seen more themed groups popping up to create safe spaces for men of color and GBTQ+ men. Some groups speak directly to fathers, professionals, or single men, but they all share a core message: You aren’t alone.

EVRYMAN prompts men to be more introspective and talk about the emotions that drive them forward or hold them back in life.

“Attending an EVRYMAN group is literally like going to the gym to be better at relationships in every way,” Dan said. “When a man is connected to his empathic nature and is willing to actually listen, he’s a safer date, he’s a better date, and he’s far less likely to do something harmful or hurtful.”

Reaching Out to Men of All Ages & Orientations

Anyone who identifies as a man can join the EVRYMAN community. Its members span all ages, races, and orientations, but they share a common impulse to connect and grow. Whether speaking to a 21-year-old single or a 55-year-old father, the EVRYMAN mentors strive to meet men where they’re at in life.

“We call it EVRYMAN for a reason, and we mean it,” Dan said. “We want anyone and everyone to feel included.” 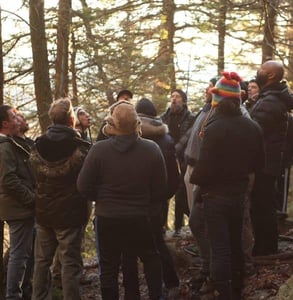 EVRYMAN encourages men to bring down their emotional walls and build heartfelt connections with one another.

Dan said he’s particularly proud to see young men taking the EVRYMAN mission seriously and carrying its lessons into their relationships. Men in their 20s often face important life decisions, and they can rely on EVRYMAN for help choosing the right path. Dozens of men have reached out to Dan to say they found the courage to propose or to start a new career because of the EVRYMAN community.

One young man at a Drop-In Group shared that he hadn’t gone on a date in six years because he’d been hurt by someone in the past. The group work helped him rebuild his confidence and take a leap of faith — and now he’s in a healthy relationship.

“We’re really just helping guys know themselves better and tap into their empathy. And that’s a wildly helpful dating tactic,” Dan said. “At their core, men want to be better partners, better colleagues, and better friends, and we give them the tools to actually do it.”

Looking to the future, Dan said he hopes to inspire a new generation of men who aren’t afraid to talk about their emotions and open their hearts to the people in their lives.

EVRYMAN Helps Men Get in Touch With Their Feelings

Dan found his calling when working with young men in the field, and now he has made a career out of talking about emotions and relationships from a modern man’s perspective. EVRYMAN inspires men to wear their heart on their sleeve and use their empathy to become more loving husbands, fathers, brothers, and friends.

EVRYMAN delivers a positive message to men everywhere and inspires personal growth in all aspects of life. By building their emotional skill set, men can set themselves on a path to happiness and create relationships that last.

“We’re basically giving men permission to let go of the old stereotypes,” Dan said. “It’s our goal to show that we don’t lose our man card when we are empathetic, vulnerable, kind, and loving.”