Writer, Teacher, and Healer: Susan Peabody Helps Love Addicts and Those Spurned by Them

The Scoop:  Susan Peabody helps clients who are addicted to love through her website BrighterTomorrow.net. According to her definition, a love addict is someone who obsesses about love and then is unable to let go when a relationship ends. A recovering love addict herself, Susan has devoted her career to helping others solve the problem. The writer, teacher, and healer has published books and workbooks on the topic and also meets with clients one on one to teach them how to deal with their issues.

When Susan Peabody was a young woman, she said she was always chasing after one man or another. She continually fell in love with men who didn’t return her affection or were simply unavailable. And even if those men didn’t reciprocate her feelings, Susan said she was often willing to behave like someone she wasn’t to demonstrate her affection for them.

But, no matter how hard she tried, it never worked.

Eventually, Susan said she realized that she couldn’t keep falling for unattainable men. She also recognized that she had a problem: She was addicted to love. She called the obsessive behavior love addiction and admitted that her actions were unhealthy.

“I chased after love and the men who I was in love with,” she said.

Susan attributed her inability to pursue healthy romantic relationships to her unstable childhood.

But her love addiction also led to her calling: helping others heal through books, one-on-one sessions, and her website, BrighterTomorrow.net.

“When I got into recovery, I was very ashamed of what I did. I abandoned myself to pursue the love I didn’t get as a child,” Susan told us.

Eventually, Susan joined a group for individuals with other types of addictions — including gambling and alcohol. But she soon discovered that members of those groups didn’t understand her particular dependence.

“I felt they were judging me because they didn’t understand,” she said.

So, she searched for a recovery group specifically for people who were addicted to love. Once Susan found what she was looking for, she discovered that connecting with others over shared experiences could diminish her shame. That’s also why she co-founded another support group, Love Addicts Anonymous, in 2004.

Now, she helps others learn to overcome their addictions through personal sessions, workshops, and books.

Susan is so passionate about love addiction because she doesn’t think society sees it as a significant problem. She also feels that her background gives her the insight and understanding necessary to support others in the same situation.

That is why Susan has written several books on the subject. One of the most popular is, “Addiction to Love: Overcoming Obsession and Dependency in Relationships.” 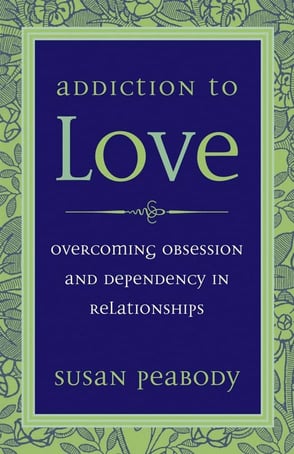 One of Susan’s most popular books is “Addiction to Love: Overcoming Obsession and Dependency in Relationships.”

According to the Amazon description of the book:

“Love addiction manifests in many forms, from Fatal Attraction-type obsessive lust to less extreme but nonetheless psychologically and emotionally harmful forms. The most common of these is staying in a bad relationship because of a fear of being alone — the ‘I hate you but don’t leave me’ relationship.”

As a companion to that book, Susan also developed a workbook called “Recovery Workbook for Love Addicts and Love Avoidants” that allows addicts to consider their issues individually. As they work through the book, readers learn to set goals, take stock of what they have, what they want, and journal regularly. The book has chapters on self-esteem, behavior, and creating better relationships.

In addition to her published books, Susan maintains an in-depth blog where she writes on several topics. In a recent post, “Is it Love or Is It Addiction?,” Susan asks readers to decide if they have love addictions or a healthy relationship.

“If it is addiction, relationships are painful, and you are unhappy after the honeymoon is over. Love is unrequited. But you can’t let go,” she writes.

Why Some People Fill Emotional Voids With Romance

Susan also works with individuals who want to talk one on one — or in a group — about their experience. As a one-on-one healer, Susan emails, Skypes, or speaks with clients over the phone about their issues. Susan begins the first session by determining whether the client is a love addict.

Susan also makes it clear that she isn’t a therapist by training; instead, she’s a teacher who helps her clients adopt more productive behaviors. She also hosts intensive three-day workshops around the world to help people delve into their issues.

“In 2014, I began working as a concierge teacher. I have been to Switzerland, and my last client flew in from Germany. And if people want to schedule a three-day workshop, I can come to them, or they can come to me,” she said.

The workshops emulate the supportive group sessions that Susan participated in years ago. And participants can help each other cope with low self-esteem and ambivalence.

Additionally, Susan hosts six-week training for therapists — whom she calls “wounded healers” — about the ins-and-outs of love addiction. Susan said she feels particularly passionate about those workshops because that is how she got started helping others.

“Once I started my journey as a healer, I identified as a wounded healer. It makes for a whole new category of healing,” she said.

In both her counseling and workshops, Susan encourages clients to focus on the shame they feel.

“I thought romantic love would fix what happened to me as a child, but it doesn’t work that way. That’s a big part of addiction — the shame. When I’m working with others, the shame totally disappears. I’m making lemonade out of lemons,” she said.

Drug addiction or sex addiction are well-known issues, but Susan strives to raise awareness of love addiction, which affects people around the world. Recently, she’s found a more global audience and has seen her books translated into both Russian and Italian.

And Susan is passionate about her mission because many love addicts don’t recognize the issue, and instead believe that they are failures in love. She also suggests that adults who were hurt as children are more likely to fall prey to love addiction.

“Because they’re wounded, they’re very needy and vulnerable to being attracted to somebody without getting to know them. Or they can’t let go of a person or relationship,” she said.

Those adults may fixate on the idea that a romantic relationship can remedy their feelings of abandonment. However, even if they were t find a perfectly loving partner, those feelings won’t disappear, since they haven’t addressed the root cause of their issue.

The addiction can disrupt their entire lives because, as Susan said, “the whole world is about relationships.”

Some people recognize they fit the description of a love addict and think there’s no hope for them to have a healthy romantic life. But Susan wants them to know there is hope for them, too.

“There is hope if you’re suffering from love addiction. You are living in a good time because there’s so much help out there for you,” she said.