The Scoop: In recent years, Transformation Coach Leeza Steindorf has noticed a significant change in her clients. They’ve become increasingly more eager to put in the hard work necessary to improve their relationships — both in love, life, and business. As a result, Leeza has found that she can work more deeply and effectively with people. She’s also branched out with a television show, online training courses, and, soon, blog posts on popular media platforms.

Transformation Coach Leeza Steindorf has noticed a change in her clientele. Now, more than any other time in her 20 years in the industry, Leeza said that people come to her ready to do the hard work necessary to create dramatic shifts in their lives.

They come prepared to transform their relationships with loved ones, business colleagues, and, more importantly, themselves.

“It makes my work a lot easier. In the past, when people were complacent, they weren’t ready to jump in,” she said. “I often had to work to excavate what was going on. But, when we start at this point, I can help a lot more. We can go deeper, faster, and farther.”

In a time when so many people are calling themselves coaches, Leeza continues to be a leader in the industry. She’s designed the CORE Success™ Transformation System and has seen success using it with clients from more than 30 different cultures. She works from a place of non-judgment with a client-centered, humanist approach.

Leeza Steindorf helps people transform themselves from within so they are ready for success.

Clients appreciate her Socratic dialogue skills and enjoy learning her methods. Leeza specializes in connected communication and is an experienced facilitator, an executive and life coach, and a Forbes Coaches Council member.

Along with her extensive training, Leeza pulls from her own life experiences to guide clients to truly understand — and love — themselves before finding happiness in interpersonal relationships.

“You have to have a certain level of skill, education, and training to accomplish that,” she told us. “Coaching, as a term, has become a bit too overused by people who are not trained to do so. But there is a need.”

Beyond working individually with clients, Leeza has launched an online training programs through Teachable that allow clients to review what they learned in their group or private sessions — and even share the takeaways with loved ones.

Courses include the Parenting Success Blueprint and Impactful Communication training sessions, which provide people with the tools for engaging in conversations productively.

Another popular program is called Connected Communication, through which Leeza shares the keys to authentic interaction. Many of her programs are designed to help clients address concerns they face both in the workplace and at home. She even offers her Genius of Non-Judgment program for free.

“I wish everyone would take it,” Leeza told us. “I grew up in violence, and it was hard to learn to like myself and love myself. But I did it. Then, I had children, and I had to start over again because, at first, I was a horrible parent.”

It took a while, but she worked through patterns to understand the true value of shining her inner goodness into the world. Leeza said she sees so many people struggling to appreciate their inner beauty. Her programs are designed to share best practices and tools to make that easier.

“We’re afraid to be truly, authentically who we are in the world because there appears to be so much bad, ugly stuff,” she said. “But, when we realize we are good and we let our amazingness come out, other things fall away and lose their importance. It’s an upward spiral, a self-propelling dynamic.”

Another way that Leeza reaches out to a broader audience in her Portland community is through public television with “Live with Leeza.” For an hour and a half, she conducts a training session with a live audience and broadcasts it to viewers at home.

In her most recent show, Cracking the Mask, Leeza focused on the art of being yourself and feeling safe and free being radically authentic, which she broke down to four simple steps. The show will air in late Novermber 2019 for audiences in the Portland area.

As part of the program, Leeza features an area nonprofit with a mission that she supports. In the past, she’s highlighted the Raphael House, which helps women who have experienced domestic abuse. She’s also featured the Rebuilding Center, which collects recycled wood and furniture from torn-down houses and either sells it or uses it to help teach carpentry skills to members of the community. 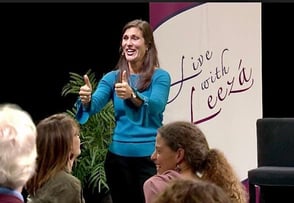 “Live With Leeza” takes a studio audience in Portland through a transformational training session.

“The audience gets engaged with questions. It’s fun,” she said. “Eventually, the content will be up as a course on Teachable. It’s been twice a year, but we’re looking at making it quarterly.”

One idea that Leeza is working on with a producer is a show addressing the differences between men and women. She plans to host a panel discussion, first with women, in which they’ll talk about relationships, sex, work, and changes in life. Then, she’ll host a panel of men and ask them the same questions. She thinks it will be very enlightening and interesting to observe the differences — as well as the similarities. Her ultimate goal with the show is to help build trust between men and women.

“I work with a lot of couples, and my advice is to believe each other, to not wait for the other shoe to drop,” Leeza said. “You have to give full trust. If you go in with distrust, you ruin the opportunity.”

As Leeza’s clients grow more prepared and receptive to her coaching and guidance, she has expanded the mediums through which she connects with them. Along with her television show, she’s starting to write more, and will soon have an informative blog to share her wisdom. December 2019, she will begin contributing articles to Forbes.

The idea is to create a platform where clients from around the world can not only ask questions but also create a community of like-minded individuals interested in bettering themselves. The goal, she said, is what she calls “self-studentship.”

“Everyone should realize that they are their own expert. It doesn’t mean we don’t need help with certain things or that we don’t have blind spots. That is why coaching is so impactful,” Leeza told us. “When, you become the content of your own study, that’s the best thing you can do for yourself. Whether it’s a relationship or business or friendship, it will be enriched because you’ll have a clearer idea of yourself.”

One of Leeza’s executive clients provides a good example of how her strategy works. They worked together on his professional approach, but soon it was clear the sticking point for the client was a fear of authenticity.

As he started to understand how to truly be himself, Leeza watched as his business and personal relationships strengthened, and he relaxed. He even ended up getting a promotion, she said.

“If you want to contribute to a relationship in a meaningful way, first figure out how to love yourself fully, and then bring that other person to the table,” she said.