The Scoop: Since 2004, the iDate Conference has been circled on the calendars of dating experts across the industry. Everyone from major dating site operators to small-town matchmakers attends these global events, and they come away having learned about new marketing strategies and technology that could help them. By offering businesses plenty of networking opportunities, iDate has helped dating professionals thrive and bring added value to singles around the world.

The dating industry doesn’t operate on cutthroat competition and kill-or-be-killed business models. It’s more like a friendly suburb where people are always willing to throw open their front doors and welcome strangers into the fold.

Many dating professionals bring a help-or-be-helped attitude to their businesses and are eager to collaborate, even with competitors, so they can make the dating scene a better place. 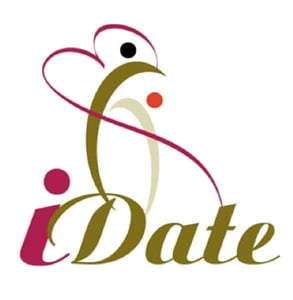 Yet for a long time, dating professionals didn’t have a way to reach out to one another. The industry may be small, but it’s widespread. Dating services exist everywhere singles do (which is to say, everywhere), and there wasn’t really a universal industry directory to help newcomers get in touch with the major players halfway around the world.

That’s where the iDate Conference came in. Since 2004, this global networking event has united dating professionals and offered an engaging space where they can share ideas and learn from one another.

Whether it’s held in Los Angeles, Hong Kong, or London, the energy at the iDate conference is positively electric. You can see matchmakers sharing best practices, online dating operators making deals, and experts from a variety of fields bringing revolutionary ideas to the dating industry.

The big question at the end of the day is “Did you get any ideas from this event?” Most attendees say they have gotten one or two good ideas and look forward to collaborating with the professionals they’ve met.

“The dating industry is full of good-hearted people on all sides,” said Marc Lesnick, Founder of iDate. “That’s what I like about this industry. I enjoy the people I do the events for, and it’s nice to see them leave happy, having learned something they didn’t know before.”

The dating industry has ballooned in size with American dating services bringing in approximately $2.5 billion in 2015. Online dating has become mainstream — even popular — and the floodgates are officially open. While big companies dominate the market, no one platform can satisfy singles for long. That means somebody with a great idea for a dating app could grab a decent share of the pie.

It’s an exciting time to be a dating site operator, matchmaker, or dating coach because there are so many opportunities to innovate and become the next big thing.

Since its first event in 2004, iDate has offered informational panels and networking events to expose the next big thing. These events put industry leaders in touch with outside experts in marketing, technology, and other fields, and they foster a serious discussion about how the dating industry could better serve customers and bring in profits.

Artificial intelligence will be a major focus at L.A.’s annual Mobile & Artificial Intelligence Dating Industry Conference, which will be held in June 2019. According to Marc, who has organized all 55 iDate conferences in the last 15 years, AI could be a game changer for dating operators. “You can already see the power and the potential it has,” he said. “It can bring a lot of value to the industry, but it’s going to take a lot of data over a long period of time for it to become effective.”

It’s Marc’s job to stay on top of the latest trends and identify areas of growth for dating services. He reaches out to professionals in management, software, venture capital, publishing, payment process, and a variety of other areas, and he puts them all in the same room to see what opportunities come out of it.

Across the board, iDate has been a recipe for success and has helped self-starters and mid-level companies improve their brands and build a national or international reputation.

“The ones who attend iDate tend to be the most successful in their businesses,” Marc said. “They always say, ‘If you’re not at iDate, you’re not in the industry.'”

Over the years, iDate has hosted 55 events geared toward matchmakers, online dating operators, international dating professionals, and others in the industry. It has taken over conference areas in Delray Beach, Hong Kong, Sydney, and other major cities. This year, iDate will host events in Kiev, Los Angeles, and London to spread the word about the best practices in the dating industry.

Hundreds of professionals get together at iDate to propose new ideas, develop working partnerships, and learn about the latest technology and developments in the dating industry. It’s a healthy mix of newcomers to the industry and established companies with decades of experience to share. The seasoned professionals can obviously share trade knowledge, but they can also learn a thing or two from the self-starters who bring a new perspective and ambitious ideas to the table.

All in all iDate offers a space where movers, shakers, and dealmakers come together and build the future of online and offline dating. Many heavy hitters have shown up to close deals and pitch ideas, and the educational panels inspire attendees to tackle their work with enthusiasm and proficiency. 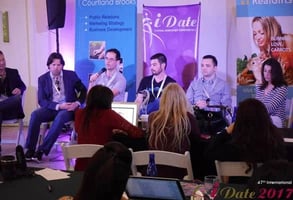 Marc told us he always wants to bring the wow-factor to the iDate schedule. It’s not some dry list of mid-level professionals. It’s not a set schedule. The event speakers highlight the individuals and companies making an impact. It includes executives and consultants who have achieved a high level of success in their fields and can bring revolutionary insights to improve other businesses.

In 2013, Dr. Neil Clark Warren received the Lifetime Achievement Award at iDate in recognition of his work on eharmony. This award has only been given out a handful of times because it honors an industry leader who has changed the dating scene for the better and helped other businesses thrive.

“You try to help [singles] find that person, and then make that work for you as a business,” Dr. Neil Clark Warren said in an interview at the conference. “It’s going to take a very thoughtful approach to the world… so we’ll have to work on that. It’s a challenge.”

Such a challenging proposition as helping people fall in love isn’t going to be solved by one person in one room — it’s a movement that everyone in the industry pushes toward with every new communication feature, match algorithm, marketing tool, and business strategy.

“Trying to help people be successful and make money has been key to our success,” Marc said. “It’s more than just creating a friendly environment. We want to give dating operators what they need, which is more traffic and more revenue.”

Even After 15 Years and 55 Events, iDate Continues to Grow

The dating industry has grown substantially in the last decade or so, and iDate has grown along with it. The conference’s panels, lectures, and networking events give self-starters a chance to learn something new and partner up with more established businesses — and many in the industry have jumped in with both feet.

Every year, iDate hosts productive brainstorming sessions between the current and future leaders in the industry. Its events bring dating experts together and challenge them to consider what they can do to increase customer satisfaction and turn a profit.

Ultimately, the dating industry has thrived because the people in it are willing to work together and learn from one another’s experiences. That spirit of collaboration is alive and well at iDate, and that’s what makes it so useful to businesses in need of a little push.