Social Fixer™: How the Browser Extension Can Save Dating Professionals Headaches on Facebook

The Scoop: Social Fixer is a browser extension designed to improve Facebook by removing ads, organizing posts, unlocking hidden messages, and offering other customizable filters for the interface. A coder named Matt Kruse developed this Facebook solution as a passion project in 2009, and now over 1 million people have used it to streamline their newsfeeds. Dating professionals can download Social Fixer for free and use it to enhance their social marketing efforts and grow an online following.

Many dating professionals know social media is an important and powerful marketing tool, but they don’t necessarily know how to use it. Social is a new medium, and many businesses are still figuring out how it works and how it can work for them.

The sheer size of many social media platforms can overwhelm professionals in the dating industry. Starting a social media account without knowing how to target and connect with your audience is like sitting on a boat in the middle of the ocean without knowing how to direct your sails or row toward your destination. You may stay afloat, but you’re not really getting anywhere. 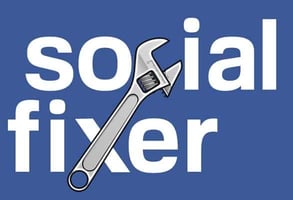 Social Fixer is a streamlined solution for Facebook users feeling frustrated by the cluttered interface.

We don’t want today’s dating professionals to be at the mercy of the tides of social media, so we sat down with digital pioneer Matt Kruse to see if he could help.

Matt designed a browser extension called Social Fixer in 2009 to help people navigate Facebook more efficiently, and modern businesses can use this user-friendly tool to streamline their online marketing efforts.

Social Fixer is available for free on all major browsers, and anyone can make a donation to support this crowdfunded project.

“It’s difficult for businesses to wade through the noise on Facebook,” Matt said. “Social Fixer can highlight and find the things you’re looking for, so you can communicate with your audience.”

Small businesses, in particular, were much more likely to disagree with the statement, “My Facebook marketing is effective.” A whopping 96% of businesses use social media as a marketing tool, yet it isn’t always a slam dunk for these professionals. 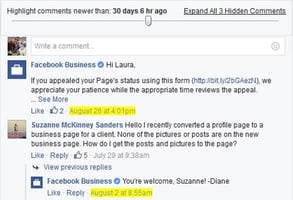 Facebook’s comments section can be particularly tricky for professionals with large audiences. Recent comments can get buried in the collapsible drop-down section, and it’s difficult to engage with someone if you can’t easily find what they said and when they said it.

Social Fixer can make the conversation flow more easily between businesses and clients by implementing a fix to the comments section.

The Comment Navigator tool adds a timestamp to comments and highlights the most recent responses in the conversation. Instead of collapsing lengthy comments sections, the browser extension expands everything and lays it out with a slider to help you find particular comments.

“Facebook doesn’t make it easy to follow long, in-depth conversations,” Matt said. “Social Fixer can help people keep up to date on conversations by showing those nested comments and giving the exact time of each post.”

Social Fixer started out as a personal tool. Matt used his creativity to build programs and fixes he thought would be useful on his personal Facebook account. Removing the ads, for instance, gave the site an overall cleaner appearance. He also removed political posts from his newsfeed, which allowed him to stay out of heated debates.

Over time, Matt realized his shortcuts could make many digital lives easier, and he started sharing his programs with others on the web. That’s how Social Fixer, originally known as Better Facebook, was born.

“I was surprised to see that a variety of people can use it in different ways,” Matt said. “Everyday consumers use it to clean up their social media pages, and businesses use it to help them communicate with an online audience.” 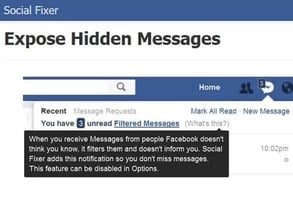 Social Fixer can reveal hidden messages sent from people outside your friends list.

One of Social Fixer’s most popular features is the ability to access messages sent by people outside your contact list. Facebook traditionally sends such messages to a hidden folder, labeling them as spam, and users don’t receive so much as a notification about them. But not everything in that secret inbox is fake news. Sometimes an old childhood crush reaches out with a message, or a distant relation tries to make contact.

Business owners and entrepreneurs often receive messages from people outside their social circles, and those messages can sometimes turn into business opportunities — but not if they go unread.

Social Fixer allows you to access these messages and make contact with everyone on the platform, even if you’re not officially friends. Matt said many heartwarming stories have come out of this tool, including one man who said he reconnected with a high school friend after seeing a message pop up in his inbox.

Social media gives dating professionals a platform where they can communicate with their followers and receive glowing testimonials and thank-you notes. It’s natural to want to share such success stories with the world, but dating professionals often have to keep the specifics to themselves to protect the privacy of their clients. 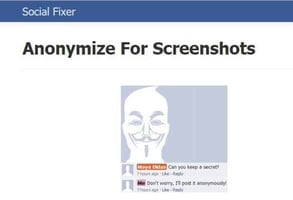 After all, not everyone is willing to take their love story public and admit they hired a matchmaker, dating coach, or therapist. So, the question becomes, how do dating professionals prove themselves to potential clients without divulging the personal details of former clients?

Social Fixer has a solution. It can replace all Facebook user names and photos on the screen with randomly generated text, so you can take a screenshot of the comment without revealing anyone’s true identity. The Anonymize Screen function can help dating professionals share testimonials in a discreet way.

According to the website, “It replaces all names, profile pictures, and other identifiers with generated text, making it a one-step process to scrub your screen before taking a screenshot.”

Social Fixer Allows You to Filter Out the Noise

Dating professionals who feel adrift on social media platforms can use Social Fixer to anchor themselves and set a course toward a more gratifying experience on Facebook. To date, this browser extension has empowered over 1 million people to organize the chaos of social media one widget at a time.

Social Fixer’s ever-growing library of features allows users to customize Facebook from the newsfeed to the comments section. Dating professionals can use this tool to highlight what’s important to their businesses and dismiss or hide extraneous information. By focusing on the online community and engaging in organic ways, dating experts can send a powerful and compelling message on social media.

“A key thing for businesses is to be able to monitor conversations in the comments sections of their social media platforms,” Matt said. “Social Fixer allows you to quickly find relevant comments and interact with users.”