The Scoop: The Society of Citizens Against Relationship Scams (SCARS) is the vanguard in the fight against online scammers in the dating industry. This nonprofit organization advocates for victims of romance scams and provides educational resources as well as peer-to-peer support groups where individuals can share their experiences as part of the recovery process. The online security experts at SCARS have partnered with law enforcement agencies and online dating companies to develop and improve systems that will protect online daters who are putting their hearts on the line.

In 2010, Debby Montgomery Johnson lost her husband of 26 years to a sudden heart attack. She poured her energy into her online business and her four children, but her friends encouraged her to find a new partner to help her love again.

Debby had heard many good stories about online dating, so she signed up to an LDS dating site without reservation. A man named Eric Cole contacted her saying he was also a widower with a son named Kenny. He lived in Houston, but his business as a contractor took him to Hong Kong, Malaysia, and India, among other places, so he couldn’t meet her in person. 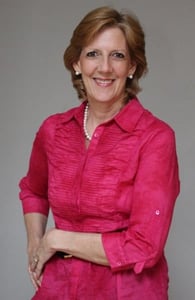 In 2016, Debby wrote “The Woman Behind the Smile” to raise awareness about the dangers of online dating.

Eric suggested they move their conversation to Yahoo Chat, and their online relationship began. Over the next two years, Debby met Eric’s son, his sister, and his attorney through Yahoo Chat. She felt that they knew each other very well and were becoming family, so when Eric said he needed money to pay medical expenses or fund his work overseas, Debby agreed to help.

“It was an extraordinary time of building a relationship,” Debby said. “I copied and pasted every message in over 4,000 pages of a journal that I thought would be family history, but it would’ve been evidence if the FBI could have done anything.”

The man she knew as Eric asked her if she could forgive him for something he had done. He confessed that there was no Eric Cole, the contract work was a lie, and their whole relationship was a scam. Debby was in disbelief and wanted proof, so her online pen pal agreed to do a live video chat, which they had never done before. Debby’s jaw dropped when she saw a young man who looked nothing like he had described.

Debby reported the scam to the FBI, but she was told that nothing could be done unless the scammer set foot on U.S. soil. It took her years to get over the shame of being a romance scam victim. Once she started talking about what had happened to her, she realized she wasn’t alone, and millions of other people had similar stories.

Debby started working with the Society of Citizens Against Relationship Scams in 2016, and she has become one of the organization’s most passionate advocates for victims all over the world. SCARS stands up for people like Debby who put their trust in the wrong person and experience loss, heartbreak, and other trauma as a result.

“My greatest joy is when I can stop someone from getting involved or help someone recover from a scam,” she said. “I understand because I was in it to the end. You’re in it until you’re broke or broken. I wanted people to be aware and beware.”

Dr. Tim McGuinness founded SCARS in 2015 to represent the millions of people who fall victim to romance scams every year. Tim has been a leading technologist since the early 1980s, and he has seen the scam industry explode in that time.

An international network of criminals made over 19 million scam attempts every day in 2018, and each day over 2,000 people fell victim. 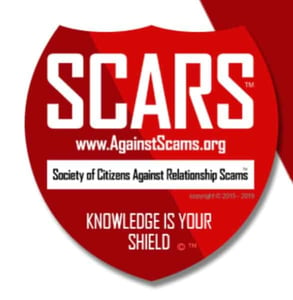 The SCARS team reaches over 1 million people a year through its social media, online videos, and website. Its dedicated support group offers a place of healing for the broken-hearted, and its free scam reporting tool has created a searchable index for gathering and distributing information about cyber-enabled scams.

As a crime prevention group, SCARS works with the U.S. Department of Homeland Security, the Counsel of Europe, the National Center for Victims of Crime, and other related organizations. Former cybercriminal Brett Johnson also works as an advisor for SCARS and has provided insights on the psychological techniques and online loopholes scammers use to take advantage of people.

“We’re the only organization that is solely focused on online scam victims support and assistance on a global scale,” Tim said. “We know the importance of trying to educate people about scams to help them avoid them.”

Tim has been tracking online scam networks for over 20 years now. In 2001, he helped law enforcement agencies arrest an Al-Qaeda cell in Holland. The group was using romance scams and human trafficking to fund its terrorist operations. Tim started studying the scam industry and realized it is much more sophisticated than people know.

“Twenty years ago, people in Ghana were sitting on floors with computers and scamming people was a family operation,” Tim explained. “Now you have office buildings full of scammers with an HR department, professional scripts, and a victim list.” 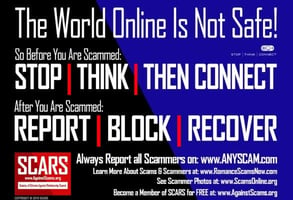 SCARS provides resources to help victims seek justice and recover from a scam.

In 2000, Tim launched Romance & Dating Scams, which became RomanceScamsNow.com in 2003. The site is an educational resource and support system for victims of all types of scams. It’s not just about the Nigerian prince in need of $1,000. An online scam can take many forms, including a person on a dating site asking for tokens, gifts, or a loan of under $50. Scammers often start with small asks to groom a potential victim and see how willing they are to open their wallets.

According to the Federal Trade Commission, over 25,000 Americans filed complaints about a romance scam in 2019 and collectively lost over $200 million.

Of course, money isn’t the only thing online daters have to lose. Some scammers in Eastern Europe, Latin America, and Asia are interested in using an international marriage to gain citizenship in the U.S., the U.K., or another Western country. These international brides (and sometimes grooms) have no intention of staying in the relationship in the long run, and they’ll get divorced as soon as they’ve established themselves in their citizenship. 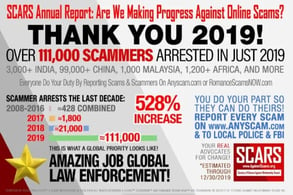 SCARS collects data from law enforcement groups around the globe.

Tim told us that the Chinese government made over 99,000 arrests for cyber-related scams in the last two years, and the Nigerian government also cracked down in terms of cybersecurity. From India to the U.S., many law enforcement agencies have begun addressing the international scam organizations in the online dating scene.

RomanceScamsNOW raises awareness about the prevalence of scams and emphasizes that people of all ages can be prey to these criminals. Young people often think they’re too savvy to be victims of an online scam. But Tim told us that the under-35 demographic is the highest at risk for becoming a money mule or having their photos or messages used for scam purposes.

Scammers weave so many lies and employ manipulation tactics that victims lose sight of reality and find themselves doing things they wouldn’t ordinarily do. It’s a dangerous form of gaslighting that can leave a person confused, heartbroken, ashamed, and traumatized by the end. When that happens, the SCARS team comes in to pick up the pieces and aid in the grieving and recovery process.

“The information at SCARS is incredible,” Debby said. “And the support groups let people know they’re not alone. We can all really understand and empathize because we’ve been there.”

SCARS has pulled back the curtain to reveal how international scam organizations operate and show people how easy it is to fall victim to a lie. From identifying online dating red flags to helping victims rebuild trust, SCARS promotes a healthy dialogue about the nature of online relationships and romance scams.

In Partnership With Online Dating Companies

Tim is a passionate tech consultant who started his career working for a software publishing company in Miami in the 1970s. Twenty years later, he helped establish TigerDirect as one of the largest consumer electronics retailers. His high-profile work in the tech sector led him to be tapped as a consultant when government officials created regulatory laws for the internet.

“I was part of the consortium to get the Communications Decency Act of 1996 passed,” Tim said. “It was intended to preserve the commercial viability of online companies like dating websites, but it has had unforeseen consequences we’re still dealing with today.” 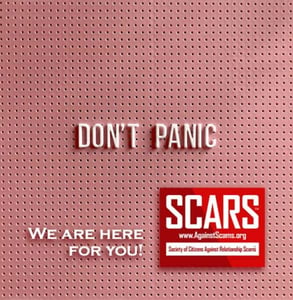 SCARS can help reputable dating companies beef up their security.

Tim said the CDA has made many online companies turn a blind eye to the criminal activities of its members so they can maintain deniability in court. As a result, dating websites and apps can fail to protect users from scammers in the network.

By founding SCARS, Tim aims to work with online dating companies to foster best practices and raise the bar for online policing and anti-scam activity. He has consulted with dating website owners and spoken at online dating conferences on the most effective measures to create a safe online dating environment.

When a dating site or app becomes infiltrated by scammers, it’s a bad situation for everyone and can lead to class-action lawsuits, serious scandals, and even criminal charges. Companies like MySpace and Backpage have seen the consequences of maintaining irresponsible online operations, and some professionals in the dating industry could face the same fate in the coming years.

Whether it’s through machine learning or human policing, SCARS can help develop proactive security strategies and recommend potential solutions to the scam epidemic facing all dating websites and apps.

“We are absolutely willing to work with anybody who comes to our door to help solve these problems,” Tim said. “We throw out the hand of friendships to any commercial dating website that wants to fight scammers and fraud. We will help professionals develop best practices that will keep their audiences safe.”

The SCARS team urges online daters to act with caution and be wary when mingling with strangers on a dating website or dating app. People of all ages, backgrounds, and lifestyles can fall victim to a well-trained and resourceful scammer.

“We are hardwired by our psychology to fall for scams. You cannot outthink a scammer,” Tim said. “The only way people can be safe from scams is by changing their behavior.”

SCARS is on a mission to support romance scam victims and provide public service information to help people learn, heal, report, and join the fight against scams. These experts have worked with law enforcement, government officials, and online dating companies to disrupt the scam economy and make the online world a safer place.

“My greatest wish right now is to get more public service announcements out there, especially to the dating crowd over 50,” Debby said.”We’re looking for friendship, companionship, and love. We’re not lonely or desperate, just alone. We trust. That’s the dater’s situation. And sometimes we need an objective buddy to tell us to slow down.’