The Scoop: The Institute for Family Studies (IFS) delivers science-based insights on how to improve relationships and support children’s welfare over the long run. IFS researchers and writers monitor trends in marriage and families to raise awareness about the many benefits that making a lasting commitment can have on the individual and the larger community. The free educational resource shows people how important marriage is to the family unit by sticking to the facts and advocating for strong family values and enduring marriages.

The U.S. marriage rate — currently at 6.9 per 1,000 population — is at its lowest point in American history. Surveys indicate that millennials are waiting longer to get married than previous generations — and some have no intentions of tying the knot at all.

A 2018 academic study found that as many as one-quarter of millennials are likely to never get married in their lifetime. That can have a dramatic impact on individuals, families, and societies, in general, especially if those never-married singles have children.

The Institute for Family Studies is a nonprofit organization dedicated to strengthening families.

Approximately 36.5% of single mothers live in poverty in the U.S., while only 7.5% of married couples live in poverty, according to academic research conducted by the Institute for Family Studies. Only 69% of children live in two-parent households in the U.S., and 40% of newborns are birthed by unwed mothers.

W. Bradford Wilcox, Senior Fellow at IFS, told us these trends and statistics are a significant cause for concern for the IFS team because a weak family dynamic and unstable relationships can undermine a person’s happiness while inhibiting their child’s general success and welfare.

The Institute for Family Studies highlights scholarly research regarding relationships, marriage, and family to raise awareness about the strategies and mindsets that can lead to better outcomes for the average American family.

Every advice article and research summary endeavors to clarify how an individual’s choice to marry, divorce, cohabitate, or stay single can affect family life and a child’s well-being. People reading through the IFS library can gain a better appreciation for how maintaining a happy marriage can be life-changing in a lot of positive ways.

“On average, marriage is an important institution for adults and for children,” Brad said. “Not everyone should get married, of course, but, in general, families are more likely to be flourishing when they’re grounded in a steady marital relationship.”

How a Lifelong Commitment Can Benefit Adults & Children

The IFS blog offers a lot of informational and inspirational content that encourages people to stand by their commitments and focus on the health and longevity of their family. IFS employs marriage and family experts who can speak with authority about marital quality, divorce, sexual fidelity, parenthood, and other central issues to today’s marriage-oriented singles and couples.

Whether you’re looking for tips on strengthening a relationship or raising well-adjusted children, IFS employs a team of scholars who look into these important questions and draw conclusions based on scientific research. Every day, the IFS blog publishes article after article about how modern families are coping with modern challenges.

Some IFS researchers study divorce trends and cohabitation, while others focus on successful relationship strategies. By summarizing and assessing regional and international reports on family dynamics, IFS can offer some deep insights into how beneficial a strong and stable marriage can be.

One report from California showed that 80% of college-educated adults came from intact families grounded by married parents, while only 60% of college dropouts could say the same. California’s upper-class families were more likely to say they supported non-traditional family dynamics, yet they were more likely to come from traditional family units with parents who were still married.

“We wanted to point out the tension we see in California and across the U.S.,” Brad said. “Upper middle-class individuals may appreciate the value of marriage in their family life, but they’re unable to publicly communicate that as an ethic.”

The IFS blog speaks to people of all races, ethnicities, and socioeconomic backgrounds, offering universal insights for building a strong and healthy family. One of its most enduring messages to singles and couples is how crucial it is to commit to commitment.

“People who embrace marital fidelity and permanence are less likely to divorce and also more likely to be happily married,” Brad explained. “Some couples are not looking for an escape clause in the marriage contract, and having that mentality going into a marriage is more likely to make it strong and lasting.”

IFS articles emphasize that marriage requires great sacrifice, effort, and commitment. Individuals must be willing to compromise and communicate if they want to continually strengthen their relationships, and they have to choose a partner who will meet them halfway.

A serious relationship requires a firm foundation — not just good looks and good times — so marriage-minded daters should endeavor to build a deep friendship that will endure through old age and personal challenges for the long haul.

“Find someone who sees marriage as a commitment for life,” Brad advised. “This may seem obvious, but we’ve seen couples thinking about marriage who are not equally committed or don’t believe in marriage permanence, and they’re the ones who are most likely to have trouble and divorce.”

The Difference Between Cohabitation & Marriage

Cohabitation has become a hot topic in sociology because a growing number of couples are choosing to live together before — or instead of — getting married.

“Some scholars are under the impression that cohabitation is roughly the same as marriage,” Brad said. “But if you actually look at the data, you’ll see that children born to married parents are more likely to be successful in school.” 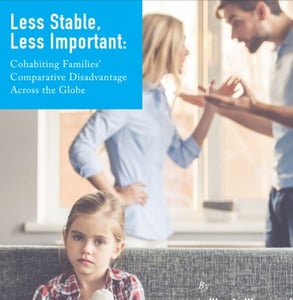 While some European countries may treat cohabitating couples the same as married couples under the law, the choice to live together rather than marry seems to have a negative ripple effect on the family unit. Cohabitation fosters uncertainty and instability because a romantic partner could move out at any time and end the relationship without consequences.

IFS Senior Fellow and research professor Scott Stanley has written extensively about cohabitation and relationship stability. His advice articles focus on using data to explain why couples should consider getting married to strengthen their commitment, reassure their children, and set themselves up for success.

“We’re eager to disseminate to people to help them learn and improve the quality of their relationships,” he said. “We take research findings and make them relatable and understandable to the average person.”

The IFS researchers maintain that adults and children are more likely to flourish in a family, and in a community, where stable marriage is the norm, but they don’t try to sugarcoat how easy it is to maintain a good and happy marriage.

“We want to temper people’s expectations for marriage,” Brad told us. “It’s not just about personal happiness and fulfillment. It’s about forging a family life with your spouse and being part of a larger community. The quality of the marriage does matter too, and we aim to give people information that will help them become better spouses and better parents.”

The IFS team includes people from multiple disciplines and with multiple points of view, but they all care about the health and welfare of families. This team of scholars dives into academic research on a daily basis to learn, reflect, and draw reasonable conclusions.

Through its blog posts and research summaries, the IFS team disseminates interesting tidbits about marriage and family to the public at large.

IFS fellows like Scott Stanley have the freedom to pursue their passions and write on topics that interest them. Many IFS writers have also written self-help books about marriage and relationships. Their collective work contributes to a growing knowledge base on what it takes for families and children to thrive in modern society.

“Commitment is making a choice to give up all other choices.” — Scott Stanley, IFS Senior Fellow and Research Professor

The IFS website is a free educational resource for anyone who wants to strengthen their personal relationships and family ties. The team offers marriage advice as well as divorce counseling for couples struggling to connect. You can also find instructive webinars full of parenting tips, economic insights, and other advice tailored to young people.

Looking to the future, IFS has plans to expand its educational efforts and reach a broader audience by partnering with schools, universities, colleges, and civic organizations.

The IFS blog currently sees over 200,000 monthly visitors, and it’s rapidly growing to meet the needs of modern singles, couples, and families.

“It’s about education as well as intervention,” Scott told us. “We are experts in the field of how couples can learn how to strengthen their relationships and lower their risk of divorce.”

The Institute for Family Studies seeks to advance the well-being of adults and children by conducting research into marriage and family trends and statistics. Its facts-driven efforts have revealed how the declining state of marriage in American society can negatively impact families throughout the country.

The IFS website highlights research that underscores the importance of a stable marriage when it comes to children’s welfare, economic interests, and personal fulfillment.

“We want scholars and journalists to understand how much strong family values matter for kids and communities,” Brad told us. “We’re also trying to give the broader public a sense of the importance of strong families.”