Delete Facebook: How an Online Movement Can Save Singles From Exchanging Their Personal Data for a Prospective Date

The Scoop: For the last 10 years, DeleteFacebook.com has showed people how to remove themselves from the toxic web of social media and reclaim ownership of their digital identities. Now, with the U.S. release of Facebook Dating on the horizon, the issue of online privacy is more relevant than ever in the dating industry. According to DeleteFacebook creator Edward Cant, singles should weigh their options carefully when deciding to create a dating profile with Facebook and trade their personal data in hopes of finding a match.

On the stage of the F8 developer conference, Mark sold this product as a humanitarian effort to save singles from loneliness and create lasting romantic connections based on decades of research on the likes and dislikes of the 2.7 billion people on Facebook, Instagram, WhatsApp, and its other social applications.

“If we’re focused on helping people build meaningful relationships, then this is, perhaps, the most meaningful of all,” Mark said. “I want to be clear that we’ve designed this with privacy and safety in mind from the beginning.” 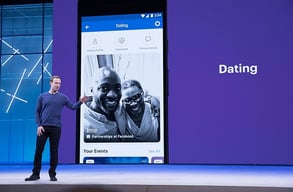 Mark Zuckerberg promises privacy while announcing the release of a data-grabbing dating feature.

Facebook Dating will give singles the opportunity to use the global Facebook network as their dating ground. The Facebook Dating service, which lives within the Facebook app, has already launched in several South American countries, with plans to go live in the U.S. and Canada by the end of 2019.

Edward Cant, the developer who created DeleteFacebook.com, has voiced concerns over how much sensitive information will be shared with a tech company that’s famous for mishandling user data.

“Facebook Dating is not the whimsical dip of the toe into online dating that it may appear to be,” Edward said. “It’s almost their selling point — that they know so much about you, so they should be able to match you with suitable partners for whom they also keep a huge amount of data.”

Edward recommends that online daters exercise caution before handing their hearts over to Facebook Dating and, potentially, making themselves vulnerable to online exploitation.

A Social Media Rebellion Builds in the Wake of Scandals

The Delete Facebook movement began trending around 2018 when a wave of users decided to take control of their data and take a stand against manipulative and unethical data-sharing practices.

Edward has been speaking out about this issue for over a decade now. He launched the first version of DeleteFacebook.com about 10 years ago, and he has been building its informational resources ever since.

“It had one simple objective: help people who are frustrated with Facebook find the buried account deletion form,” Edward said. “It’s still tricky to find and tricky to follow.”

Over the years, Edward expanded his step-by-step guides to include other privacy-related content. On the sidebar, Edward features news stories about Facebook’s privacy breaches, data missteps, and shady dealings. DeleteFacebook.com is a humble site run by one man, yet it has become a substantial thorn in the side of this tech giant.

Edward said DeleteFacebook.com’s minimalist and tell-it-like-it-is style is reflective of its straightforward mission. He prefers to let facts speak for themselves and provide a resource to Facebook users seeking an escape from the endless newsfeed and stories.

“Delete Facebook is built mainly on stubbornness and empathy,” Edward said. “Facebook is not subtle about their disregard for customer privacy, and I was lucky enough to be in a position to provide rebellious pushback. It worked out better than expected, and I like to think I’ve helped a few people, perhaps a few million!”

DeleteFacebook is an online privacy advocate that has gained traction simply by encouraging folks to reconsider their membership and ask themselves if social media is worth it. Recently, DeleteFacebook accepted the sponsorship from DuckDuckGo, a private search engine that rejects ad targeting and doesn’t collect personal data on users.

Facebook has fingers in many pies. The company owns Instagram, Whatsapp, Oculus, Messenger, and other online services. Its widgets track consumers as they chat, like, post, and comment, and now it’ll add sexual orientations and dating preferences to its ever-growing pool of sensitive information.

“Your data is very valuable to Facebook so they employ every possible pattern that they can get away with to keep it,” Edward said. “The simple way out is deletion.”

Singles can cut ties with Facebook for good by deleting their accounts.

DeleteFacebook urges users to quit the social media network and delete their information from its database. Deleting Facebook is not the same as deactivating a Facebook account. When you deactivate your account, your profile data is retained in case you want to come back one day — it’s like saving an empty drawer for your ex on the off chance you get back together. Deleting your account is like burning everything your ex owned and removing any possibility of reconciliation.

Once you delete Facebook, you cannot recover any of your profile data — it’s gone and out of Mark Zuckerberg’s hands.

While deletion may seem extreme, Edward and other privacy-conscious individuals recommend it as the only way to ensure personal data doesn’t fall into the wrong hands. People can take control of their digital identities by removing themselves from Facebook.

Facebook hasn’t exactly had a stellar track record when it comes to privacy. It made headlines for sharing the data from 50 million Facebook profiles to Cambridge Analytica, a politically motivated conservative organization. The scandal earned the company a $5 billion fine and a lot of negative media attention.

Yet the company has doubled down on its data-collecting, profit-driven ways by launching Facebook Dating. This feature will ask users many personal questions — like “What does your perfect day look like?” — under the guise of determining compatibility. It may lead singles to a happily-ever-after ending, but that data will remain on the site long after they’ve ridden into the sunset.

“Facebook is extremely profitable because it leverages your data to make money,” Edward said. “This means tracking you at every possible opportunity and sharing data with its partners. Once shared, there is nothing you can do about it.”

DeleteFacebook.com does exactly what it’s URL promises — it teaches users how to delete their Facebook accounts and remove all traces of themselves from the web. Edward has even composed a goodbye message to share with Facebook friends. 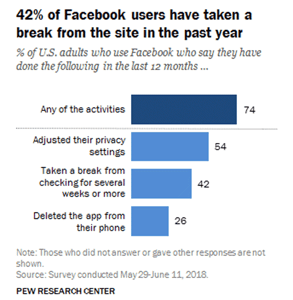 Some people have been on Facebook for decades and 74% of American Facebookers visit the site on a daily basis, so total deletion of an account can seem scary at first glance. It’s natural to have concerns about losing years of memories or to worry that you can’t quit the social network cold turkey. Fortunately, DeleteFacebook.com can offer a deletion schedule and tips to make the process more palatable to the average user.

In addition to its instructional guides and videos, DeleteFacebook.com also encourages people to stay in the know when it comes to privacy and the most prolific social media platform in history.

Edward pulls news stories hot from the presses and highlights stories he thinks people should know about. “I try and keep the copy as objective as possible, saving the opinions for interviews,” Edward said. “I keep an eye on the news and update the linked news articles as appropriate.”

DeleteFacebook.com arms people with information so they can make an informed decision about where they want their personal data to go.

The online world may tempt users with an abundance of free services and social platforms. But, as my economics teacher was fond of saying, “There’s no such thing as a free lunch.”

Oftentimes, if you’re not paying for a social media site’s services, that’s because you are the product. That doesn’t just mean you’ll see a few harmless ads. Tech companies like Facebook generate revenue by collecting, processing, selling, and sharing personal data on users, and, as people learned to their peril in the Cambridge Analytica scandal, that can have a huge impact on the online experience and real-world events.

“Your data is extremely valuable to tech companies,” Edward said. “You are welcome to use their services, but it is important to realize that they are not free.”

Be Careful Where You Entrust Your Heart

Not all tech companies have your best interest in mind when putting together a business and marketing strategy. Sure, it’s possible Facebook is truly earnest about bringing more love into the world, but it’s also just as likely that the team heard that the dating industry is going to be worth $12 billion in 2020, and they wanted a slice of that pie.

Online daters may find Facebook Dating marvelously effective at understanding their wants and needs, but users should be aware of the hidden costs of sharing their dating preferences with Facebook.

While Edward acknowledges that Facebook could be a decent matchmaker — after all, it knows everything about us, right? — he warns online daters to think twice before handing their data over to such a massive and unregulated tech company.

“While Facebook has huge potential to change the world for good, it also has the potential for nefarious characters to gain increasing amounts of control,” Edward said. “When framed in this context, dating data is potentially extremely sensitive, and therefore worth asking yourself whether it’s a good idea to use the service.”