The Scoop: The Zyl app has created an engaging social network dedicated to creating, saving, and sharing memories. Friends, family members, and couples collaborate on stories in the app, and they can view past photo collections to relive special moments together. Every day, Zyl highlights blast-from-the-past pictures and videos taken years ago and makes it easy for couples to share many heartwarming memories through the app.

I’d estimate that in the last year I’ve taken something like 500 pictures with my smartphone. I take photos as if I’m collecting evidence for a biographer whose main concern is documenting what I had for lunch and how cute my dog continues to be.

I like to imagine that one day I’ll summon the energy to scrapbook with as much enthusiasm as my mom does. However, so far, most of my photos remain safely tucked in the cloud with no audience to speak of.

If you’re like me and tend to hoard photos instead of sharing them, then a photo-sharing app like Zyl could be a good solution to help you get the most out of each snapshot and selfie.

Zyl is a free app created to connect individuals with one another through community photos and albums. The platform has established a thriving social network and shared gallery where old photos can come to light to remind users about the good times they’ve shared. 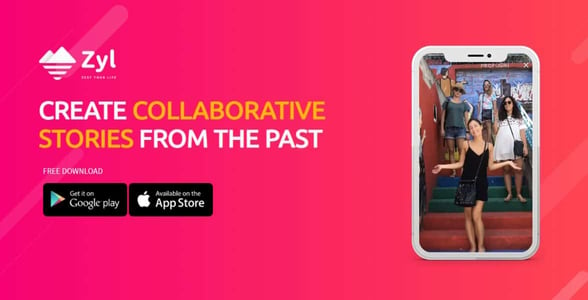 Zyl Co-Founders Mathieu Spiry and Aurélien Sibiril are childhood friends, so they understand the power of shared memories in personal relationships. When you have a shared history, you have something forever in common, and that can be a strong foundation to create new memories.

Couples who want to grow closer together can connect on Zyl and review photos that remind them just how far they’ve come through the years.

Zyl is free to download on Google Play and the App Store. Since its launch, the app has seen over 50,000 downloads on Android and over 200,000 downloads on iOS. The Zyl startup has currently raised over 2 million euros, and it continues to grow to meet the needs of the digital age.

Introducing The Story: A New Feature to Connect People

The first version of Zyl launched in 2016, and it quickly gained traction among movers and shakers in the tech industry. The startup company, which now employs eight people, has filed for three patents in the U.S. with plans for continued innovation and invention in the future.

The newest Zyl feature making headlines is The Story, which fosters daily collaboration and storytelling among friends, family members, and significant others on the app. 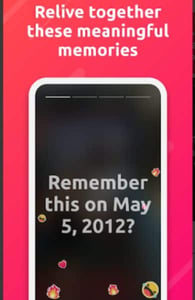 “From now on, memories are shown through stories that can be completed by friends and family,” the Zyl team told us. “This new feature allows our users to relive even deeper their memories as they can now discover photos from their friends too.”

Today’s Zyl users can explore past moments from different perspectives by looking through the galleries of their loved ones, and it’s a great way to spark heartfelt conversations and nostalgia.

While they reminisce in their shared albums, couples could discover photos of each other that they haven’t seen before — or haven’t seen in years — and they can relive those special moments from their dating history or married life.

Zyl prompts users to look back at yesteryear by featuring pictures from last week, last month, last year, or even further back. Every day, the app creates a unique Story made from the collective memories of users. The app uses artificial intelligence to create visual time capsules that make people smile and laugh.

“This is the perfect opportunity for a daily instant of rediscovery, discussion, and emotions,” the Zyl team said. “By offering only one unique memory per day, Zyl adopts a slow-paced tech approach.”

Couples & Their Loved Ones Bond Over Shared Experiences

The Zyl community encompasses men and women all around the world — in 75 countries to be specific — and its users range in age from early 20s to late 60s. The app is useful for anyone with a strong sense of nostalgia and even stronger social connections. You don’t have to be very tech-savvy to get the hang of how the app works.

As a free Zyl member, it’s easy to upload photos, browse shared albums, and look back on a timeline of memories from people in your network. 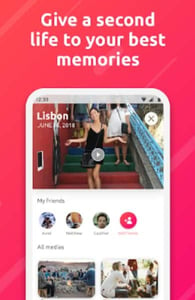 Zyl helps couples rediscover photos and videos from past years.

“I prefer this app over any other I’ve tried,” said Arif K. in a review. “I love all the neat albums, videos, and coloring it does with the pictures. Truly a wonderful photo app that shows your memories to make you smile.”

“I can’t say enough about this app,” Tanya wrote in her review. “It saves and backs up what I thought were lost photos and creates video clips of memories. This app means so much to me.”

Zyl has continuously improved its photo-sharing service by taking user feedback seriously. The team assesses user engagement and satisfaction to determine in which direction to take the app, and it welcomes suggestions from its fast-growing online community.

The Zyl team prides itself on maintaining a top-rated photo-sharing app that is intuitive, secure, and streamlined. For instance, the signup process reduces friction from the get-go. Users don’t have to create an account with an email or a password, and they can keep their photos private or share them with a close circle of friends on the app with a single click.

“I have used this app for years and trust no other developers,” said a satisfied Zyl user named Pradip. “Peace of mind knowing photos are automatically backed up is priceless.”

Zyl stands out for the way it uses memories to create connections between users. The app doesn’t just focus on what’s going on now — it reflects back on times past and gives users a daily reminder to stop and reflect on their life history.

“Users aren’t connected together based on a profile but through the photos they have in common,” the Zyl team said.

Zyl is a small startup with big ambitions. The co-founders have spent the last 10 years innovating in the tech space, and they intend to continue building on Zyl’s momentum as the first social network for photo memory sharing. By the end of the year, the Zyl team hopes to have over 5 million users in its fast-growing community.

Thanks to the Zyl Story, couples have a reason to come together once a day and look back on special memories. Photos no longer have to go unseen and neglected in a private gallery — the shared space on Zyl brings them to the forefront and makes it easy to unearth those cherished moments with the people who matter most.

“Beyond their emotional power, photos have the ability to reconnect us to ourselves and to our loved ones,” said Zyl Co-Founder and CEO Mathieu Spiry. “Zyl’s ambition is to revolutionize the mobile photo experience by creating deep and true social interactions with the aim of creating daily moments of surprise and happiness for its users.”