The Scoop: While people may prefer not to think about it, the simple fact is that we will all die one day. Some believe that contemplating death is morbid, but even spiritual leaders have found that those thoughts can encourage mindfulness and clarity. That’s the idea behind WeCroak. The app reminds users of their mortality five times each day, which can help them let go of life’s smaller problems. As a result, WeCroak can make it easier for individuals, couples, and families to live in the moment and appreciate loved ones and the beautiful world around them.

Bhutan is a small country in the Himalayas that’s considered the happiest place in the world. It’s famous for the concept known as Gross National Happiness, which prioritizes its residents’ general well-being — over economic success or any other measure. In 1972, the King of Bhutan declared that the country’s collective happiness was more important than its gross national product.

Since the early 1970s, the government has used nine different metrics to determine how happy its population is. From psychological well-being and education to community vitality, officials take a keen interest in keeping the happiness quotient high.

So what is a Bhutanese trick for staying happy? Interestingly, it isn’t simply focusing on pleasant thoughts, buying flowers, or even prioritizing family. It’s a little different than that. 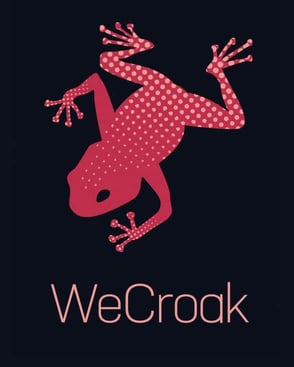 WeCroak encourages people to think about their own mortality and appreciate their lives and partners.

The Bhutanese believe that to be happy, you should think about death five times a day.

The concept may have formed because parts of the small land-locked country can be treacherous, with winding mountain roads, dangerous wild animals, and often inhospitably cold conditions. But it likely stems from the Buddhist beliefs that create the foundation of the country. Buddhists believe in reincarnation, the concept that a dead person’s spirit returns to life in another body offering another chance at enlightenment.

That was the inspiration behind WeCroak, an app that sends five reminders to users every day that they are going to die. The app is designed to help individuals, couples, and families live in the moment, cherish what they have, and let go of life’s minor troubles.

When people remember their life is not guaranteed, they’re more likely to make the most of their time on Earth and appreciate what they have.

“So often, we get caught up in the daily stresses of life, when we’re angry at the ups and downs of a job or the little things that seem to matter so much,” said Hansa Bergwall, WeCroak Co-Founder. “When we remember we’re going to die one day — but we don’t know when — suddenly all those things get put back into proper perspective. And we do a better job of living our values.”

A Mindfulness Tool That Brings Partners Closer Together

Hansa said the idea for the app began forming when he and his business partner, Ian Thomas, decided to try the Bhutanese practice for themselves. Ian, an app developer who created one of the first 3,000 iPad apps, designed the product, while Hansa focused on marketing and messaging. Before long, their app had more than 100,000 downloads.

It’s an ideal mindfulness tool for couples and individuals alike.

“The idea is, with practice and reminders, we can get the most from the precious time we have together, even if things don’t go according to plan,” Hansa said. “There will be hard times, but we can still accept what is happening and try to enjoy each other’s company.”

In one instance, Hansa, who has been married for eight years, was bickering with his husband. He said he was stressed out about work and annoyed at practically everything. They were in a heated exchange, with Hansa venting about what upset him. Then he received a notification.

“It said, ‘Don’t forget you’re going to die. Open for a quote.’ Then I said, ‘And, on top of that, I’m going to die!’” he said. “And we both started laughing. We were in a better place because we could see things at a greater height. That helped us put our disagreement to bed.”

With couples, time spent together may be full of the ebbs and flows of everyday life. Errands, chores, and work can easily distract you from what’s most important. What you’ll remember when you die likely won’t be who did or didn’t fold the laundry.

WeCroak users range in age from their 20s to their 90s, but the majority of those who receive notifications are millennial men. That gives the app a slightly different demographic than other mindfulness apps. Hansa attributes that to the fact that it’s a simple platform with a straightforward message.

“It aligns with Stoicism, which is popular with that group,” he said. “It’s a more effective mindfulness tool than just breathing deeply or doing body scans, but it gets you to the same place. We’re putting things in the right proportion and getting you to relax. It’s great to serve an underserved community.”

Users can download WeCroak on iOS or Android and easily turn on notifications. Then, at five random times throughout each day, they receive a message that reminds them about their mortality. It also allows them to open up the app and read a quote that applies to their life.

WeCroak is available on iOS and Android and sends users five notifications each day.

Quotes may be from philosophers, poets, authors, singers, or even drag queens, Hansa said.

App users can access premium tiers, including WeCroak Leap, for even more content. The premium version includes more quotes and challenges to help users put their awareness of impermanence into action, and features designed to improve the way they handle stress.

There are no ads in the app, Hansa added.

“We want to give people the most positive benefit for their lives in the shortest amount of time, not one more distracting thing on the phone,” he said. “We remind people of their vulnerability, and that can help in many aspects of their lives. There’s no love without vulnerability, so it can help people love each other better.”

Although WeCroak wasn’t specifically designed to help relationships, the founders have received plenty of feedback that proves it has. Romantic partnerships can improve when people remember to appreciate the short time that people are in their lives. When they realize that, suddenly, there may be fewer things to fight about.

For example, Hansa received a note from a woman whose mother had dementia. It was a challenging time, but the five notifications helped her remember what was really important.

“These reminders bring me back into the immediacy of right now. They make me feel gratitude for the moment,” the woman wrote. “Thank you for creating something that helps me appreciate my life and everything in it.”

Hansa said that quick reminders of the preciousness of life could make it more likely that couples go out on a special date, open that nice bottle of wine, or enjoy each other’s company more.

WeCroak is actively adding new tools to the app to get the word out about the practice.

“The tenor of how you treat each other will be a huge portion of the time you have on Earth,” he said. “Give yourself the time and tools, whether it’s this app or partner counseling or meditation, and be your best.”