The Scoop: Today, younger singles and those across the gender spectrum use makeup to express themselves and feel comfortable in their own skin. More than half of Generation Z members don’t identify as cisgender or straight, which is why We Are Fluide makeup caters to those individuals. The brand is designed for everyone with its fun pops of color, gloss, and glitter. We Are Fluide only uses models who are LGBTQ+ and offers products to make everyone look and feel great before a date.

Today, many people see gender as a dynamic, fluid spectrum. No longer is it socially acceptable to presume that someone is simply a man or a woman just because of how they look. In fact, it’s rude to make such a binary judgment.

Laura Kraber realized that as she was raising her teenagers in New York City. While she was working for a startup in the health and wellness industry, she watched the younger generation change the way people think about gender and sexuality.

“I was privileged to witness the gender fluidity movement toward breaking down the masculine and feminine and seeing it as more of a spectrum instead of the rigid boxes that don’t serve anyone,” Laura said. “I was so impressed with so many young people who are working toward a more open understanding of gender. They are putting their own lives on the line to live their truths and be true to themselves.” 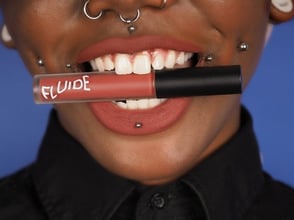 We Are Fluide produces high-quality makeup products for anyone who enjoys wearing it.

She also realized that makeup was an important and popular part of that journey. That’s why Laura decided to launch We Are Fluide, a makeup brand for people of any gender who use gloss, glitter, and fun pops of color to express themselves.

Today, people use makeup as a tool for self-expression rather than something they put on to impress others.

These days, it’s members of Generation Z who have joined the ranks of singles getting ready for dates with makeup. However, most makeup brands market their products directly to traditional segments, including young cis women.

We Are Fluide caters to those across the gender spectrum and goes a step further by only using LGBTQ+ models in its advertisements.

One study shows that less than half of Gen Z identifies as straight. Yet, there wasn’t an edgy, cool beauty brand that spoke to the needs of those young adults who wanted to use makeup and fashion to express themselves.

Laura had some experience in ecommerce and digital marketing, but she brought in a team of people who were part of this emerging majority. One of her first team members was Dev Seldon, an actor, model, influencer, and creative director who produced the company’s logo, the website’s look, and the out-of-the-box aesthetic of the brand.

Next, she met and teamed up with people in New York to find a style and product line that spoke to them.

“For us, we’re all about showcasing and celebrating all kinds of people with all types of gender expressions and identities,” she said. “Through the simple act of representing people across the spectrum of genders, we can create a sense of community.”

We Are Fluide celebrates people across the spectrum of gender identity.

The objective of using only LGBTQ+ models is to show current and future customers that there are people who look and think as they do. If all people see are cisgender models, and they live in a town that’s not as welcoming to those who chose to live outside binary gender labels, their self-esteem may suffer.

Makeup is also different from more permanent methods of outwardly expressing to the world who you are. Surgery, tattoos, or other procedures are much more serious decisions than wearing gloss on your cheekbones for a date.

“It offers a lot of freedom and opportunities for people to feel the transformative act of self-expression,” Laura said.

We Are Fluide products have been available online since 2018 and ship throughout the United States and Canada. In 2020, the brand expanded into retail stores, including Urban Outfitters and Nordstrom. And the brand hopes to be in even more stores by the end of the year.

Its products work for all skin tones and all gender identities, Laura said.

Some of the most popular products are in its Universal line and includes a Universal crayon that works on your lips, eyelids, and cheeks. The Universal liner has glitter but is also safe for lips and can work to give cheekbones a little extra shine.

“That’s a big part of the philosophy; having fun, easy products that you can’t go wrong with. We’re versatile and multipurpose,” Laura said.

The products are also free of parabens and phthalates, which have the potential to disrupt hormones. We Are Fluide nail polish is also free from the seven common toxic ingredients often in polish. They even sell a glitter that is biodegradable and made from wood pulp.

These are high-quality products designed for singles and couples of all types, and the price point is accessible, too.

We Are Fluide offers a video series called Make Up The Rules on YouTube. People watch the episodes to get inspired through tutorials and see other confident people who look like them and are comfortable in their own skin. For those struggling to feel accepted, seeing smiles on the site can be just as fun as trying a new look.

“We’re trying to add some levity and joy with the idea that makeup can be for you and help you in your journey to help you look and feel your best,” Laura told us.

We Are Fluide: Helping All Singles Feel Beautiful

Laura said the team at Fluide recognizes that people often have baggage and that makeup is complicated in the same way that identity and self-expression are complicated.

“Whether you’re a trans teenager or non-binary or a cisgender, straight person, the way we move through the world in terms of our identity and self-esteem, it’s not easy for a lot of people,” she told us.

The team receives plenty of emails and messages on social media from customers and their parents, saying that the brand helps them feel seen. The positive feedback makes all the hard work of starting up a beauty brand in a highly competitive market worth it, Laura said.

In one testimonial video, for example, Zenobia talks about growing up feeling like they weren’t allowed to use makeup, but that changed when they started dressing in drag.

“As someone who is pretty consistently read as trans every day, it’s a fight,” Zenobia said. “For so many people, you are the first trans person that some of them see. It’s a lot of energy to carry, so finding ways to care for yourself has been really instrumental.”

Another customer named Keith said they used to hide who they were when younger, but they started using makeup to show how they were feeling. They liked how it was possible to change their look with makeup every day because we all feel different every day — and often every hour.

“I think self-expression is something that is important for everybody,” Keith said. “It isn’t trivial or superficial. I think it’s just a way of communicating.”