The Scoop: Traveling abroad can be stressful, especially if you don’t know the language, but modern technology can bridge that gap and open people up to a world of opportunity. Waygo offers real-time translation tools that turn unfamiliar Chinese, Japanese, or Korean characters into plain English. The app can take the guesswork out of ordering food, reading street signs, and exploring foreign cities in Asia. Couples need not stress out about their foreign travels with Waygo by their side.

In 2014, Helen and Alan quit their jobs, packed up their lives, and went on a whirlwind eight-month trip from London to Vietnam. The British couple was in their 30s at the time and wanted to take those months to see the world and figure out what they wanted to do in this new chapter of their lives.

They went from hanging out with friends in Berlin to hiking mountains in Russia, and then they began exploring Asia in the final leg of their journey. Helen and Alan wanted to live like locals abroad, but they ran into some snags as they struggled to understand street signs and restaurant menus that had no English translations. 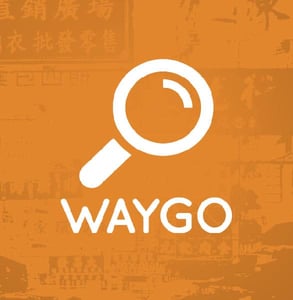 During their travels through China, Helen and Alan decided to download Waygo, a fast-working translation app, to make the journey a little easier.

“The app has a huge advantage over Google translate due to its speed of translation and ability to work offline from the camera,” Helen and Alan wrote in a blog post. “This makes it simple to scan a menu to find what you want to eat.”

Since its launch, Waygo has been a wingman to many individuals, couples, and families traveling abroad. The app translates Chinese, Japanese, and Korean words into English instantaneously. Its simple translations help travelers get their bearings and have a good experience in Asian countries where they don’t speak the language.

Waygo CEO and Co-Founder Ryan Rogowski said the app has been positively received by many jet-setters who want to overcome language barriers and experience different cultures.

“It’s super cool,” he told us. “Couples can have a good travel experience where they’re not afraid of getting lost or getting poisoning because they can read everything quickly and easily.”

A Simple Idea to Make Sightseeing in Asia Easier

Ryan was living in China for work when he got the idea for Waygo. He wanted to learn about the local culture and expand his horizons, but he found himself continually flummoxed by Chinese menus that had no pictures and no English translations. He was forced to use trial and error to find a couple dishes he liked, and every new restaurant presented a new challenge to understand what exactly he’d get on his plate.

“It really limited by ability to explore the country and its cuisine,” he said. “That was one of the biggest frustrations for me.” 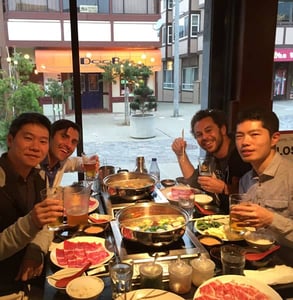 The team created Waygo to help foreigners make the most of their trips.

Fortunately, Ryan is a problem solver and tech enthusiast, so he decided to develop a tool that would make his life abroad much easier.

He wanted to use the camera feature on a smartphone to translate Chinese characters into English with the click of a button. Ryan quickly teamed up with fellow developers Kevin Clark and Huan-Yu Wu, and they got to work building an app they called Waygo.

The name Waygo came from wài guó, which means foreigner in Chinese. Waygo officially launched in 2013 and was hailed by Tech in Asia as an essential app for China travelers on a budget.

Although Ryan understands much more Chinese than he did when he first arrived in Beijing, he says he still uses Waygo to help him read text that is unfamiliar to him.

Now Couples Can Explore the World on Their Terms

Waygo users use their smartphone cameras to capture the Chinese, Japanese, or Korean characters they don’t understand, and the application will automatically translate the words into English. This straightforward tool can help couples figure out where to go, what to do, and, most importantly, what to eat during their trips in Asia.

You can download Waygo for free on Google Play or iTunes. The app offers a free trial period, so newcomers can see how it works and decide if it’s right for their needs. After the trial period, users must pay to use the translation tools. 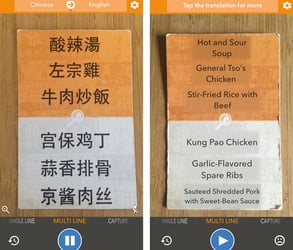 All you have to do is take a picture of the text you want translated.

Ryan told us that about 80% of Waygo users are traveling to Asia for leisure, while 20% are traveling for business. The app has been used for everything from date nights to business meetings at restaurants around the world.

The Waygo team has received positive feedback from users from all walks of life. Some people used it to keep from getting lost in Beijing, while others found interesting local foods in Seoul.

One couple said they felt more comfortable traveling to small towns in Taiwan because they knew Waygo had their backs.

“I spent five weeks in China, and this was life-changing,” said artsiecook in a review. “I was able to read menus, which was the most fun and entertaining. I read menus like novels, so it was incredible!”

Michael Sorensen said Waygo helped him stay on track during his frequent visits to China. “This has been super helpful, especially for trains where you rarely find English,” he said. “Thanks, Waygo.”

Ryan told us he actually ran into a couple using the app on the subway in Taipei. They were pointing their phone at a sign, and Ryan recognized the interface as his own brainchild. He went up to the couple to introduce himself and got a thrill from seeing the real-life impact of his work.

“It’s so rewarding for me,” he said. “It’s great to know that this is actually helping people really enjoy their trip in a way they wouldn’t have been able to do without it.”

A New Feature Allows You to See Pictures of Foreign Foods

Waygo’s founding mission is to make Chinese, Japanese, and Korean menus easier for English-speaking travelers to understand, and that continues to be a top priority for the app’s team.

Recently, Waygo added a new feature that will show users images of foods as well as English translations. You simply capture the menu, read the translations, and click the More Details button to see a list of pictures of similar dishes. This can be an incredibly helpful tool for travelers with dietary restrictions or particular tastes. 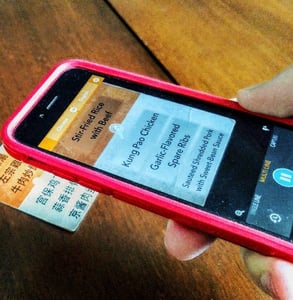 Trips to Asia can be much more doable and enjoyable thanks to Waygo.

Now travelers no longer have to play a guessing game just to order dinner. They can use Waygo to explore foreign cuisine and choose items from the menu with confidence.

In the coming years, the team intends to build more features to make the translation experience even more seamless and user-friendly for everyone. The goal is to help travelers have the best possible experience abroad, and that starts by helping them understand where they are and what they’re doing.

“We’re always looking for feedback from customers on things they feel would help,” Ryan said. “Major projects in the works right now would be achieving greater accuracy and adding new languages.”

Ryan said he’s currently interested in developing translation tools for Eastern European languages because its words and phrases can be extremely difficult for English speakers.

“That’s another alphabet, so you can’t just read it and figure it out,” he told us. “You can’t look it up by typing it in Google or a dictionary because you can’t even imagine how to type the character.”

Helen and Alan had an enriching experience backpacking through Europe and Asia, and the journey was all the more enjoyable because of Waygo’s translation app.

A language barrier can limit English-speaking people who want to see the world, but Waygo sets them free to explore the area and learn about the culture. Waygo can give its users a way to appreciate and navigate Asian cities on their own. Foreign restaurants and street signs aren’t as daunting with this knowledgeable translator in your pocket.

Waygo is a handy tool for travelers exploring big cities and small villages throughout Asia. Whether you’re visiting a museum or dining at a restaurant, the real-time translation tool can help you connect with your surroundings, understand the local culture, and enjoy a stress-free trip.