The Scoop: Active women often have to find time in their busy lives to reapply makeup after working out or running around. That’s why a group of five athletic women decided to launch Sweat Cosmetics, a line of makeup products that can stand up to perspiration. The company designs cosmetics, many of which contain sunscreen, that can last an entire day — even during and after a workout. These all-natural products are lightweight and practical for everything from a yoga class to an active date.

When active women get asked out on dates that include a game of tennis or a mountain hike, they still want to look good and feel confident. But they may resign themselves to the fact that their makeup will dissolve, and they may need sunscreen to protect them from harmful rays.

Until the past few years, those women often had to make a tough decision. They either went without makeup while participating in an activity or accepted that they may look like a mess by the time they were finished. The five founders behind Sweat Cosmetics, a line of sweat-proof makeup and sunscreen products, understood that dilemma well. They were all college or professional athletes who loved their time on the soccer field — but also loved to look good.

“We used to get asked why we would wear makeup to our games,” said Taryn Hemmings, a Co-Founder of Sweat Cosmetics. “It was crazy that being athletic was a barrier to being feminine, but that’s been broken down.”

The idea for the Sweat Cosmetics brand originated while the founders were in college and couldn’t find makeup they could wear for an entire soccer game and then out at night.

Some of them also saw other players on their professional teams having their pictures taken right after a game because of endorsement deals. In the locker room, they’d hear those fellow teammates complaining about how their makeup or sunscreen would make them break out.

So the five friends developed Sweat Cosmetics to provide those active women with lightweight products that protect their skin and help them look good during, and after, their favorite activities.

Founded by Five Athletic Friends Who Work Well Together

When Taryn and Co-Founders Emily Hines, Courtney Jones, Leslie Osborne, and Lindsay Tarpley came together to start the company, they each had had impressive athletic careers. Lindsay is a two-time Olympic gold medalist with 125 international appearances for the U.S. Women’s National Soccer Team. Leslie was also a member of the U.S. Women’s National Soccer Team and currently works as a soccer commentator and analyst for Fox Sports.

Courtney was a former professional soccer player for the Boston Breakers and the Kansas City Blues, while Taryn played professionally with the Boston Breakers, Chicago Red Stars, and other teams abroad. Emily played Division I college soccer at the University of Denver, where she befriended Taryn and helped brainstorm the initial concept behind the brand. 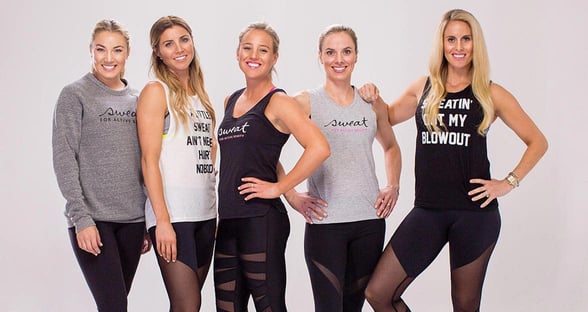 The founders of Sweat Cosmetics are all athletes who saw a need for their new makeup products.

“We were all teammates. That was a huge part of why we work so well together and why we could do this in the first place,” Taryn said. “We’re all super competitive and don’t give up on anything.”

The team behind the brand is still quite small, primarily consisting of the five women. Taryn said that she and Emily are based out of Denver and talk “50 times a day.” Courtney lives in Dallas while Leslie and Lindsay are based in Boston. They have contracts with a few production and distribution partners, but the co-founders do most of the legwork on growing the business.

“We started out reaching out to athletes and women who are super active, but now it’s for all active women,” she said. “People on the go, at work, running from one thing to the next, and moms — that’s who our products are built for.”

The most popular Sweat Cosmetics offering is its foundation, which is an all-natural mineral powder that includes an SPF 30 sunscreen. It comes in four universal shades, which are easy to match to a skin type. Users can send a picture of themselves to a customer service rep, and an expert can help them pick the right shade. That also makes it easy for those looking for thoughtful gifts for active women in their lives.

“It’s easy to wear. Whatever you’re doing, it’s an all-around makeup. You’ll feel comfortable and confident, and your skin will thank you, for sure,” Taryn said.

The mineral powder can be applied with a twist brush, making it quick to put on, and users don’t have to worry about liquid spilling in their workout bags. Sweat Cosmetics also offers a translucent powder, basically a sunscreen, that can be used as a finishing powder. The translucent powder makes a great gift because it matches any shade or skin type.

Another in-demand Sweat Cosmetics product is the Illuminator and Bronzer package, which are both water- and sweat-resistant. They also come in one unique box, making them a sought after gift.

On-the-go women also appreciate the company’s cleansing towelettes, which are individually packaged, fragrance-free, and come in packs of 10 or 30.

“These are for women trying to wash their face after a quick workout, or they have kids and can’t find the time,” she said. “You can take one or two and throw them in your bag, and you don’t have to carry around a huge pack of wipes.”

The team is also planning to launch one new product in late 2019, and more are in the works for 2020.

All Sweat Cosmetics products contain sunscreen and are made with natural ingredients so they produce a lightweight finish. According to Taryn, the concept is to solve one simple problem for active women.

“We try to make it as easy as possible. It’s makeup for the lazy girl or the non-makeup girl,” she said. “We just want to make you feel more confident in whatever you want to do.”

That means women can look good whether they’re headed to a meeting, a yoga class, a midday workout, or a date.

Women who use Sweat Cosmetics are typically between 24 and 35, but its products also sell well with women 55 and older. That’s because the brand designs its products with everyone in mind.

This commitment to quality has garnered the company plenty of positive feedback on social media. Sweat Cosmetics hears from many customers who say they couldn’t wear sunscreen before because it caused their skin to break out. The company also receives feedback from women who say they can now wear makeup all day, no matter the activity.

Of course, reading those comments encourages the team behind Sweat Cosmetics to continue its work and keep growing the brand.

“It makes our whole day,” Taryn said. “We have amazing products that people love. There’s a need for it, and we’re trying to get them to as many people as possible.”