STOMP Out Bullying™ Stands Up Against Online Abuse, Homophobia & Racism by Teaching Young People to Be Kinder

The Scoop: STOMP Out Bullying is a nonprofit organization that works with students to reduce, prevent, and stop bullying in all its forms. The team raises awareness and offers support to at-risk youths through its HelpChat Line and peer-to-peer mentoring programs. In an effort to create societal change, STOMP Out Bullying promotes kindness, inclusivity, and equality in educational campaigns geared toward children, teens, and 20-somethings facing challenges in the social scene and dating world.

The modern dating scene has become overrun with bad behavior, particularly on dating sites and apps. Many singles have shared stories about ghosted conversations, catfishing profiles, and unsolicited photos, and we’ve even heard some personal accounts of cyberbullying, slut-shaming, and hate speech poisoning the online dating experience.

Fortunately, some moral leaders want to change the culture of apathy and abuse by emphasizing the importance of being kind to strangers and showing respect for others. STOMP Out Bullying is at the forefront of the movement to rid the world of cyberbullying.

STOMP Out Bullying advocates on behalf of victims of cyberbullying.

This nonprofit has organized anti-bullying campaigns and mentoring programs that have reached schools across the U.S., and it has raised awareness about the psychological impact of hate speech, harassment, and threats.

Ross Ellis, the Founder and Chief Executive Officer of STOMP Out Bullying, said the idea for this campaign began in 2005 before the term cyberbullying was even coined. At that time, Ross ran a child abuse prevention organization called Love Our Children USA, and bullying stood out as a prevalent issue facing modern young people.

“We started getting inundated with phone calls and emails about bullying,” Ross said. “I learned as much as I could and posted information on the website. Two days later, the website crashed, and I knew I was onto something.”

Ross created STOMP Out Bullying to speak out on behalf of bullying victims and to stand in support of children and teenagers in crisis. The nonprofit group offers educational resources, counseling, and youth leadership programs to inspire changes in attitudes and perspectives.

Through its year-round efforts, STOMP Out Bullying has empowered tens of thousands of young people to overcome their personal challenges, build up their self-esteem, and combat hate with love.

As Ross said, “We all share the common goal of changing the culture to make sure our kids and teens understand just what it takes to be kinder, more empathetic, and more thoughtful.”

The HelpChat Line Has Helped Over 100,000 Youths

As a leader in the anti-bullying movement, STOMP Out Bullying urges children, teenagers, and young adults to treat one another with respect and dignity. Its programs have resonated with digital natives ranging in age from 13 to 24. Young people often encounter bullies in their day-to-day lives, and they don’t always know how to stop personal attacks and not let insults get to them.

STOMP Out Bullying offers online resources to address all types of bullying and let victims know they’re not alone in their struggles. The nonprofit’s blog answers common questions about cyberbullying and recommends proactive strategies to deal with racism, homophobia, xenophobia, and other forms of hate.

STOMP Out Bullying promotes social campaigns to raise awareness about bullying prevention and rally people to this cause. Its events and hashtags have prompted positive conversations in classrooms and families throughout the U.S.

Whether you’re a parent, an educator, or a student, you can browse STOMP Out Bullying’s website to find informational guides to help you navigate the complexities and challenges of the digital world.

Cyberbullying can impact people of all ages, gender identities, orientations, and ethnicities.

In addition to its online resources and mentoring programs, STOMP Out Bullying runs a HelpChat Line for teenagers and young adults contemplating suicide. A trained team of counselors can give hope, guidance, and support to at-risk individuals, many of whom experience bullying or cyberbullying on a regular basis.

The HelpChat Line provides a safety net and a nonjudgmental confidant for people when they need it most, and that can literally save lives.

“I am proud that we assist all genders and races and work to end the hate,” Ross told us. “For the last 13 years, we have helped over 5 million youths resolve bullying and cyberbullying situations, have helped over 100,000 through our HelpChat Line, and saved over 6,000 lives through our various networks.”

STOMP Out Bullying can help end the cycle of negativity and hate by empowering youths to stand up for themselves, know their worth, and become part of the solution.

An Empathetic Team Gives Support & Encouragement to All

The STOMP Out Bullying team values diversity and inclusion, and its anti-bullying campaigns have provided meaningful emotional support and assistance to people from all walks of life.

Bullies can target people because they’re different, and that can lead to feelings of isolation and shame — which is why it’s important to stand shoulder to shoulder with minority groups and social outcasts. STOMP Out Bullying makes a point to welcome everyone with open arms and foster a community where everyone belongs and fits in. 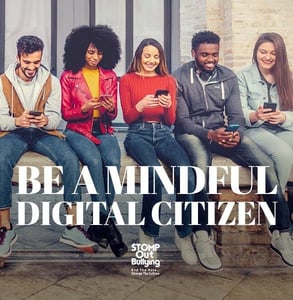 STOMP Out Bullying teaches students to treat one another with respect.

“Our team is very special,” Ross told us. “I knew that I could only select the best and most empathetic and compassionate people to be a part of this organization.”

The STOMP Out Bullying team includes a web designer from Brooklyn, a social media guru from Arizona, and a PR Person in Long Island, among others.

Ross said she’s grateful to have a fleet of celebrity contacts supporting his anti-bullying campaign as well. America’s Psychologist Dr. Jeff Gardere in on the Advisory Board, and New York Jets player Jonotthan Harrison has served as global ambassadors for STOMP Out Bullying.

Together all these different voices give encouragement and hope to today’s youth and help them overcome tough challenges on their way to adulthood.

“We hope teens will understand that they have a whole life ahead of them,” Ross said, “and that letting someone cruel take away their power is ridiculous.”

Swiping options abound on dating apps and sites, but civility is in short supply, so singles can wind up feeling more alone and rejected than ever. STOMP Out Bullying refuses to accept this toxic status quo and strives to reinforce kindness in the online world.

STOMP Out Bullying is on a mission to change hearts and minds, and its compassionate work has reached hundreds of thousands of youths across the country. This work is important because it chips away at the culture of hate and saves lives by teaching children that what they do and say matters.

“Knowing that we help these students makes all the difference in the world,” Ross said. “They walk away understanding that this cruel behavior won’t last forever and knowing that they have bright futures ahead of them.”