The Scoop: Sleep Genius is an app that uses neuroscience to help people sleep deeper, longer, and better. The app plays repetitive music compositions and soundscapes to lull the brain into a state of serene relaxation. Couples experiencing sleep difficulties can use Sleep Genius to train themselves to fall asleep quickly, wake up naturally, and maintain healthy sleep cycles.

Some couples encounter issues in the bedroom that cause them to lose sleep at night. Literally. When couples toss and turn all night, it’s a problem for their mental health and personal relationships.

It can be difficult to get two people on the same sleep schedule, and sometimes bouts of insomnia can disturb both sleep partners. According to one study, 63% of American couples sleep most nights separate from one another, and 26% of respondents say they sleep better alone. Bedtime should be the part of the day when couples come together, yet persistent sleep issues are driving some of them apart. 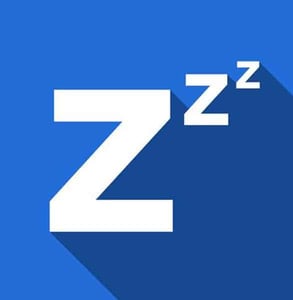 Sleep Genius has developed programs to recharge the brain.

Fortunately, there’s an app for that. Sleep Genius has developed smart technology to ease individuals and couples to sleep each night.

Since 2013, Sleep Genius has offered people a regimen to relax and recharge. Its musical compositions provide deeply effective auditory cues that naturally soothe the body and brain.

To date, over 2 million people have downloaded Sleep Genius and used it to improve the quality and duration of their sleep.

“It became obvious to us that we had to first tackle sleep issues if we wanted to tackle psychological issues,” said Sleep Genius Founder Alex Doman. “Good quality sleep is the cornerstone to health and well-being.”

The story of Sleep Genius begins with Advanced Brain Technologies, a company that develops neuroscience-based music programs to train the brain to learn at its optimum level.

The programs are intended to hack the human brain and help people reach their full potential. This forward-thinking team has worked with kids who have learning disorders as well as military veterans with PTSD.

For years, the researchers worked with people of all backgrounds and saw them make some progress. However, they encountered a roadblock in the client’s sleep habits. “Regardless of how good our interventions were, they couldn’t work as effectively if the client wasn’t getting enough sleep,” Alex said.

The Advanced Brain Technologies team realized they’d have to tackle sleep issues if they wanted to unlock the brain’s potential. Luckily, an auditory neuroscientist named Seth Horowitz was up to the task. Seth received funding from NASA to explore the science behind falling asleep and develop an algorithm to ease people into a deep, relaxed slumber.

NASA has spent decades exploring ways to help its astronauts get some shut eye while in space. The darkness of space throws the human body off its natural sleep cycle and leads to sleep deprivation. When astronauts lose sleep, they become more prone to making mistakes, and that’s dangerous for everyone.

So, Advanced Brain Technologies started Sleep Genius with neuromarketing expert Colin House to bring the NASA technology to market embedded in carefully crafted musical compositions that would lull people to sleep and reinforce healthy patterns. This program became the basis for the Sleep Genius app.

Sleep Genius offers a sleep-inducing music playlist that relaxes the body and the brain through rhythmic pulses and calming tones. The effect is similar to rocking a baby to sleep, according to Alex. “Sleep Genius is unique because all its music compositions have been scientifically designed to help people get to sleep faster and stay asleep longer.” 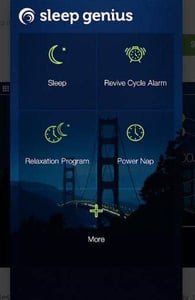 Each stage of REM takes about 90 minutes to complete, and most people require four to five sleep cycles a night to awaken fully rested. The Sleep Genius app supports these cycles with 90-minute and 180-minute musical compositions. Its signature Sleep program includes a variety of soothing atmospheric sounds and music. You may be listening to water drips or ocean waves one moment, and then shift into a piano or flute playing the next.

Sleep Genius reinforces a good sleep regimen, and that includes relaxing people before bedtime. The app offers a 30-minute music composition to help unwind at the end of the long day. The Relaxation Program has a calming effect on the mind and body, slowing people’s heart rates and putting them in a zen state.

Going through this relaxation process every day can help couples improve the quality of their sleep, and that positively influences their moods, health, and relationships.

Finally, Sleep Genius has developed a Power Nap program for those moments when you need a quick break. This program puts people to sleep and accompanies them through phase one of the sleep cycle before waking them up without a traditional alarm.

You can listen to these serene playlists on your smartphone, or you can get a comfortable SleepPhones Set to wear while you go to sleep.

Over 2 Million People Have Downloaded the App

People of all ages can use Sleep Genius to reduce stress and get some proper sleep. The music program has worked for students who are stressed out by exams, and it has worked for retirees who are battling insomnia. The team has even developed Sleep Genius Baby to help infants settle down in a cocoon of peaceful sounds. 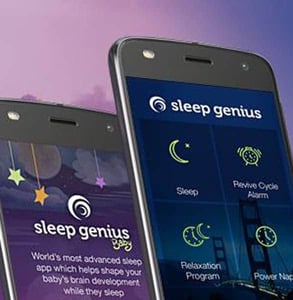 The Sleep Genius team knows the program works because they have seen it work. In a controlled experiment in Los Angeles, about 80% of participants who listened to the audio program reported sleeping better at night.

Alex said his mother spent over a decade getting only three to four hours of sleep per night, however, after using Sleep Genius, she has been able to go to sleep for up to eight blissful, uninterrupted hours.

Over 2 million people have downloaded Sleep Genius and benefited from its scientifically sound sleep programs. “Absolutely love it,” wrote Moses B. in a Google Play review. “It’s so non-intrusive and relaxing that I’ll wake up in the night and not realize that it’s playing.”

Sleep Genius users have reported feeling happier, getting healthier, and enjoying their bedtime and morning routines a lot more thanks to the app’s advanced sleep-inducing programs.

“Sleep Genius has a broad appeal,” Alex said. “Our users are international and span generations. They’re veterans, athletes, parents, college students, and everyone in between.”

Insomnia is a widespread health issue. According to the Sleep Health Foundation, about 1 in 3 people have at least mild insomnia. The results are chronic fatigue that negatively impacts people’s overall mental health. And insomniacs often report experiencing depression, anxiety, and stress in their personal lives.

Couples don’t have to resign themselves to that fate. They can take control of their sleep habits and reset the clock by turning to Sleep Genius. This high-tech app has developed musical compositions that guide people through healthy sleep cycles day in and day out. Sleep Genius programs encourage individuals and couples to fall asleep, get the rest they need, and wake up ready to tackle the day.

“Getting better sleep enhances everything we do in our lives,” Alex said. “We hear all these powerful stories about people losing weight, improving their relationships, and overcoming so many different obstacles, and it’s incredibly gratifying.”