The Scoop: RokShok intends to shake up the way people propose with a patented product that can conceal and then present the engagement ring while facilitating a picture-perfect moment. How does it do all that? With an ingenious disguise. RokShok looks like an average, nondescript battery case for a smartphone, but it opens up to reveal the ring, thus enabling modern daters to execute a surprise proposal and catch their beloved’s reaction on camera.

My older brother knew his girlfriend was expecting him to pop the question. They’d been dating for over four years, and it was just time. She had not-so-subtly found the ring she wanted online and forwarded the link to him. He knew he’d have to do some Jedi mind tricks to make the proposal a surprise, but he was up for the challenge.

First, he convinced his girlfriend that he was saving up for the ring, even though he’d already bought it. He told her it would take a few months of saving and another few weeks of shipping before the ring made its way to them. 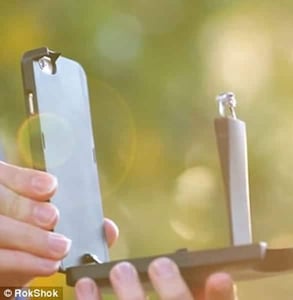 RokShok offers a modern alternative to carrying a conspicuous ring box in your pocket (or backpack).

Next, my brother found a deal for chocolate and fireworks for two next to Cinderella’s castle at Disney. He invited his girlfriend as an early birthday present. During their day at the parks, my brother’s cover nearly got blown when she grabbed his backpack looking for a snack and noticed something square-shaped jutting out. She froze, the beginnings of a knowing smile on her face, but my brother was ready for her. “Oh, that’s my charger,” he said, rummaging around and pulling out the decoy charger he’d packed.

He’d thrown her off the scent enough that when the fireworks went off, and he got down on one knee, she blurted out, “What? No! You didn’t!” It took her a couple moments to recover her senses enough to say, “Yes.”

My brother carried off his surprise proposal beautifully (and sneakily), but it took a lot of effort and forethought, and it nearly went up in smoke all because he couldn’t hide the bulkiness of the square ring case in his backpack.

This is a problem many guys and gals run into when looking to surprise a partner with a proposal. It’s not very romantic to pull a ring out from a gym sock, but it’s not very subtle to carry a block-shaped object in your pants pocket. So what are proposers to do? Well, RokShok has come up with a solution by engineering a ring holder into an iPhone case.

Now you can carry the engagement ring around in your pocket without arousing any suspicion. The case comes spring-loaded, so you can whip your phone out, present the ring, and give your partner a big surprise while your phone records the whole thing. This high-tech approach to proposals suits modern daters interested in creating a wonderful memory they can share with their friends and family members for years to come.

How a Boutique Photography Company Expanded Its Profile

Paparazzi Proposals is a premier photography company that specializes in discretely capturing proposals on camera. Since 2011, the photography team has mastered the art of hiding in plain sight with cameras ready to take professional photos from the moment the client gets down on one knee.

Whether you’re proposing in Paris, New Orleans, Miami, San Diego, or another major city, you can count on Paparazzi Proposals to help you plan a romantic proposal down to the last detail. The team can even bring along a bottle of champagne for the happy couple.

Led by the entrepreneurial James Ambler, Paparazzi Proposals’ photographers have captured the joy, surprise, and love on their client’s faces during surprise proposals. Hundreds of proposals have gone off without a hitch thanks to their knowledgeable guidance and technical assistance. And they have the portfolio to prove it. 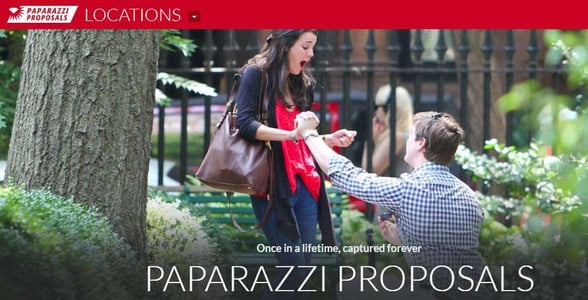 Paparazzi Proposals, the parent company of RokShok, captures proposals in romantic destinations across the U.S. and Canada.

Boston native Keith Glickman consulted with the Paparazzi Proposals in the month leading up to his proposal. He told them he wanted to capture his bride-to-be’s reaction himself using an HD camera hidden in the ring case. However, when he opened the case up, the camera was pointing straight up at the sky. When the big moment came, he missed his mark and instead of documenting a look of shock, he got a lovely shot of blue sky.

That disappointing experience led Keith and James to examine how surprise proposals work and imagine ways existing technology could make it better. Like, why in the 21st century do jewelers continue to present rings in large, obtrusive cases? Can a person propose and be in the moment while still capturing a photo or a video? In short, how could they streamline proposals to suit the modern dater?

James and Keith decided to use smartphone technology to build a smarter way to pop the question. They envisioned a phone case that could hold the ring, create a perfectly framed snapshot, and enable easy recording and sharing on social media. Thus RokShok was born.

“We wanted to create something that would be affordable to anyone who wanted to capture that moment,” James explained. “We came up with the prototype, and it just exploded from there.”

Leveraging Technology to Capture the Moment

According to The Knot’s 2017 survey, 91% of grooms had the engagement ring in their hand when they proposed, and 87% said they actually got down on bended knee. The traditional romantic gestures are alive and well, but the element of surprise has decreased somewhat in modern-day proposals. In that same survey, only 35% of brides said they were surprised by the proposal.

RokShok is on a mission to make planning and executing a surprise proposal that much easier. This ingenious ring case looks like a standard battery case for a phone, but it can secretly hold a ring with center stones up to 2.5 carats in size. 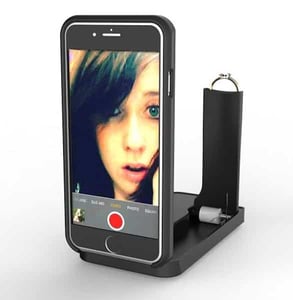 RokShok presents the ring on a stand, so it appears in the phone’s camera shot.

“It’s a discreet way to have the ring with you in your everyday gear,” James said. “The best part is a mechanism raises up the ring to be in the shot.”

When you propose using RokShok, you can present the engagement ring and have a camera facing your intended at the same. You can record the whole thing using your phone’s video or camera features, and the resulting videos and photos can be easily shared on social media. That means you don’t have to wait to share the good news with all your friends and family once he/she says “yes.”

“Guys love being able to hide the ring in something they can carry with them all the time,” James said, “and it’s also great to have the ability to take photos or a video they can share instantly on social media.”

RokShok isn’t available for general consumption yet, but the idea has already sparked great interest. Jimmy Fallon even mentioned it in his monologue last November. James said he expects a product line to be ready to launch in early 2019. The retail price will be $59.95. A small price to pay to capture a once-in-a-lifetime moment.

My brother spent the weeks leading up to his proposal constantly worried that his girlfriend would find out what he was up to and the moment he envisioned would be ruined. He took many precautions to keep her guessing and ended up giving her the surprise of her life.

The biggest risk he took was carrying the ring case in his backpack where it could easily be discovered and recognized. That traditional boxy shape is easily identifiable, especially by suspicious girlfriends, and that can foil even the best-laid proposal plans. Using RokShok as your ring-carrying case can keep that from happening.

Daters can use RokShok to set up a surprise proposal that’s easily shared on social media.

Thanks to two forward-thinking men, RokShok is gearing up to revolutionize the average proposal experience with a technological upgrade. This unique product can conceal the engagement ring in a two-inch-thick, nondescript phone case and present it with a flourish when the time comes. Plus, you’ll have the added convenience of having your phone in your hand while proposing so you can easily take a picture or video of your intended’s reaction.

“It’s so important to capture the proposal,” James said. “That’s part of the whole wedding experience now. It’s become this viral sensation on social media. Everything starts with that proposal story.”