The Scoop: RockMyRun rolled out in the App Store in 2011, and its unique music mixes have been shaking up workout routines ever since. A team of DJs curate playlists that are full of energy and can pair well with just about any exercise routine. Couples can put in their earbuds and take RockMyRun with them as they train for a marathon together, or they can broadcast RockMyRun’s playlists at home while working out to improve their health and strengthen their relationship.

Katie Addison is a lifelong athlete who played college soccer at Stanford, so when she recently tore her ACL — for the fourth time, no less — her chief concern was how it would impact her health and fitness routine.

Due to her injury, Katie is no longer able to kick a soccer ball. And, because she’s raising her one-year-old child, she can’t spend hours at the gym. So, she and her husband began creating an at-home gym in the storage room of their house in Denver. 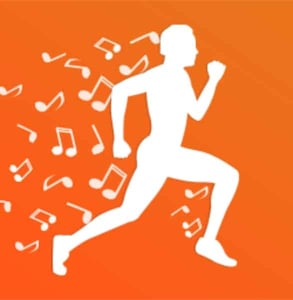 RockMyRun can pump up couples during their workout routines and help them grow closer together in their relationship.

Katie and her husband have installed a fitness cage, treadmill, and a bunch of other workout equipment that helps them exercise the way they want when they want. The home gym has also given the married couple the opportunity to work out together and challenge each other to reach their fitness goals.

While the couple go through their exercise routine, they use the RockMyRun app to play the kind of music that gets their energy levels up.

Katie is Chief Operating Officer at RockMyRun, and she stands behind its quality services. She told us the DJ-curated playlists are perfect for working out because they have a fast beat and seamless composition. One song starts right when the last song ends, so there isn’t any downtime or pausing in the listening experience.

Plus, RockMyRun offers such an eclectic variety of playlists that Katie and her husband have no trouble finding ones they can agree to blast from their surround-sound speakers during their workout date nights.

“It is really encouraging to work out with someone else. It really motivates me,” Katie said. “I like playing RockMyRun’s playlists on my headphones or through the speakers because it’s upbeat, and you can’t really find workout playlists like these anywhere else.”

Sync the Music Tempo to Match Your Heartbeat or Steps

RockMyRun has been in the fitness scene for nearly a decade now, and it has kept up a steady pace in terms of user engagement and growth. Many of its users fall in love with the app during their free trial and subscribe to get access to over 1,000 playlists curated courtesy of their favorite workout DJ.

The idea of making workout-specific music playlists is hardly a new one, but RockMyRun does it with style and gives users control over what genre to listen to and how fast the beats go. Users can set a custom tempo or have the music sync up with their footsteps if they’re going on a run. The iPhone app can even sync a person’s tunes with their heart rate. 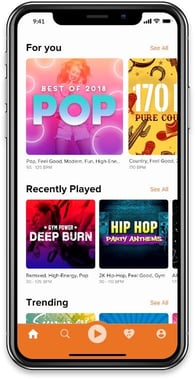 The app has over 1,000 mixes organized by genre.

The typical RockMyRun app user is between 30 and 50 years old and looking for a way to make their exercise sessions more enjoyable. Tens of thousands of people have incorporated RockMyRun into their workout routines, and many have left rave reviews about their experience.

RockMyRun currently has a 4.7-star rating on the App Store.

“Never been a strong runner, but I’ve challenged myself to go farther and harder,” said a RockMyRun subscriber. “This app has been instrumental (no pun intended) in reaching my goals!”

Despite its name, RockMyRun isn’t just a running app. Its playlists can accompany users as they lift weights, walk their dog, work out at the gym, or do just about any exercise anytime and anywhere they like.

Couples can set RockMyRun to play along with their workouts and keep their energy up. It’s a fun relationship-building activity that can support good health and good vibes at the same time.

“What I love about RockMyRun is it’s all high-tempo music that’s specifically designed for workouts,” Katie said. “The playlists are all created by DJs, so it has a club-type feel to it.”

The Tight-Knit Team is Passionate About Fitness

Software developer and entrepreneur Adam Riggs-Zeigen founded RockMyRun out of a desire to get people to run faster and farther. He had experience working as a DJ in a nightclub and running 5k marathons, and he wanted to bring some of the club energy to his running routine.

The RockMyRun app combines a love of music with a love of fitness to create a stellar experience.

In early 2020, Bill Donahue became CEO of RockMyRun and brought a wealth of knowledge to the company. Bill has been working in the fitness industry since he retired from the Marine Corps in 1999. For example, he worked for 16 years as a C-level executive at 24-Hour Fitness and MINDBODY.

Now under new leadership, RockMyRun is focused on getting the word out about the app and the benefits it can have on the workout routines of single, dating, and married folks. In the coming year, the RockMyRun team is aiming to increase the app’s brand recognition and expand its user base.

Katie described the RockMyRun team as a small family of eight employees. Team members are expected to take on a lot of roles and work in harmony together. They come from different backgrounds — from a veteran of the Marine Corps to an 80-year-old financier — but they share a common enthusiasm for health and fitness.

“I love working with every single person on the team,” Katie said. “And I trust what they do.”

The RockMyRun team has developed an app that earned praise from consumers, and it has also partnered with major fitness brands that want to join in the fun. The in-house DJs consult with fitness coaches to create custom playlists for gyms and fitness centers across the U.S.

During the coronavirus pandemic, some gym owners had to pause their membership with RockMyRun, but many of them are now back in full swing. Overall RockMyRun has seen higher consumer engagement now that so many people are working out from home.

“We’ve been fortunate in that many gyms stuck with us, and the consumer app has continued to grow,” Katie said.

Since its launch, RockMyRun has helped turn workout sessions into jam sessions. The app can keep up with fitness enthusiasts and provide excellent motivation for them to keep pushing themselves (and their relationship partners) while they push play on new music mixes.

Katie and her husband have hit the ground running with their at-home workouts, and RockMyRun has helped keep them energized and having fun in their relationship — from the first rep to the last.

Dating and married couples can use RockMyRun to make their workout sessions pop. The right playlist can provide an instant energy boost and make a home gym feel more like a nightclub. RockMyRun has become the go-to DJ and workout buddy for many health enthusiasts, including Katie and her husband, and it’s building momentum to take over the fitness world.

“It’s been so much fun for me,” Katie said. “I’m really passionate about fitness, and it’s exciting to know you’ve created a product that’s actually helping people in their workouts. So, the main thing we’re focused on right now is just getting the word out.”

Our readers can enjoy a 14-day free trial on the RockMyRun app and get into a fun workout rhythm with a partner or solo.