Rescue Chocolate: Buy Organic Vegan Treats for Your Special Someone While Helping Animal Rescues Throughout the U.S.

The Scoop: As a self-described chocolate addict and dog lover, Sarah Feoli combined her interests to create Rescue Chocolate, a company that sells tasty treats to benefit animal rescues. One dollar from the sale of every bar goes to support either a rescue of the month or an organization of the chocolate buyer’s choice, helping animals throughout the country. Further, the company aims to raise the profile of animal rescues doing good work around the U.S. For those looking for a meaningful gift for their animal-loving partner, Rescue Chocolate makes sweet treats and a big difference in the lives of dogs, cats, and other animal companions.

When Sarah Feoli first moved to New York City more than a decade ago, she went on a hunt for the best vegan chocolate she could find. She thought she might sample 10 or so options, but it turned out that dozens upon dozens of shops in the city made vegan chocolate concoctions.

“A hundred bars later, I had a real chocolate addiction and found that I was an expert. I discovered the different beans and flavors that created what I liked in chocolate,” she told us.

Sarah’s interest in chocolate didn’t exactly come out of nowhere, as she has a background in developing vegetarian food festivals around the country. But what did take her by surprise in her early days in New York City was a small picture of a pit bull in need of adoption that was posted on a website.

The dog’s name was Mocha, and though Sarah had grown up having dogs, she didn’t think she could have a pet with her busy schedule and small apartment. When she kept seeing the image of the sad-looking pit bull, she eventually realized she could no longer resist adopting Mocha. 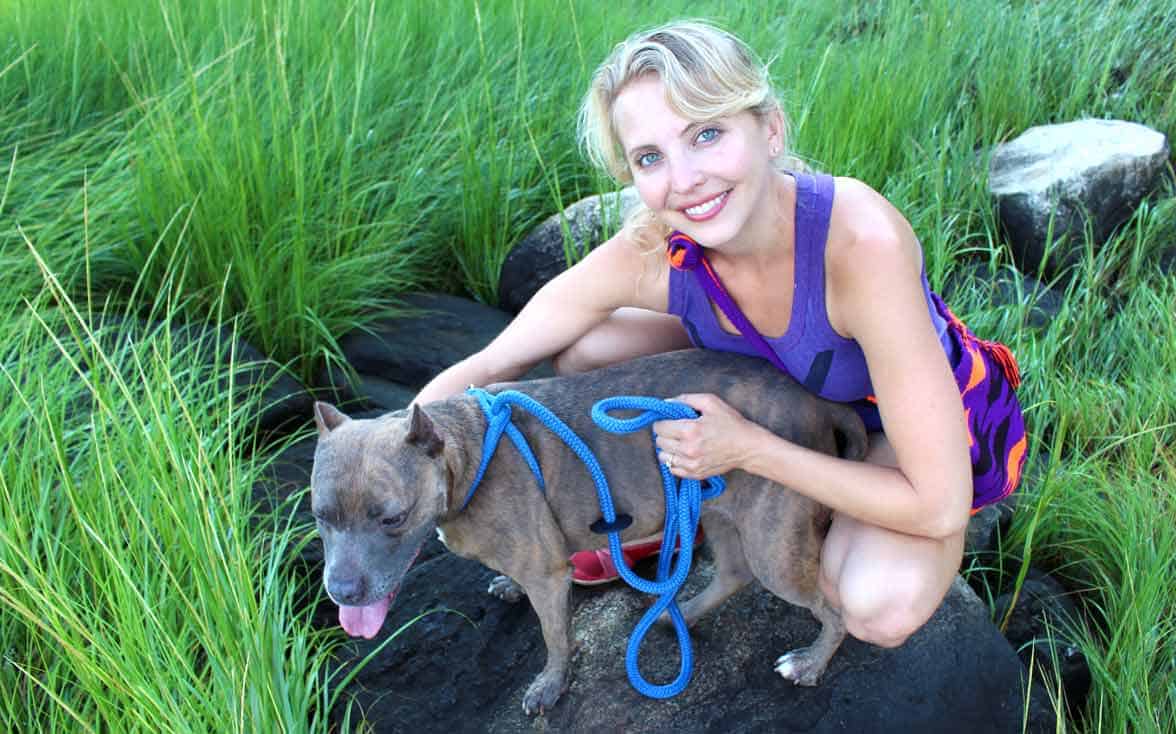 Sarah Feoli combined her love for her rescue dog, Mocha, and chocolate treats into Rescue Chocolate.

But Mocha did much more than offer Sarah companionship. She also spurred an idea.

“One day, when I was taking Mocha out for a walk, I had this idea for Rescue Chocolate,” Sarah said.

By the time she and Mocha returned home that day, Sarah had all of the specifics about Rescue Chocolate planned out.

Sarah said she learned how many animals needed homes and the challenges rescues faced in raising money to support them. She also knew how much everyone loved chocolate. So, she decided to combine the two into Rescue Chocolate, a company that gives people their chocolate fix while helping animals.

In the decade since that fateful walk, Rescue Chocolate has created seven distinct flavors and partnered with rescues across the country, and its products make the perfect gift for a partner who loves both animals and chocolate.

When she started Rescue Chocolate, Sarah was already an expert on vegan chocolate. So, she knew she wanted her products to be vegan, organic, and fairly-traded.

“We wanted to have a product that would benefit animals, not exploit them,” Sarah said.

To make the chocolate a reality, she partnered with executive chef Jean Francois Bonnet at the Tumbador chocolate factory.

Together, they came up with ideas for both the consistent flavors, as well as ever-changing seasonal bars and truffles.

Most importantly to Sarah, all of the company’s flavors are meaningful.

“Each chocolate bar highlights a different issue in animal rescue. We wanted to educate the public,” Sarah said. 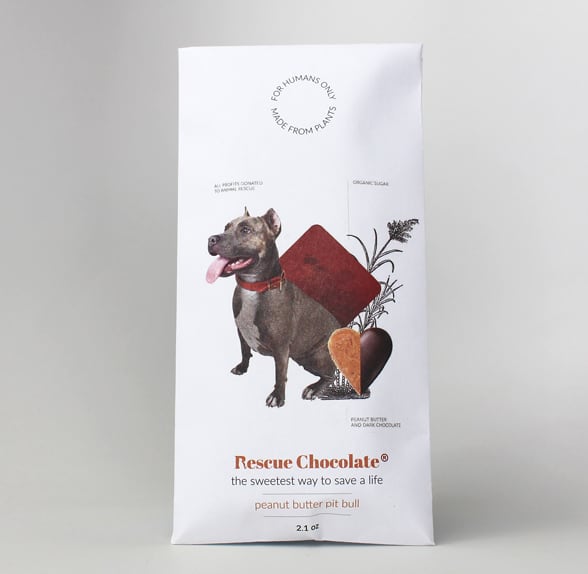 Peanut Butter Pit Bull is one of Rescue Chocolate’s most popular products, and it highlights the plight of pit bulls.

Flavors include the Mission Feral Fig bar, a fig, cranberry, and almond chocolate bar that raises awareness about feral cats. The Forever Mocha bar, made with hazelnut praline and coffee, emphasizes the importance of committing to pets for their whole lives. A plain vegan chocolate bar called The Fix highlights spaying and neutering your pets.

That bar, of course, is close to Sarah’s heart because it focuses on the plight of pit bulls, like Mocha, trying to find forever homes. Though the breed has a reputation for being aggressive, well-trained pit bulls are kind dogs and make loving pets.

The company’s packaging is a love letter to Mocha, as well. On every bar is a photo of Mocha, with her head cocked to the side, next to images of the key ingredients in the chocolate.

“Mocha is the mascot for our company,” said Sarah.

At the same time, the company raises awareness about a rescue’s mission by linking to its website. In July 2019, Rescue Chocolate donated a portion of its proceeds to All Souls Connected, a Pennsylvania nonprofit that works with feral cats.

“We mostly work with dog and cat rescues, but we sometimes work with farm animal rescues that care for chickens, pigs, and rabbits. We even have a rat rescue we work with,” Sarah said. 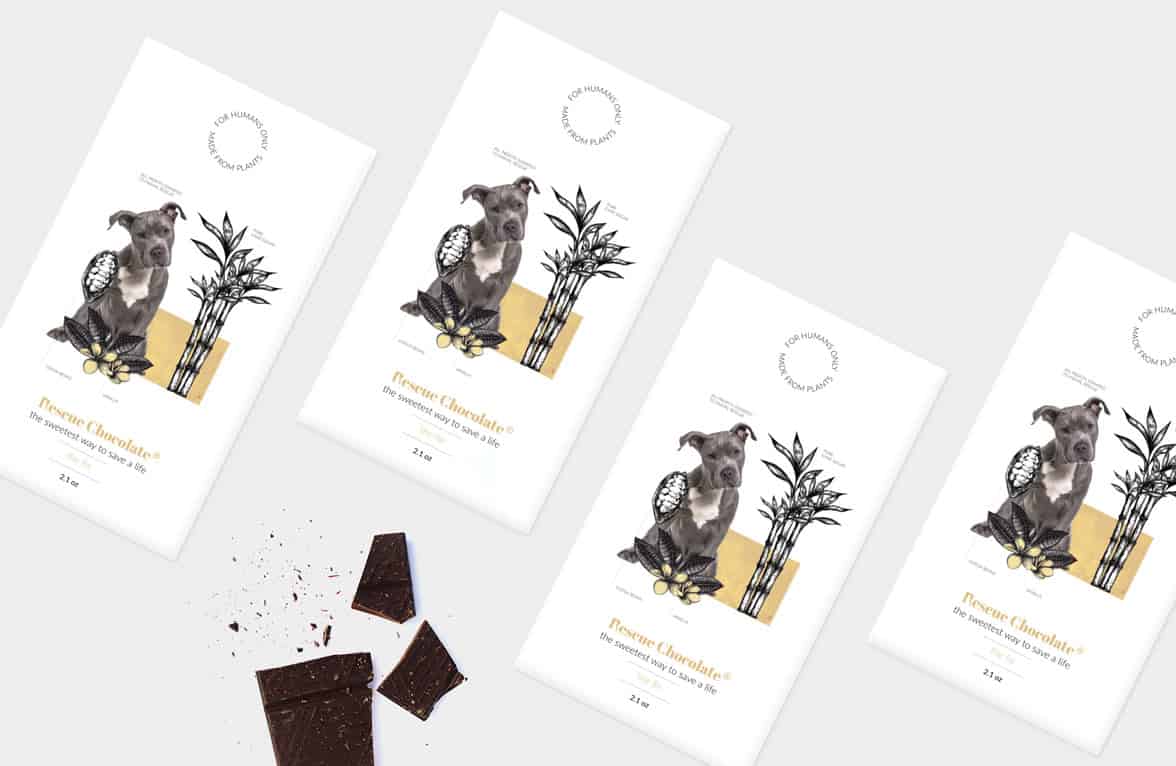 If chocolate buyers have a favorite animal rescue, they can choose that organization as their Rescue Chocolate beneficiary.

“Any group can participate by sending their members to our website and entering the affiliated rescue. That rescue will get a dollar from each bar sold,” Sarah said.

Like most aspects of Rescue Chocolate, the focus on animal adoption was also inspired by Mocha’s story. When Sarah adopted her in 2009, Mocha was the first dog rescued by an up-and-coming nonprofit called Foster Dogs, Inc. The organization was developing a foster network that allowed it to save and house more dogs than traditional shelters do.

Rescue Chocolate’s goal isn’t just to donate money, but also to raise awareness of the issues that rescued animals face in getting adopted.

“Any breed or age you are looking for, there will be a dog that needs a home. Petfinder is a great resource. A pet may not be in your city, but there will be people willing to drive to you,” Sarah said.

Rescue Chocolate: Give Your Partner a Gift With a Purpose

Rescue Chocolate has already made an impact on animals’ lives, and it plans to continue that mission well into the future. In the coming months, the company will introduce new packaging, its first significant change in this area in nine years.

“It was wrapped in foil and then in paper. Now, it features a pouch that you can reseal,” Sarah said.

Rescue Chocolate is always thinking about its customer experience and even includes ice packs and insulation on orders shipped during the summer months. Customers can be sure that if they order a bar for their partner, it won’t arrive melted and ruined.

Sarah is working on updating the website to make it more user-friendly, as well as seeking out rescues that need funding and time in the spotlight.

Rescue Chocolate’s efforts have earned it a following of people who give the chocolate to family and friends. Some even give the bars to their veterinarians to thank them for helping their pets. Others give it to friends who watched their pets while on vacation.

Sarah said that, occasionally, couples give away the chocolate at their weddings.

“We do wedding favors by customizing the packaging with a picture of the couple’s dog. It’s special to be part of their big day and reach a new audience,” Sarah said.

A decade after adopting Mocha and starting her company, Sarah said she is still excited to work with two of her passions: chocolate and dogs.

“It’s chocolate, which I love eating every day, and, with it, I get to support advocacy and rescues,” she said.