The Scoop: Sometimes, the most memorable date nights happen at places with casual, fun atmospheres. In Chicago, Public House Gastropub & Dining Hall offers that experience for couples. The relaxed eatery has a TV at every table for watching sports and offers delicious shareable meals, including classic burgers, chicken wings, mac and cheese, and other favorites. The menu also includes more than 100 beers and Public House’s famous cake shake desserts. For providing a lively date night in Chicago, Public House has earned our Editors’ Choice Award.

According to a study released by Pew Research, almost half of single adults in the United States think it’s harder to have a great date today than it was 10 years ago.

Between finding someone who meets their expectations and wanting the same things out of their date nights, the landscape can be tricky to navigate. Add in the dining preferences and the ever-present political conversations, and it isn’t hard to see how dates could get derailed. 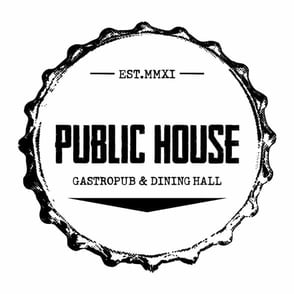 But the answer isn’t always to spend a lot of money on a fancy, white-linen dinner for two. That can actually serve to put more pressure on both people. Often, a casual get-together in a fun and relaxed atmosphere can make for the best night out.

The Public House Gastropub & Dining Hall, located in Chicago’s River North neighborhood, takes the work out of planning a pressure-free date. The easy-to-relax spot has a television at every table, a menu filled with comfort foods to share, and more than 100 beers on tap. Live sports are always on, and the ambiance helps keep the conversation going from the first bite to dessert.

“We’re something that River North lacks. It has a ton of restaurants, but there aren’t a lot of bars and places to watch sports in the area,” said Dayna James, Public House’s Senior Marketing Manager. “We get tons of comments and reviews from people who have had their first dates at Public House, and here they are five years later engaged or married with kids. We love being that place.”

A Chicago Dating Destination for More Than a Decade

One of Public House’s founders worked as a promoter for trendy restaurants, bars, and nightclubs, and the other was managing restaurants throughout Chicago. As the two became best friends, they realized that they both shared a passion for the industry and had developed complementary skills.

They decided to open a nightclub called the Stone Lotus, which fast became one of the hottest spots to go for a good reason: It offered a fantastic menu.

“People went there and raved about their late-night food, burgers and chicken tenders,” Dayna said. “That’s when they decided to expand into the restaurant side as well.”

When they opened Public House, the gastropub concept was just starting to gain momentum as a great place to spend casual time with friends or that special someone on date night. Its comfort foods and extensive beer selection continue to attract Chicago diners and grow in popularity.

Couples and families flock to Public House, which also shows live sports on a 30-foot HD TV wall with eight televisions playing multiple games. Almost every night of the week, a DJ will play music well into the evening.

“Come to the Public House if you’re looking for a more laid-back, fun environment for a date, versus something more uptight and fancy,” Dayna said. “For couples, it’s a place that holds a special meaning in their hearts. We hold our service to a standard that makes it memorable to them.”

It’s consistently featured in articles that suggest where to watch the Super Bowl or the Kentucky Derby in Chicago. It also earns plenty of shout-outs from the media for its delicious menu.

The Public House is perhaps most famous for its chicken wings, which diners can order in traditional or smoked varieties. They can also choose from sauces that include BBQ, spicy buffalo, or “unbearable” — a flavor that is a favorite of Bears (and Bulls) fans.

Wings and cake shakes are two of the most popular menu items at Public House.

It also serves up a classic burger and piles of nachos, on top of which diners can add skirt steak, pulled pork, chorizo, or chicken. They can also dig into a bowl of mac and cheese or snack on a burrata flatbread. The menu is filled with items that couples can share — or not — on a date.

But, no matter how much they eat, Public House recommends diners save room for dessert. It often integrates beer into its menu items — including its house-made pretzel with cheddar beer fondue — but its specialties are its cake shakes. For example, its Chocolate Porter Cake Shake is made with Boulder Shake Porter, chocolate ice cream, and chocolate cake.

There’s a vanilla version with JP Casper White Stout, and often a seasonal option featured as a special. If daters are feeling especially good, they can even add a shot to make it a boozy, sugary treat.

Public House: A Relaxed Atmosphere for Individuals, Couples, and Families

Along with a fun atmosphere and a menu filled with delicious comfort foods, Public House also has an extensive list of adult beverages to put a nightcap on a date. It has about 30 beers on tap and an additional 70 or so available in bottles.

For cocktails, patrons can either order their own or, for some selections, get a pitcher to share. Classics like a Perfect Manhattan and a Darn Old Fashioned are available, along with interesting twists like a Strawberry Mule — with Ketel One, ginger, and lemon.

The menu includes wines, seltzers, and sangrias to sip, too. Of course, those who don’t partake can still order fun, spirit-free cocktails.

It’s more than just beer aficionados who stop into Public House. Because it’s located close to the Magnificent Mile of North Michigan Avenue, it’s a great place to stop in to relax during a day of shopping.

Tourists and locals alike go there to watch live sports and relax.

With all the action, there is a lot to talk about on dates, Dayna told us.

“If it’s the first date and you’re nervous that you don’t know where the conversation will take you, it’s a good place where new topics can be brought up with TVs all around,” she said. “We see a lot of cake shakes on tables for dates. It’s a fun way to end your meal with a sweet treat.”

The team loves to hear it when couples mention that they loved their time together at Public House. Dayna said it makes all the hard work, including up-to-date health and safety procedures, worth it.