The Scoop: The name isn’t the only memorable thing about popular Nashville eatery Peg Leg Porker. The restaurant has been named the best barbecue joint in Tennessee, and its casual atmosphere appeals to a wide range of diners. Friends, couples, and families can spend quality time together over delicious food and unique bourbon drinks at the establishment’s rooftop bar. Peg Leg Porker Owner and Pitmaster Carey Bringle is serious about providing tasty staples of Tennessee barbecue, but only the traditional meats of chicken and pork — no beef allowed.

Memphis was the epicenter of Tennessee barbecue until Nashville joint Peg Leg Porker came along to challenge that notion. The restaurant has been gaining notoriety around the state — and the country — for its unique style.

The magazine writes, “In Tennessee, a Nashville joint prevailed over barbecue capital Memphis. At Peg Leg Porker, in the city’s Gulch neighborhood, Kool-Aid brined pickles are on the menu as well as the Memphis Sushi plate — a cheeky name for the traditional sausage and cheese plate.” 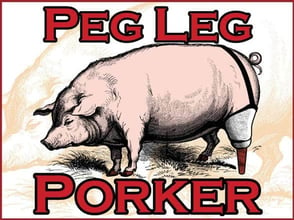 Peg Leg Porker is a fun place to bring someone special.

While Peg Leg Porker has only been around since 2013, the brand itself has been in the making for decades. Owner and Pitmaster Carey Bringle has been creating dry-rub ribs, smoked chicken, and pulled pork as a cook and caterer for 35 years, developing a sterling reputation for flavor. Carey’s barbecue developed such a following that he eventually decided to open his own place.

Friends, families, and couples looking for a lively, yet casual, evening out have likewise fallen in love with Peg Leg Porker.

“We’re the perfect place to bring a date. We have a full bar and great food,” Carey said. “It’s fast and casual. You come up to the counter to order. We call out your name, and you come get your food.”

Though sometimes the line can reach up to 100 people on busy nights, the restaurant is quick with service. You and your partner may have to wait in line on a busy night, but you’ll have your food soon after you place the order.

While you’re waiting, you can check out the atmosphere, which highlights family, music, and the restaurant’s many accolades and accomplishments.

“We have cinder block walls and concrete floors,” said Carey. “We play blues and soul, and all the pictures are our family and our stories. It’s a fun, vibrant atmosphere.”

Turning a Personal Setback Into a Memorable Family Brand

While Peg Leg Porker is certainly a memorable name for a restaurant, it’s also Carey’s way of creating something positive out of a bad experience.

As a 17-year-old, Carey lost one of his legs to bone cancer. At the same time, he’d just started cooking barbecue and needed a name for his business. He poked fun at himself in choosing the self-deprecating moniker for his restaurant.

“I had to come up with a team name, and I chose Peg Leg Porker,” he told us.

The restaurant has always aimed to develop that kind of easygoing attitude for its guests. Carey and his wife own the restaurant, and it’s operated by a small team of managers.

Peg Leg Porker caters to all types of people, and the menu offers a little something for everyone.

“Our demographic is everyone from small children to 90-year-old barbecue lovers,” Carey said. “We run the gamut.”

The restaurant has something for everyone, from dry-rub ribs to barbecue nachos.

The restaurant’s commitment to Tennessee barbecue, the type that Carey grew up eating, is a big part of what keeps guests coming back for more. Favorite dishes include the dry ribs or the yard bird — which is half of a barbecue chicken. Other diners enjoy the pulled pork barbecue sandwich or the barbecue nachos.

But don’t come to Peg Leg Porker looking for brisket.

Though Peg Leg Porker has won award after award, Carey isn’t one to rest on his laurels. Instead, he responded to the massive crowds that flock to his restaurant by building a 9,000-square-foot, second-floor addition to the restaurant. The extra space also gives diners the option to rent out unique spaces for their parties.

Not only can you hold a private event upstairs at Peg Leg Porker, but you and your date can also get drinks as tasty as the barbecue at the restaurant’s rooftop bar, the Pig Pen.

“The Pig Pen is a fun place to connect, and a great place for couples to have a drink with a beautiful view of the Nashville skyline,” Carey said.

The second-floor addition to Peg Leg Porker offers a view of Nashville’s skyline.

The bar is a natural fit for Carey, a man of many talents who also produces a Peg Leg Porker Aged Bourbon. This local staple, along with beer and whiskey, is what most bar patrons prefer to order. Carey recommends the Pork n’ Stormy, which is his brand of bourbon mixed with ginger beer. For the more adventurous drinkers, though, the bar serves up a champagne margarita or a pickle juice margarita.

You and your date can wash down those drinks with snacks like hot wings, pork rinds, or the adventurous Kool-Aid pickles mentioned in Southern Living. A night of indulgence with your partner wouldn’t be complete without a fried pie to end the evening; Peg Leg Porker’s fried pies come in chocolate, peach, or apple varieties.

While Peg Leg Porker has earned plenty of praise, including being named the best barbecue joint in a state known for the style, Carey doesn’t need to gush over his own restaurant — guests will do that for him. With 4.5 stars on Yelp, Peg Leg Porker is definitely a hit.

Mary H. writes, “Dry rub, dry rub, dry rub! Hands down the best we have ever tasted. From the wings to the ribs, that rub is smoky and has the perfect amount of salt and sweetness.”

Solomon K. agrees, saying, “A must stop by those traveling through Nashville.” 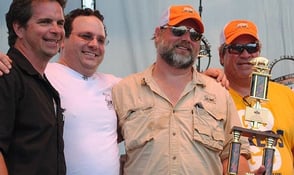 Peg Leg Porker continues to win awards for its barbecue.

In addition to Yelp and Southern Living, Peg Leg Porker has received almost every award in the barbecue business, from Zagat’s Best BBQ Place in Nashville to Bon Appetit’s Champion Sauces award. Carey has also been invited to cook at the prestigious James Beard Foundation in New York City twice.

Despite all of these big-time accolades, though, Carey likes to keep things simple and said he enjoys what he’s doing. He records a podcast with his friends called “Live From BS Corner” on the restaurant’s rooftop bar. He believes in Southern hospitality, and, in the end, he takes his greatest pleasure in bringing people together through barbecue.

“Barbecue is about family and friends and getting together,” Carey told us. “When we can provide that community, it’s rewarding and what we like to do.”