The Scoop: Ben Gillenwater was an avid traveler who enjoyed taking quick adventures to exotic locations almost weekly, and though he became skilled at packing, he often found himself missing an important item or two. So Ben created PackPoint, an app that mimics the detailed packing lists that he would make for himself to ensure travelers bring the right gear. With the app, individuals, couples, and families can enter their destination, time frame, and itinerary, and PackPoint will generate a customized packing list to help them remember to bring the essentials.

For a decade, Ben Gillenwater traveled each week for his job and divided his time between offices in Los Angeles and Washington, D.C. Later, his career took him to Singapore. From there, he regularly ventured to cities throughout Southeast Asia.

During that time, Ben became more than just a competent packer. His packing routine became second nature because he was so accustomed to filling his suitcase with the necessities. But that didn’t mean he always remembered everything he needed for his journey. 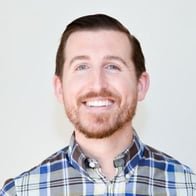 Ben Gillenwater founded PackPoint to help travelers remember what they need to pack.

“I remember thinking ‘I wish I’d brought my shorts’ or ‘I wish I brought my umbrella.’ Once in New York, it was so cold that I wished I’d brought a heavy jacket,” he told us.

Ben thought that forgetting necessities was just part of traveling — until his brother almost missed his flight because he forgot something important.

“My brother and I were taking a business trip to an island in Thailand, and he forgot his passport. He actually took a taxi back to get the passport and barely made the flight,” Ben said.

That close call got Ben thinking about how he could eliminate those forgotten or missing items altogether. So he leveraged his experience as a technology executive and a traveler to develop an app called PackPoint.

PackPoint provides travelers with detailed lists of necessities based on where they’re traveling, when they’re leaving, and what activities they plan to take part in upon arrival. It can be particularly useful for couples because it helps ensure their trip gets off to a smooth start.

The app is an excellent resource for both novice travelers and experienced jet-setters, like Ben.

“Every time I travel, PackPoint has something on my list that I would have forgotten. I think that’s so cool,” he said.

Ben developed the PackPoint app — available on iOS and Android — based on how he prefers to pack.

“I built PackPoint for myself, so it reflects how I travel and think,” he said. “Apparently, people like the way that I pack.”

For example, Ben typically chooses to travel light, even if that means wearing items of clothing more than once or doing laundry on his vacation.

“If you check a certain box, you can let the app know that you’re happy to wear your shirt or pants more than once,” he said. 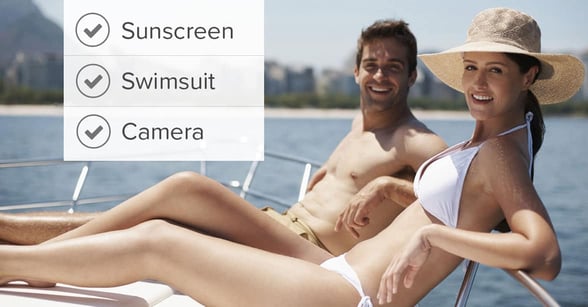 Ben understands that everyone doesn’t pack the way he does, so he asked a wide range of travelers to share what they put on their packing lists. He spoke with female friends and friends with kids about what they’d need to pack for vacation.

Couples and families can also use PackPoint to coordinate their suitcases. For example, one person can make a list and share it with a partner through a Google account. Or a spouse could create a packing list and then send it to a partner, so they don’t bring duplicates of the same item.

“I’ve used PackPoint myself with my girlfriend, so I’ll remember to pack something for a picnic or bring what we need for a trip to the beach,” Ben said.

That inclusivity and versatility have also contributed to its widespread popularity. During its six years in operation, users have made more than 2 million packing lists a year, and the app has been translated into 11 languages.

Next, travelers tell PackPoint where they’re traveling, when, and for how long. The app uses that information to predict the weather for the vacation. Because if you’re traveling to Vietnam during the rainy season, you don’t want to go without galoshes.

“We have a connection with a weather service called Dark Sky. It’s the only weather service that offers a year of future-looking dates,” Ben said. “Even travelers with trips six months out can start planning.”

Travelers also select whether the trip is for business or pleasure. After that, the app prompts them to choose different activities they plan to take part in. Options include hiking, fancy dinners, camping, photography, and swimming. Choosing the activities provides the app with more information about the items a traveler will need.

PackPoint then generates a detailed list based on that user information. For example, if someone suggested that they will be taking photos on their trip, the app will suggest packing the camera, tripod, memory card, and batteries. And if a user doesn’t want one or more suggested items on their packing list, they can hide those options.

Finally, users can share their completed packing lists with others via email or text message.

The app’s reliability and versatility are one reason why Ben loves to refer to the PackPoint app tagline: “You’ll never forget your ______ again.”

Since PackPoint launched in 2013, Ben hasn’t paid for any advertising for the product, but the app has generated a considerable amount of buzz nonetheless.

The first national platform to recommend PackPoint was Lifehacker, and, soon after, Apple moved it into the store’s Recommended Apps category. That publicity helped PackPoint attract a steady stream of new users. 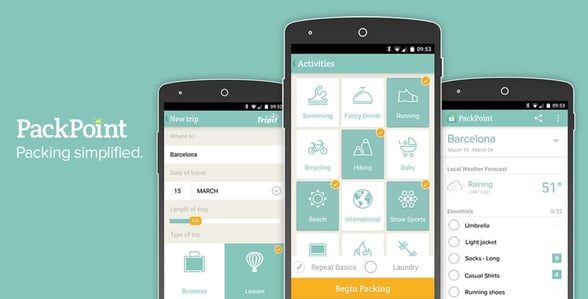 The PackPoint app has been downloaded nearly 5 million times and is available on iOS and Android.

One reason for the massive response is that most of PackPoint’s features are free. However, the app does offer a few additional features for users through its premium version, which is still affordable.

“You can connect PackPoint Premium to EverNote and Trip-It, and the app will instantly make a new packing itinerary for any trip you book,” Ben said. “You can also customize the essentials category. For example, you could delete bringing a book and bring a Kindle instead.”

Ben said feels that PackPoint serves its purpose, so there’s no need to add more bells and whistles. Rather than rolling out new capacities or options, he thinks the app does what it set out to do well. He still maintains and updates the app, however, especially considering constant rollouts of Apple and Android software.