The Scoop: When Midwesterners are ready to take a break from dinner-and-a-movie date nights, they can catch a show at the Omaha Community Playhouse. For nearly 100 years, it has staged some of the best productions in the region, and the performances have a home-grown feel, as most of the actors are from Omaha and its surrounding communities. The playhouse has a wide variety of affordable shows throughout the year, so daters are sure to find something that sparks their interest — and maybe even some romance.

The American Association of Community Theatre can’t say for sure when the localized form of performance art was created, noting that it went through many iterations before it became common throughout the country. However, the association does know that the term “community theater” wasn’t coined until 1917.

That makes it all the more impressive that the Omaha Community Playhouse is celebrating its 95th season with its 2019-2020 slate of performances. The playhouse has grown into the largest community theater in the U.S. by gathering local talent to create shows that reflect a broad cross section of people in Omaha and its surrounding communities.

“It feels wonderful to be a part of something like the Omaha Community Playhouse, and I think most people would agree that it is bigger than any one person or team,” said Allyson Wagner, Director of Marketing and Public Relations at the playhouse. “It’s been around for almost 100 years now, and everyone involved is not only thrilled to be a part of it, but I also think we all feel a sense of responsibility to ensure that we’re perpetuating the mission of the playhouse for another 100 years.”

The Omaha Community Playhouse is celebrating its 95th anniversary.

Unlike other performing arts centers in the area, the Omaha Community Playhouse only offers shows produced with resources from Omaha. That means all of the costumes, sets, and props are locally made.

And, of course, most the actors are community members who put weeks or months of effort into each performance. The playhouse not only offers classic favorites, like “Annie” and “A Christmas Carol,” but also features recent Broadway hits like “Once,” “Bright Star,” and “Sweat,” all of which can make for an exciting date night.

“What sets us apart is that everything is created right here by creative members of our community,” Allyson said. “The majority of our audience is from Omaha, but we have folks who will travel from all areas of Nebraska or Iowa for the weekend to see a show here. Also, a notable percentage of our audience is made up of people traveling from all around the country, and even internationally, who find themselves in Omaha looking for something to do and decide to attend a show.”

Couples from the Midwest and beyond can visit the Omaha Community Playhouse for a fun, intimate evening that can be far more stimulating than dinner and a movie.

A Variety of Productions to Entertain Everyone

The playhouse’s aims to offer something for every type of person, which is made clear by looking at the variety of performances scheduled on its calendar.

“We just feel the performing arts are such an important piece of society and bring so much to the community,” Allyson said. “We want to ensure that we offer something for everyone, in terms of the types of shows we’re doing as well as what audiences may want to participate in those shows.” 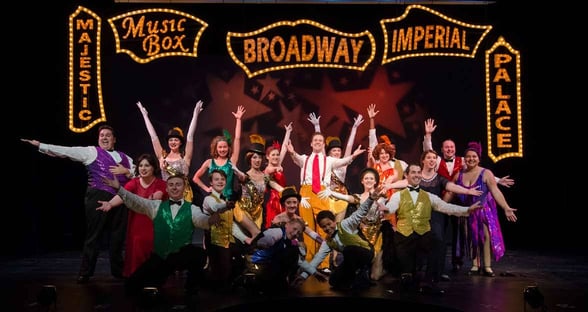 Omaha Community Playhouse performs classics from both the stage and the screen.

“We have everything in between: shows like ‘A Raisin in the Sun,’ which is a five-time Tony Award winner and a classic piece of American theater, and a newer one called ‘Native Gardens,’ which is one of the most produced shows of last year,” Allyson said.

Allyson told us she’s particularly looking forward to a production of “Once,” a musical movie from 2007. The actors in “Once” also serve as the musicians for the show, with their characters playing musical instruments on stage throughout the show.

Other highlights this year include “The Color Purple,” an adaptation of the Alice Walker novel, and “Bright Star,” a bluegrass-style musical written by comedian and musician Steve Martin and singer-songwriter Edie Brickell.

Couples Can Connect Through Events and Educational Programs, or They Can Even Perform Together

A date night at the theater can be a romantic experience that’s more engaging than another night with Netflix. However, some couples may want to get more involved with community theater, and the Omaha Community Playhouse allows them to do that.

“We have a lot of families, married couples, and people who are dating who perform in shows together. All of our actors are members of the community and have gone through the audition process,” Allyson said. “A lot of times, we’ll have married couples end up in a show together. Earlier this year, we did ‘Shrek, the Musical,’ and our Princess Fiona was married to the guy who played Pinocchio. But even if people don’t want to audition together, we offer other opportunities.”

Couples can sign up to volunteer at the playhouse in capacities that suit their skills. Those opportunities include building sets, helping people find their seats as an usher, or working at the ticket booth.

Another option for a fun time together is signing up for one of the playhouse’s classes through its educational branch, called the Henry Fonda Theatre Academy. The academy offers courses throughout the year for children and adults and includes everything from musical theater to stage combat. Allyson told us the classes tend to last between four and six weeks.

“We have a lot of fun opportunities, on the educational side, for couples who are looking for more of an ongoing hobby or bonding experience they can do together,” she said.

“It’s more of a communal experience when you see living, breathing people on stage who have rehearsed every day for two months to put together a production. And it’s not just the actors, but the costumes and the set and all of the backstage crew making the transitions run smoothly,” she told us. “It’s a piece of live artwork that’s more of an experience than seeing a movie or watching something on Hulu. I think it’s something that everyone should experience and is beneficial for the community to see.”

“We try to make it inclusive, so people who can’t afford to buy a full-price ticket can still come experience live theater.” — Allyson Wagner, Director of Marketing and Public Relations

There are nine shows each season, with three or four special events held every year, and the team understands that not everyone can afford a $50 ticket for themselves and a date — which is why they’ve created several programs to make tickets accessible to everyone.

“For couples, we have discount nights, which you can find on our website,” Allyson said. “Sometimes people think they can’t pay $50 a ticket for themselves and that special someone, but we’ve got tons of discounts that we offer.”

For example, Lucky 7 tickets for students — including those in college — allow them to grab opening weekend tickets for just $7. Twilight tickets are half-price if you head to the box office on the day of the performance. There’s also What a Deal Wednesdays, during which tickets are just $10 on the first Wednesday for every main stage show.

“We try to make it inclusive, so people who can’t afford to buy a full-price ticket can still come experience live theater created right here in the community,” Allyson said.