The Scoop: Breakfast can be one of the most fun, casual meals of the day, which makes it a great date option for couples. The staff at New Orleans Cake Café & Bakery, located on the edge of the French Quarter, has seen plenty of love blossom over its delicious omelets, grits, and coffee. When Mardi Gras season comes around, the bakery is a go-to spot for a delicious King Cake to share with that special someone. For its relaxed atmosphere and delicious menu that fosters connections between people, New Orleans Cake Café & Bakery has earned our Editor’s Choice Award.

When Steve Himelfarb was 30 years old, he decided to change paths after already having a successful music career. He wanted to work in the restaurant industry and thought he could learn about the business from the ground up by starting as a dishwasher.

But a friend showed Steve some recipes, gave him some tips, and encouraged him to start by baking. Before he knew it, he was selling slices of cake door-to-door around New Orleans.

“I taught myself how to bake from scratch,” Steve said. “I always looked at baking out of my house and selling slices of cake as busking (or street performing), because doing that is a lot like going door-to-door. And I have customers 25 years later who I met that way.” 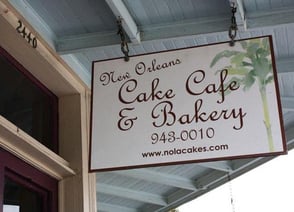 New Orleans Cake Café & Bakery is located on the edge of the French Quarter and serves sweet treats and savory meals for breakfast and lunch.

After five years of perfecting his recipes and earning a reputation around the city for his sweets, Steve opened a small restaurant space in the French Quarter in 2004. A year later, Hurricane Katrina decimated the city. While New Orleans recovered, Steve moved to New York City to run another restaurant closer to his family.

But he soon returned to New Orleans and leveraged his experience and determination to open New Orleans Cake Café & Bakery, located on the edge of the French Quarter. Today, the eatery serves delicious food to couples who can talk over a meal just steps from the artistic Frenchmen Street.

When Steve opened the spot, it was a wholesale bakery that was only open on the weekends. But he started catering to the locals who lived nearby in what he called a “no man’s land” at the time.

“It was a bad neighborhood at the time, but it was getting better,” he said.

A Local Favorite That Continues to Serve Fresh, Healthy Food

As the first new restaurant to open up in the Marigny district after Katrina, Steve’s initial focus was to provide the neighborhood with fresh, healthy food. The bakery quickly became an integral part of the neighborhood.

He said that neighbors would often come in and ask when he was going to provide wifi for customers, but then he noticed something: People who didn’t know each other often struck up conversations while sitting near each other. That’s when he decided the bakery wouldn’t get wifi.

During the first years in business, he said the café was a locals-only spot. But today, the restaurant’s clientele is about 75% tourists because the New Orleans Cake Café & Bakery is considered part of the French Quarter. Steve said that the nearby rental houses also make it more likely for tourists to discover his bakery.

Locals and tourists enjoy eating breakfast and lunch outside at the popular café and bakery.

Most New Orleans Cake Café & Bakery workers have been on the team for years — some for more than a decade.

“It’s really part of the neighborhood. We’ve all grown up together and grown up with our customers and their kids,” Steve said.
The establishment often welcomes the same families each weekend or the tourists who come numerous times during their stay. Steve said it also helps that he takes good care of his staff so that those team members want to take good care of the people who come to the restaurant for breakfast, lunch, or pastries.

As Mardi Gras season approaches, Steve and his team is swamped with orders for the café’s specialty King Cakes, which are a sweet tradition for the entire city. It is well-known for its apple goat cheese, raspberry cream cheese, and pecan cream cheese varieties.

A Perfect Setting for a Low-Key Romantic Moment

Steve said his staff often sees couples come to the eatery for dates, and many stop by for breakfast or lunch either as a first date or after a spirited night out.

“For a date, it works great. Through the years, we’ve seen the full cycle of relationships. We’ve seen people be engaged, married, and have kids,” he said. “It doesn’t get any more romantic than that. It’s really cute.” 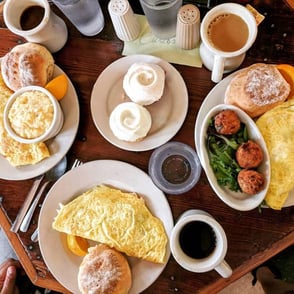 Couples enjoy the low-key — and low-pressure — experience that comes from a meal at New Orleans Cake Café & Bakery.

Along with not offering wifi, which often means people keep their phones in their pockets and hold livelier conversations, the café also doesn’t have any TVs or serve any alcohol.

“It is New Orleans, and you know you’re here,” Steve told us. “People come here because we serve really good food, and everything is fresh. For a good first date, it’s a cool place.”

According to Steve, there is something extra special about bringing a date to New Orleans Cake Café & Bakery. That’s because the sincere, down-home feel of the establishment is baked into everything it has on the menu.

“The general vibe of a bakery is loving,” he said. “It’s peaceful, and there isn’t the pressure of a fancy restaurant. It’s simple conversations and caring people behind the counter.”

One thing couples should know before they pull up a chair at New Orleans Cake Café & Bakery: Come hungry. Everything is delicious, and diners can add any cupcake to a meal for just $1.

The house breakfast specialties include plenty of New Orleans-style cuisine, including Boudin and Eggs, local Catfish and Eggs, and Shrimp and Grits. Steve is also famous for his Crab and Brie sandwich, which is served on homemade challah bread. 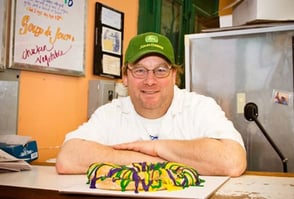 The eatery also has an extensive vegetarian menu, a nod to the city’s cosmopolitan culture. Vegetarians can order healthy grits, tofu scramble, or even an “Any Portabella in a Storm Omelet,” as well as many other items.

It also has a wide assortment of sandwiches, omelets, salads, and soups to satisfy everyone.

With advanced notice, Steve also delivers cakes within the New Orleans area. Recently, he received a call from a woman who wanted eight King Cakes to serve at her daughter’s Bat Mitzvah. Even though the delivery was across town, he was happy to be a part of her big day.

Steve said he takes pride in offering unique baked goods while so many other bakeries serve similar products. By offering something special, he can help make memories — especially for couples.

“That’s what I take away. When I lock the doors, I know we were part of the cycle of life,” he said. “I don’t think you can ask for any more than that. I’m not going to get rich off of this place. But I know we’ve become a part of someone’s life.”