The Scoop: Art may be subjective, but most people can still tell a bad piece when they see one. The proportions may be wrong, the colors may be entirely unnatural, or perhaps the subject of a portrait is missing hands or feet. Individuals, couples, and families can see all of these questionable artistic choices and more at the Museum Of Bad Art (MOBA). Due to the coronavirus pandemic, the museum’s hilarious collections are now available online for people to explore at home. For offering couples a unique date night experience with art so bad that it’s good, the Museum Of Bad Art has earned our Editors’ Choice Award.

Many couples today could use a little more happiness in their lives. So why not take a look at a portrait of Mary Todd Lincoln wearing a necklace of Christmas poinsettias? Or one of former President Barack Obama surrounded by photos of two other African-American presidents from movies and TV shows?

Couples can find both of these off-kilter portraits in the Dopplehangers section of the Museum Of Bad Art (MOBA). The museum specializes in giving a platform to art that wouldn’t come close to hanging in any other museum or gallery.

Louise Reilly Sacco, who goes by the tongue-in-cheek title of MOBA Permanent Acting Interim Executive Director, has been involved with the museum for the last 25 years. She suggests that the museum isn’t about making fun of the art or artists but rather about celebrating their unique points of view.

Couples can now browse The Museum Of Bad Art’s galleries online for a cultured date night at home.

“We celebrate art that we love and is fun, but wouldn’t get attention anywhere else. We never have anything mean to say about the art or the artist because we love these works,” said Louise.

Couples in quarantine don’t have to wait to visit. Since the museum was preparing to relocate before the COVID-19 pandemic, it had already moved its exhibits online. Now, partners can enjoy a virtual date while browsing through the museum’s cleverly labeled online collections.

After browsing the Dopplehangers exhibit, for instance, couples can move on to The Rainbow Collection, where paintings of blue, pink, or yellow people find a home.

Visitors should be sure to read the clever descriptions of the paintings, too, like the one for a painting called “Freedom Beach”:

“This hastily executed impressionist painting effectively reminds us that, even if only optional, clothing is advisable when practicing yoga on a tropical beach to avoid hatha sunburn.”

For giving couples a unique date night experience at home, the Museum Of Bad Art has earned our Editors’ Choice Award.

The Museum Celebrates 25 Years of Fun

The Museum Of Bad Art began out of pure luck. In the early 1990s, Louise’s brother was moving into a new place, and he wanted to display his collection of bad art. He’d collected many works from garage sales or thrift stores.

Instead of having a housewarming for his new place, he hung the works up on the walls, wrote descriptions of each piece that mimicked those you might find in galleries, and invited 50 of his friends. 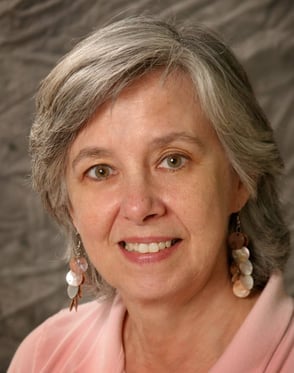 The mini-museum was more popular than anyone would have guessed. Those 50 friends invited their friends, so by the end of the night, more than 200 people were viewing the bad art.

“We decided we had to keep it going, but we had no idea it would last for 25 years!” Louise explains.

She is the only one of the founders who still works at the museum. Other staff members, including Curator-in-Chief Michael Frank, are volunteers.

So, where does the museum’s art come from?

Sometimes, the art is donated by bad art aficionados who find it or seek it out. Other times, the artists themselves donate their work.

Over the years, the museum has collected far more pieces than they could ever display. The museum is home to more than 500 works but only displays 25 to 30 pieces. That is one of the main reasons the team values the website. And even when the museum moves into its new physical space, the site will allow it to show more art.

The online space also allows staff to contribute more witty descriptions of the art. These descriptions aim to explain the art for viewers, and are meant to satirize the sometimes confusing descriptions of gallery paintings.

“The art raises questions and makes you think about what’s going on. Those are the same things that a traditional art museum might get going,” Louise said.

Couples who plan a date night to the virtual Museum Of Bad Art can spend an entire evening browsing the galleries and multimedia.

They can start with the Zoo collection and explore paintings like “Ferret in a Brothel” and “Non-Seeing Eye Dog.”

Next, they can make their way to the “In the Nood” gallery where they can see artists’ sometimes unfortunate likenesses of people in the buff. In this not-safe-for-work collection, they can enjoy paintings like “Chiquita” and “Amazons at Play.”

While the collections poke fun at art and artists, Louise reminds us these works are admirable.

“What we love about them is the artist’s heart and soul goes into it,” she said. 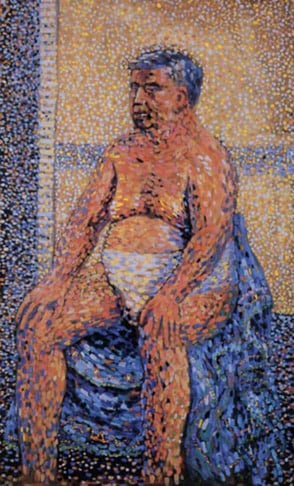 Sunday On The Pot With George by John Gedraitis, Acrylic on Canvas, is one of Louise’s favorites. (Photo Courtesy of the Museum Of Bad Art)

Louise recommends checking out one of her favorites, “Sunday on the Pot with George.” Inspired by the famous pointillism painting “A Sunday Afternoon on the Island of La Grande Jatte” by Georges Seurat, this imitation painting is anything but scenic. Instead, artist John Gedraitis painted a picture of an overweight man in his underwear sitting on a toilet.

“It’s stunning someone would put that much effort into painting this guy,” Louise said with a laugh.

She also said that many artists can’t paint hands and feet, so they avoid them altogether.

“There are things we see over and over again like that. Gedraitis didn’t want to face the challenge of painting feet — they just disappear off the canvas,” she said.

Once visitors finish exploring the collections, they can watch curator Michael Frank talk about some of the museum’s noteworthy pieces on YouTube. So far, he’s talked about eight of the museum’s pieces, including “Too Fat People.”

“It’s a good collection, and it’s especially interesting for someone who knows something about art. They’re bringing out works they know and works that our artists have been inspired to do,” Louise said.

MOBA Future Goals is to Continue Expanding Its Reach Online

Louise is surprised that what started as an art-viewing party for friends turned into a decades-long project. At the same time, she understands the museum’s appeal.

“When we were laughing and talking about this idea 25 years ago, we wondered, ‘Is this just us?’ But think if you’re walking past a gallery and someone points something out to you. You don’t know if it’s going to be really bad or really good. We decided we’d be the ones to share that impulse,” Louise said.

The museum has found fans both locally in Massachusetts and around the world. Recently, it curated international shows in Taiwan and Tokyo. A third show in Quebec is still in the works.

Further, the museum was a popular date spot in Somerville, its previous home.

“We’d get a lot of college students and tourists, the kind of people who look in Atlas Obscura to figure out what to visit,” said Louise.

But now that so many folks can’t visit galleries or museums in person, it is attracting an even wider following. Michael Frank recently started a series of live video lectures about collecting and has given themed talks.

“He likes to compare what we have in our museum with the traditional works that may have inspired the artist. Like the “Mana Lisa” was inspired by the “Mona Lisa,” said Louise.

The Museum Of Bad Art can bring some much-needed humor into the homes of couples. And for those looking to shake up their typical stay-at-home routine, there’s no better way than to spend a night on its website.

“What we hear from people is that they’re glad they discovered MOBA. It gives them something to smile and talk about during these hard times. Besides, if you’re looking at the art with someone who doesn’t get it, run the other way,” Louise said with a laugh.