The Scoop: Many couples attempting to get pregnant understand how challenging the process can be. Doctor visits often end with encouragement to keep trying, even though they don’t know what’s not working. That’s where Mira can help. The fertility tracking system, which helps women understand their menstrual cycles and hormone levels to determine when to conceive, was designed by a woman with a background in biomedical engineering. Mira can also help women who want to avoid pregnancy and women entering menopause.

It’s heartbreaking when couples realize that getting pregnant isn’t as easy as they thought it would be. For most couples trying to conceive, the odds that a woman will become pregnant are 15% to 25% in any particular month. But about 10% of women in America have a difficult time getting pregnant and bringing a baby to term.

Pregnancy is a complicated process. A woman’s body needs to release an egg through ovulation, and the egg then must make its way down from the ovaries to her uterus. Sperm then fertilizes the egg, and the egg needs to attach and implant itself to the uterus.

If any one of those steps doesn’t take place on schedule, pregnancy doesn’t occur. The inability to get pregnant has something to do with the woman’s body about a third of the time, according to the Centers for Disease Control and Prevention. Another third of the time, the issue is with the man, while the remaining cases may indicate a problem with both partners or the result of an unknown problem.

Sylvia Kang developed Mira, a fertility tracking system that helps women understand their ovulation cycles and windows for conception, to provide some clarity about where the problem may lie. She said she wanted to give the control back to couples instead of them having to spend more time at the doctor’s office trying to figure out what is going on.

Couples trying to conceive have a small window in which to do so. Once an egg is released from an ovary, it will die or dissolve within 12 to 24 hours if it’s not fertilized. Mira can teach couples about their bodies and cycles to identify that window.

“I feel good about what we’re doing,” said Sylvia, who is also Mira’s CEO. “This journey is very stressful. If you don’t experience it, you don’t know how hard it is. Each month, you’re just waiting for the results when you test for pregnancy. The worst thing is you don’t know what is going on. You believe you are doing the right thing, but get no results.”

A System Designed With Couples and Conception in Mind

Sylvia has an MBA from Cornell University and a Master’s degree in biomedical engineering from Columbia University. She said she started working on Mira after seeing so many of her educated, professional friends struggle with conception. Many of them waited until their 30s to try to conceive a baby and found plenty of confusion along the way.

Some of her friends also turned to in vitro fertilization, which can cost $10,000 or more. When it doesn’t work, it can be a crushing disappointment. The process can also be frustrating because it’s not always clear why couples aren’t getting pregnant.

“I thought we could bring accurate, hospital-grade testing into the comfort of couples’ homes,” Sylvia said. “We can help women understand their bodies, so if they want to conceive, they’ll know what to do. They’ll know if they should have sex, relax, or adjust their lifestyle to make it happen.”

Sylvia said she found a partner with a technical background and a Ph.D. in physics, and together they created an algorithm and a simple data interpretation method to make it easy for women to take control of their conception process.

The Mira Fertility tracker isn’t just for couples looking to conceive. She said that many women want to get a better understanding of their irregular menstrual cycles or address hormone imbalances.

Other users are just starting to enter menopause and need additional information to better cope with natural changes.

Fertility Tracker Takes Out the Guesswork

Customers who sign up for Mira receive three components. The first is a series of wands used to obtain urine samples. The second is the Mira Analyzer, which reads the information. Finally, users download an app — on iOS or Android — to store and interpret their data so they can look for trends and glean valuable information about their cycles.

Unlike other fertility tracking systems that simply generate a positive or negative result, Mira measures actual hormone concentrations — which provides personalized fertility insights on when precisely a woman should try to conceive. It’s the same process hospitals use when analyzing blood work, just a lot easier. 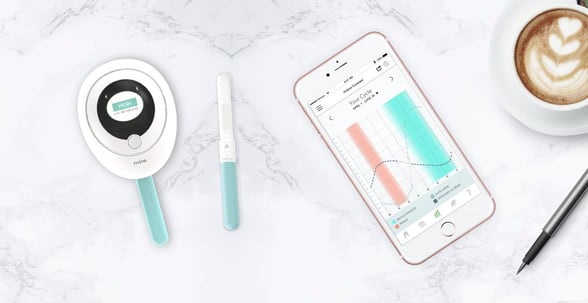 The Mira Fertility tracker and app allow women to identify the precise window for conception.

“This number automatically transfers to your app. Then you can see your numbers and your own curve, because, most likely, you will be testing 10 to 15 times per cycle,” Sylvia said. “You will see your pattern and when your hormones start to increase. That will be your fertile window.”

With that data, users can also see how one cycle varies from another. That helps them better understand ovulation and hormone patterns over time, taking some guesswork out of the journey. There also may be less anxiety when they don’t get pregnant if they know it’s been a week since ovulation.

Simple information stops the painful “What’s wrong with me?” questions that arise when women mistakenly think their ovulation occurred on a different day.

“On the internet, there is a lot of confusing information, too,” Sylvia added. “There are many personal stories, but it’s not you, so how do you know that their story would apply to you? It is a long process.”

Mira Empowers Women With Information About Their Bodies

Sylvia said Mira has worked for women with a range of hormone cycles, and many of them have given excellent feedback about the product.

One woman said she knew that both she and her husband had some infertility problems to address, but they both were ready to have a child together. By using the tracking system, she said she gained a better understanding of her irregular ovulation pattern. She also recognized that her elevated hormone baseline could sometimes result in a false positive for ovulation.

“She got to know her body much better, and that’s how she got pregnant naturally,” Sylvia said. “We try to help women achieve their conception goals. We want to help them to get a much better idea of what’s going on, and that will give them control and confidence.”

Women can take the information they glean from Mira to their doctors to discuss specific treatments or lifestyle adjustments that can improve their chances of pregnancy.

Sylvia said she plans for Mira to be a one-stop shop to empower women with information about their bodies. Soon, the company will launch an estrogen test as part of its process to provide a complete fertility and infertility window.

The goal is to have multiple tests that can be interpreted with a single analyzer. Those analyses would then be run through an Artificial Intelligence (AI) technology that learns from the data each month.

That way, women can understand when it’s a good time for IVF, whether the drugs are helping with a specific condition or the state of their menopause.

“We are empowering women. They have the confidence, the data, and, now, the control. That’s exactly what women need when they are making important life decisions,” Sylvia said.