The Scoop: Meteora, Greece, is home to some of the most stunning views and captivating rock formations in the world. Its dramatic cliffs also feature numerous 14th century monasteries, where monks and nuns gathered to get away from the world. Couples who want to visit some of Greece’s most famous locations can book a three- or four-day trip to Meteora. During that time, they can see some breathtaking landscapes, learn more about the unique Christian history of the area, and taste plenty of Greek specialty dishes. For providing couples with a romantic and historical getaway, Meteora, Greece, has earned our Editors’ Choice Award.

In the 14th century, early Christians discovered that the dramatic cliffs of the Meteora region of central Greece were the perfect backdrop for solitude and quiet contemplation. The immense rock formations arise from the Pindus Mountains of the western Thessaly region of the country.

So, they erected monasteries on top of some of those stone formations. Monks of the Byzantium period found that isolation helped them attain their spiritual goals.

According to Visit Meteora, the region’s tourism arm: “They chose to do this not because it was easy but because it was hard, almost impossible. And they succeeded in this great achievement to build them through their great faith.”

The monks were quite successful in their quest, building 24 monasteries on the cliffs of Meteora. Today, six of those monasteries are Meteora’s primary tourist attractions. 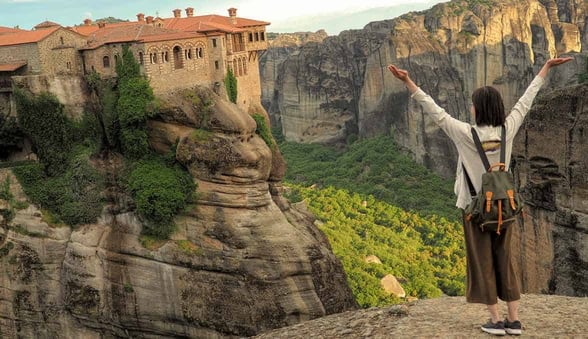 Meteora, Greece, is famous for its stunning landscapes and cliffside monasteries.

Others come to see the region’s archeological wonders, including the caves where monks lived in complete seclusion. The Cave of Theopetra, for instance, is home to the oldest human-made structure on earth.

George Kourelis, Sales and Marketing Manager for Visit Meteora, told us that couples find plenty to do in the region, even as part of a short stay on an extended Grecian vacation. Visit Meteora offers creative tours that take couples to notable sites and provides them with opportunities to sample Greek delicacies.

“This is one of the most breathtaking landscapes you can find in Europe. It’s a unique area, as it’s a combination of a geological phenomenon,” George said.

Hikes and Nature Excursions Get Partners Off the Beaten Path

When visiting the region, most couples opt for the Meteora hiking tour, a four-and-half hour tour that takes them to some of the area’s most notable sites. Memorable parts of the tour include a visit to the Ypapanti Monastery, which is built into the side of a rock.

Visitors can also experience the forests of Meteora, where they’ll get away from the crowds and see the ruins of the Pantokrator monastery, along with the monasteries of Great Meteoron or Varlaam.

“The hermit caves are something to see. Hermit monks were present here, and we take small groups of people and show them around this area,” George tells us. 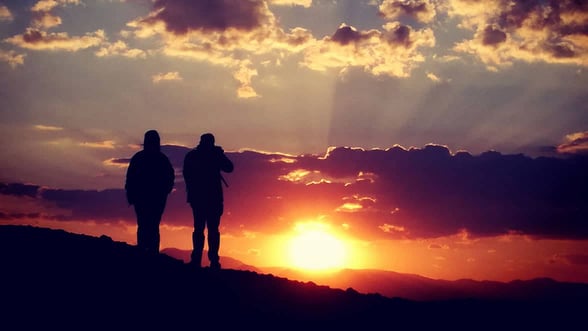 Couples can enjoy incredible sunsets together in the region.

Informative tour guides tell stories and legends that people wouldn’t otherwise hear and take them to places well off the beaten path. For example, they’ll visit a trail used by monks for centuries before a road was constructed.

“We know the area. Tourists come to the main attractions, but there are so many hidden gems. Hidden monasteries and caves, hidden viewpoints with beautiful views,” George said.

But couples need some stamina as the hikes can be considerable excursions.

For those not up for hiking, Meteora offers more casual options, including the Half-Day Sightseeing Tour. Instead of walking around Meteora on a hike, couples can ride with other participants on a bus to see all of the region’s monasteries on a four-hour tour. The groups visit three monasteries and learn the history of the area from a knowledgeable guide.

George recommends the sunset tour or the food and wine tour as romantic excursions for couples.

The sunset tour takes visitors to the perfect spot to experience the end of a day in Meteora. Before sunset, participants will see all six monasteries, as well as stopping in at the Byzantine church of the Virgin Mary and the Hermitages of St. Nicholas Badova. The tour includes a few short walks to visit panoramic vistas and take in scenic views. And as the sun is setting, guests are taken to the perfect spot to see the remarkable colors.

“We also share local history and monastic history on the tour. And we describe how they managed to build those monasteries,” said George.

The food and wine tour is the ultimate opportunity for foodies or lovers of Greek cuisine. Guests can choose a private experience with a partner or take the tour with a group of friends. The tour begins in the town of Kalambaka and takes participants to the villages of the region, many of which have open-air fruit stands.

During the tour, visitors sample wine from five local wineries and regional specialties, including Soutzouki, a dish made with unfermented grape juice and nuts. They’ll also try local pies, cheese, sausages, and meat. The six-hour tour also takes them to the Natural History Museum, where they can sample mushrooms.

“I always recommend this tour for couples. It’s romantic. We drive around in a vehicle, take short walks, and stop at the most beautiful viewpoints,” George said.

George and the Visit Meteora team said they aim to make a trip to the region as easy as possible for couples. After seven years in operation, the organization knows exactly what it takes to plan a hassle-free trip.

For instance, tour guides can pick up couples at the train station when they arrive and drive them to their hotels. And most tours also pick up and drop off couples at their lodging.

Many couples also decide to combine tours so they can experience everything the region has to offer. For instance, some choose a package with a hiking tour one day, and the food and wine tour the next. Others prefer to keep their tours private, which the company can also arrange.

“If a couple would like to come here to have a memorable experience, I would recommend a sunset tour, a hiking tour, and a food and wine tour over two or three days. This is the way to avoid what the mass tourists are doing,” George said.

The region’s interesting history and natural beauty offer a scenic backdrop to reconnect with a partner. George shared the story of a man who came to Meteora for a hiking tour and loved it so much that he came back with his girlfriend a few months later, and he ended up proposing to her.

Ultimately, though, the team at Visit Meteora just wants to share the home region’s beauty with others.

“We’ll share Meteora in the way only we could do it. We’ve known these places since we were teenagers. We grew up here, and it was easy for us to create the itinerary,” George said.