The Scoop: When you question whether your significant other is cheating, a simple denial may not suffice. Sometimes, you can’t move past those feelings until you find out for sure. Lie Detectors UK has helped thousands of people from all over the world find out the truth through polygraph tests that can identify lies about infidelities. The test can also prove the innocence of those who’ve been faithful. In a matter of hours, couples can move on — one way or another — assisted by a scientifically accurate method.

In the United States, the idea of taking a polygraph test to determine whether a partner is cheating may bring back memories of daytime talk shows. However, in the United Kingdom, it’s a common and trusted way to identify the truth about infidelities.

“Only 10% of an examiner’s work in the U.S. is infidelity based, but it’s 70% in the U.K., so it is a vastly different market,” said Jason Hubble, the Founder of Lie Detectors UK, one of the country’s leading lie detection services. “When we meet with our U.S. counterparts, they are amazed at the infidelity work that we do. It hasn’t quite taken off yet in the U.S. as it is here.”

But the service is trending, and Jason’s team is busy with 10 to 15 infidelity tests a week. That’s because so many couples are searching for answers in their relationships.

“I had an older couple, and the wife noticed that he was starting to wear aftershave, look after himself, and get fit, and she asked herself, ‘Why? And for who?'” Jason said. 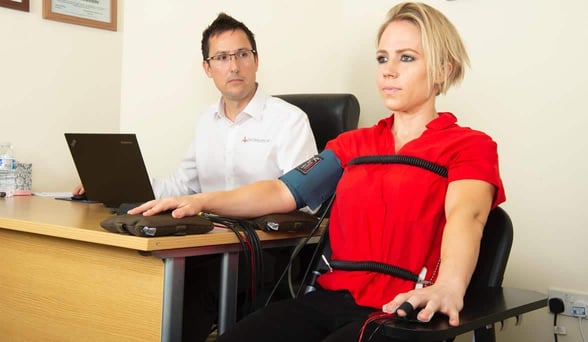 Lie Detectors UK uses polygraph tests to help people get to the truth.

As it turned out, his change in behavior was a positive response to a mid-life crisis and had nothing to do with an affair.

“Other guys may buy a fancy sports car, but he decided to smarten himself up. But to her, that was him potentially cheating. Then, when he passed his polygraph, she felt like a fool,” Jason said. “We said, ‘You’re not a fool. You can move on.’ And they did. A partner polygraph is for people who love each other. If there’s no love in the relationship, they’ll split up.”

Some may think that, if you need a polygraph test, there’s no trust in the relationship and it’s not worth it. However, Jason and his team have seen countless couples in those situations and understand that isn’t the case.

The Company’s Polygraph Test Process is Based on International Standards

Of course, many people try to cheat. Jason estimates that about 1 in 10 try — and fail.

“They read on the internet about basic breathing exercises and try to tense up to change their blood pressure. They always get it wrong. And it’s lovely when they do because it takes my accuracy levels from 95% to 100%,” he told us. “Their body responds when we ask them the questions. Your body responds involuntarily. That’s what we’re in tune with and what we’re looking for.”

According to a study published in Crime Psychology Review, the polygraph is one of the most effective ways to determine whether someone is telling the truth. Jason bases his work on regulations and best practices created by the U.S Polygraph Association, which oversees the industry. Jason has to train regularly, learning new techniques.

“I need to retrain every two years to be current. There is a regulation about the time of an examination, with 90 minutes being the minimum. Otherwise, it might be rushed,” he said. “With infidelity, where you’re coming in with your partner, it could take three to four hours.

Lie Detectors UK has earned recognition as one of the best polygraph testing companies in the U.K.

Examiners begin the sessions by talking with couples, a process they repeat once a polygraph is done. The examiners answer any questions the participants may have and explain the accuracy of the techniques. That thorough process is part of the reason that Lie Detectors UK was named the best polygraph testing company in the U.K. in 2019.

“We know how accurate some techniques are, and the regulations ensure that we use the most effective ones,” he said.

Only 2,800 examiners are a part of polygraph associations worldwide, Jason said. And, if any concerns arise about a polygraph result, the association sends an investigator to review the methods and data.

“They do great things for our industry,” Jason said. “When someone says that they don’t believe polygraph, that it doesn’t work, you can turn around and give them the stats. It works brilliantly if you do it right, which means following the regulations of the U.S. Polygraph Association — which is what we do. ”

The Catchall Test is Popular With Doubting Partners

Jason created what he calls a “catchall” test to determine if a partner is cheating. He said it was necessary as situations in the world of mobile communication become more common. For example, when a partner is acting strange with his or her mobile phone — always putting it face down or constantly turning it off — the other partner may get suspicious. 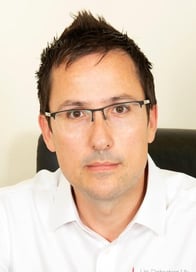 Founder Jason Hubble told us about the questions he uses to unearth lies.

“Regarding emotion, a lot of people come in and say that they want me to test to see if their partner really loves me,” he said. “I tell them, ‘I can do it if you can tell me what love is because I don’t know what love is. Is it the feeling that makes your stomach go funny? If I can’t define it, we’ll never know.”

And while a polygraph can’t pinpoint love, the catchall test has become one of the most popular methods for testing fidelity.

“We call it a catchall because it’s sexual intercourse, sexual contact, and sexual activity. It’s not someone giving you a hug, shaking your hand or kissing you on the cheek, but it is something of a sexual nature that is reciprocated, and both people are aroused,” Jason said. “We don’t want someone to fail because they had a dance, not a strip dance but one where the partner was there, with someone and they enjoyed it. It’s not that. It’s fair, and it’s accurate.”

Lie Detectors UK: Jason Hubble and His Team Lead People to the Truth

Polygraphs are an effective and common way for couples in the U.K. to reveal the truth in their relationships, and Jason said he enjoys breaking down the barriers of lies — or unfounded suspicions — that can trap couples in a cycle of distrust.

After each test, it takes about 20 minutes to get results back, and Jason shares the news with the couple right away. He also emails them a three-page report.

Usually, when someone fails a test, they admit to the lie. Jason said women usually come clean immediately, while men tend to admit to minor mistakes upfront and admit to everything later.

“No matter what, you’ll get closure and can move on and be happy in life,” Jason said. “We want people to be happy, support each other, and feel confident in their relationships. Trust takes years to earn and minutes to lose, but a polygraph test helps to start building it back in a relationship.”