The Scoop: Levitt Pavilion Denver opened in 2017 to offer individuals, couples, and families free live music during the warmer months. It hosts about 50 concerts annually and drew a large following of fans and artists during its first three years. In 2020, the COVID-19 pandemic put a wrench in plans for large gatherings, but Levitt Pavilion Denver got creative and started offering live virtual concerts each week. The amphitheater also plans to begin hosting smaller, socially distanced shows from its loading dock where people can spread out comfortably. For offering couples virtual — and live — entertainment options for dates, Levitt Pavilion Denver earns our Editors’ Choice Award.

Music-loving couples are missing live concerts during the age of quarantines and social distancing. That’s why one popular live music venue, Levitt Pavilion Denver, moved its shows online during the thick of its summer season.

“We reached back out to our network of artists who want to support us and help us keep our name out there. Our artists have great fan bases and have worked hard to build a name for themselves, too,” said Andy Thomas, Levitt Pavilion Denver’s Associate Director. 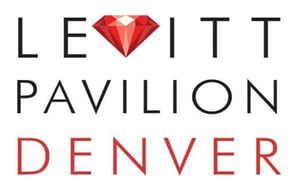 Levitt Pavilion Denver offers entertainment for couples, even during the age of social distancing.

But Levitt Pavilion Denver’s artistic connections aren’t all local. The pavilion also brought in Zion I, a hip-hop artist from Oakland, California, to perform his unique music influenced by politics, social justice, family, and spirituality.

Levitt Pavilion Denver was years in the making before it opened in 2017.

Ruby Hill Park, where the amphitheater is located, had long been identified as a spot for redevelopment. While the park is Denver’s third largest, it was underused. People headed to the park for sledding but not much else. In fact, Andy said he had forgotten the park existed, and he’s lived in Denver his whole life.

“The whole area wasn’t highly regarded, so a team came up with the Ruby Hill master plan. It was a way to help people use the park more positively,” Andy said.

The team identified necessary improvements, including better lighting, improved roads, a bike skills course, and an amphitheater in the park’s natural grass bowl. It turns out the team had a natural partner in the Levitt Foundation, which had already developed six amphitheaters to host free concerts in other cities, including Los Angeles, California, and Sioux Falls, South Dakota. 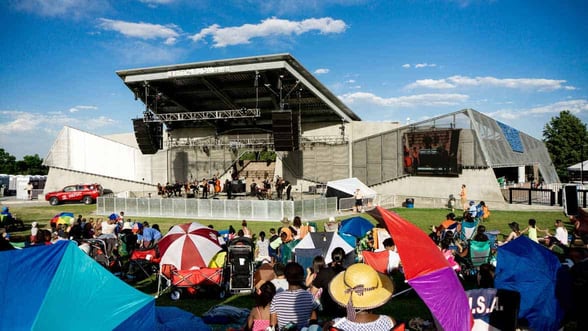 Couples can soon spread out and watch a live show at the Levitt Pavilion Denver backstage.

The Levitt Foundation develops concert venues and programming for communities that are often culturally underserved and lack free access to entertainment. The foundation has become the largest provider of free, family-friendly entertainment in the country.

“We provide entertainment to communities that wouldn’t otherwise have it,” said Andy.

In 2017, Levitt Pavilion Denver hosted its first season of free concerts for the public. That year, the foundation held 30 concerts, boosting that number to 50 annually in 2018 and 2019.

“We’ve accomplished our goal of building community and providing free concerts to people who couldn’t afford it,” Andy said.

Levitt Pavilion Denver has continued to serve that mission during the summer of 2020 through its Facebook Live series called Levitt in Your Living Room. The pavilion plans to grow the audience of those concerts throughout the summer and fall, too. It partnered with a local TV affiliate and has a newscaster introducing it and sharing it on its page.

And the venue wants to keep hosting the streaming concerts, even when the COVID-19 pandemic eases, and people can congregate in person again.

“It’s been fun and well-received, and we want to keep doing it, whatever happens,” Andy told us.

As Denver lifts restrictions on gatherings, Levitt Pavilion Denver has also devised a creative plan to host live concerts during the late summer and fall. It aims to use its back loading dock for smaller shows with crowds of 175 people or fewer so they can easily socially distance.

“The main bowl is too spread out, so it would be awkward for people to perform to such a small crowd. It also takes a lot of resources to get the front of the house going, so we’re going to focus on doing these outdoor, backlot concerts,” Andy said.

Though the venue will have a much smaller crowd than the bowl concerts of previous summers, those more intimate offerings will still provide what the Levitt Pavilion Denver is known for: free shows supporting local communities and artists.

Currently, the Levitt Pavilion Denver has 12 free music concerts on the books with local artists. It also plans to expand the scope of offerings to comedy shows and storytelling events. Additionally, performance and theater companies will be invited to put on shows in the modified venue.

Couples can choose to watch Levitt in Your Living Room or participate in one of the venue’s upcoming smaller concerts. Either way, the Levitt Pavilion Denver staff calls the experience “Denver’s best date night.”

At home, couples can take a laptop into their backyard, pack a picnic dinner, and mix some cocktails. Sitting on a blanket or in lawn chairs outside would mimic the Levitt experience well.

“As we are figuring out what live music will look like in the future, these concerts keep the thought of experiencing live music in your mindset,” Andy said.

If couples decide to attend one of the smaller, in-person events, they can feel safe with all the protocols the venue will have in place.

“We’re still under the stars, and everyone could use a free date at this point. You can watch an artist you haven’t heard of, and it’s a nice way to hear new music,” Andy tells us.

Those waiting for the next in-person or live-streaming show can also support other local Denver concert venues facing financial hardship because of the months-long quarantine shutdown. The Levitt Pavilion Denver participates in the National Independent Venue Association (NIVA)’s #SaveOurStages project. The project encourages people to contact their legislators to ask them for funding to keep shuttered concert venues open through the pandemic.

Couples can also follow Levitt Pavilion Denver on social media to stay updated about upcoming virtual concerts and the status of in-person shows.