The Scoop: For more than 40 years, the Delgado family has run the popular Las Casuelas Terraza restaurant in Palm Springs, California. During that time, they’ve focused on serving hearty and tasty cuisine from recipes that originated in Mazatlán, Mexico. The memorable decor and delicious food make Las Casuelas Terraza a lively date spot, and many couples frequently return to enjoy their favorite dishes, including burritos, tacos, and guacamole made from recipes that originated with the Delgado family matriarch, Maria. For its authentic food and lively date-night atmosphere, Las Casuelas Terraza has earned our Editors’ Choice Award.

Maria Fajardo was a single mother who cooked hearty, homestyle meals for miners in the Arizona desert before the Great Depression. She often baked meals in cazuelas — earthenware clay cooking pots glazed inside but unglazed on the bottom.

“She used family recipes from the Mazatlán, Mexico, region, but, mostly, her cooking was dictated by what would fill up the miners every day. It was about getting the love back into those working men,” said Patrick Service, Maria’s great-grandson. 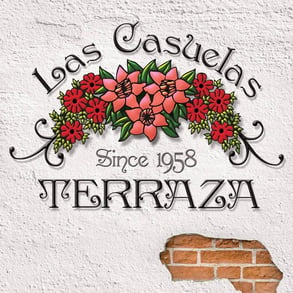 Las Casuelas Terraza was founded in 1958 and has been at its current location in Palm Springs, California, since 1979.

Some of Maria’s recipes included filling meals like Chile Colorado, Pork Chile Verde, refried beans, and red enchiladas. She also made portable lunches, like tacos with guacamole and salsa, for the miners.

Those meals led Maria to even more success. Though she was a single woman in the early 20th century, she set up a café, but her regionally famous recipes inspired another establishment that remains popular today. When Maria’s son Florencio Delgado and his wife, also named Maria, moved to Palm Springs, California, in 1958, They opened up the Original Las Casuelas Terraza, the cafe that started the valley-wide family of restaurants.

“Our family made it into a place that felt romantic and appealed to the idea of beauty. Even the lighting was designed in a way that was flattering and made you feel comfortable,” said Patrick, who now runs Las Casuelas Terraza.

Patrick is part of the fourth generation of the Delgado family to operate one of the family restaurants, and it’s still one of the most popular eateries in Palm Springs for couples, tourists, and notable figures.

“My parents grew it, and here we are now,” Patrick said. 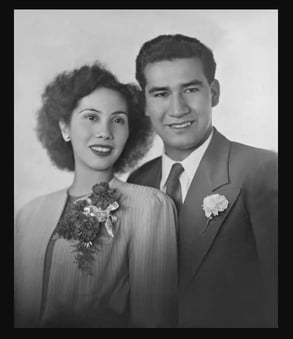 When it opened, the restaurant itself was a nod to history, as it was housed in a remodeled casita from the 1920s. In fact, its decor was so authentic that a group asked if it could add the restaurant to its historical tour.

“A few months in, they asked if they could add Las Casuelas to the tour, (even though it) was a completely new place,” Patrick told us.

From the beginning, Las Casuelas Terraza has been about honoring the recipes and traditions of Maria Fajardo. She wanted to create food that made miners in the desert feel taken care of, and that remains the restaurant’s mission.

“We’re still about fostering an environment focused on love and relationships,” said Patrick.

Perhaps that’s why so many people say they have developed a true relationship with Las Casuelas over the years, and many of those happy couples still come to visit the restaurant 20, 30, or even 40 years after they had their first dates there.

Recently, Patrick said, a man came to the restaurant wanting to buy table 23 — yes, the actual table. That was the spot where he’d had his first date with his soon-to-be-wife. While the table they’d eaten at was replaced in the 1990s, much of the decor and many of the menu items remain the same as they were when they had their first date.

Plenty of diners have established Las Casuelas Terraza as a family tradition. Grandparents often bring their grandchildren to eat the same dishes they enjoyed as children.

“We see all sorts of love stories here — both romantic and family,” Patrick said.

Las Caseulas Terraza doesn’t like to mess with the classics. Since the restaurant opened in the 1950s, it has served many of the same recipes that Maria Fajardo served to miners in the 1920s.

“We still have the same cuisine and vision my great-grandmother had,” said Patrick.

He said the restaurant’s most popular offerings are still from his great-grandmother’s recipes. Many diners prefer the Combinaciones Plates, which include a sampling of different foods. The Combinación Número Uno plate, for example, includes Chile Relleno (mild green chiles served with ranchero sauce), cheese enchiladas, and a ground beef tostada. The Combinación De Pollo plate comes with a chicken tostada, a chicken tamale, and a Chicken Enchilada.

Patrick would also recommend ordering the Mar y Tierra (Sea and Land) plate on a date. The shared plate includes a cut of Angus ribeye steak and four prawns.

“The meat offering is carne asada, which means something different than most people think. Traditionally, it was a better cut of meat than you find at most restaurants,” said Patrick.

“Our food is never too spicy, and it’s very filling. With our fresh recipes, it’s actually really healthy, and we make everything in house. It’s all real food,” Patrick told us.

If diners want to indulge their sweet tooth, the eatery has many options. Desserts include empanadas filled with apples and nuts, and topped with cinnamon sugar, honey, vanilla ice cream, and whipped cream. For lighter post-dinner fare, couples can enjoy a Mexican hot chocolate with whipped cream, nuts, and cinnamon.

With its roots stretching back to before the Great Depression, Las Casuelas Terraza takes people back in time with its traditional Mexican atmosphere and authentic foods, and couples can have a new experience each time they visit.

One popular experience is sitting on the Terraza, or terrace, which features a fountain and fresh flowers. For a more intimate experience, couples can sit outside on the Cantina sidewalk patio.

For livelier date nights, couples often sit on the Palapa patio, which includes an outdoor bar, a stage, and a dance floor. Each night, the Palapa hosts bands, and couples are encouraged to get out of their seats and dance. Couples also enjoy sampling the restaurant’s collection of more than 100 tequilas.

Couples can enjoy an intimate meal or dance to live music at Las Casuelas Terraza.

The different dining experiences demonstrate how Las Casuelas Terraza stays true to the heritage that Maria Fajardo set out to build for her family while also adding some modern touches. Ultimately, the restaurant wants to build a bridge between the past and the present.

“We want to stand out in our guests’ minds. We want them to remember their moments here and provide whatever it is that they want,” Patrick said.