The Scoop: If you’re struggling to relax or sleep at night, you’re not alone. An estimated 50 to 70 million Americans struggle with insomnia, including the co-founder of Kokoon, who discovered that certain sounds helped him fall asleep. So he helped create the comfortable Kokoon noise-canceling headphones to connect individuals and couples with soothing audio and sleep-tracking sensors. After seven years of research and development, Kokoon is ready to ship its headphones to anyone suffering from restless nights. Kokoon is also offering DatingNews.com readers 10% off singles and couples headphones if they use the code datingnews10.

People often need the right conditions to drift off into a peaceful night’s sleep, which is why between 50 and 70 million Americans struggle with insomnia. It’s also not easy to get into that restful mindset if you share a bed with a partner or spouse.

That’s a problem Kokoon set out to solve with its high-tech noise-canceling headphones. The comfortable, lightweight headphones aim to put users into their own private space no matter where they are. That much-needed time to de-stress can make it easier for them to fall asleep and be ready to tackle whatever challenges await the next day.

Ishan Wijewardana, Kokoon’s Business Strategy and Operations Manager, told us about one user who found the headphones useful in a time of pressing need. When the man’s wife was sick with a long-term illness, the Kokoon headphones allowed him to get a good night’s sleep. Well-rested, he could better care for his wife and their young child the next day.

In a testimonial, the man wrote: “Since my wife’s sickness, your headphones have assisted me in getting enough sleep to support her while raising our 3-year-old.”

“The headphones provided him with that safe place for a few hours. Listening to the audio and music gave him that time to switch off and recharge. A clear head helped him become the best partner and dad he could be,” Ishan said.

Others purchase Kokoon headphones to create a quiet environment for themselves — and their partners — each night.

“We sell a couples package when it comes to our headphones. If one of the partners snores, it helps both of the couples get a good sleep and relax better,” Ishan said.

Most customers buy Kokoon headphones for sleep, but others wear them throughout the day to unwind from stressors in their lives. The headphones are unobtrusive enough that they don’t look out of place on the sidewalk or a train and are comfortable enough to wear all day.

Noise-canceling technology is relatively common, but Kokoon headphones offer a much different experience. Using data collected by EG brainwave sensors in the headphones, the product adapts to the user. Once users fall asleep, Kokoon uses bodily cues to turn down the audio automatically. Eventually, the headphones can collect enough information to recommend audio content that lulls users to their most relaxed state.

For those who have tried — and failed — to sleep with headphones on, Kokoon offers a superior level of comfort. The over-ear design is made from silicone that molds to the user’s head and ears, and sensors are soft and unobtrusive.

To create such a high-tech, comfortable product, the Kokoon team worked for three years to develop a useful product, eventually rolling out a version that satisfied their expectations.

The company was founded by Tim Antos and Richard Hall, two mechanical engineers. Tim came up with an idea after his stressful job kept him awake at night.

“He was so stressed that he found it hard to zone out enough to go to sleep. He tried medications, earplugs, pillows, and new mattresses, but nothing worked,” Ishan said.

Eventually, Tim discovered that relaxing audio helped him fall asleep, and he thought that the method could work for others. So he partnered with his friend Richard, and together they decided to develop over-the-head headphones that users could wear to bed.

Kokoon rolled out several successful crowdfunding campaigns with the mission of developing a suitable product. And recently, the perfected Kokoon headphones began shipping out.

The headphones cancel out any noises users might hear at night through active noise cancellation and isolation features. The app can also sense when users start to fall asleep and can play white noise that continues to drown out outside sounds.

Kokoon does much more than play white noise, though. The app — available on Android and iOS — also offers different types of content that can help people sleep. One category is Sleep Aids, which suggests different relaxation strategies, including gentle breathing or resting awareness. The app also plays crackling fire, beach waves, and other sounds from the outdoors. 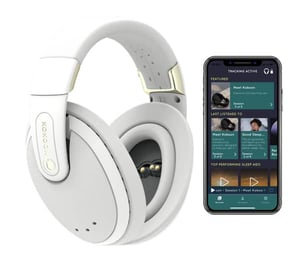 The app also provides information about the duration and quality of sleep, including how much of it was deep or REM sleep. Further, the app uses the data to recommend content that’s likely to produce the same results.

People need anywhere from six to 10 hours of sleep to function well. Though the number varies, most require seven or eight hours of sleep every night. However, that sleep must be quality, restful sleep — not just time spent with the lights off under the covers.

Improved sleep isn’t just for making people feel better the next day. It has significant long-term health consequences, as well. Better sleep has cardiovascular benefits, helps boost creativity, and even lowers the risk of depression.

“We know that sleep is key for someone to maintain their health. If people sleep consistently, it leads to better outcomes for their heart, lungs, and immunity,” Ishan said.

Missing out on sleep also has negative consequences.

“Not having that recommended daily amount of sleep affects you in the long term. It reduces your memory and makes you more susceptible to viruses and bacterial infections,” Ishan said.

After years of developing Kokoon and ensuring the product works well, Kokoon is starting to ship its headphones to users around the world. The small team of eight also wants to continue hearing from users about what they like and what they need.

“The closer we are to the customers, the more we can ask them what they want us to create,” he notes.

What’s next for Kokoon?

The first step is improving the data-analysis capabilities of the headphones. Right now, the company can monitor the type of audio that helps people sleep and relax better. It can use that information to recommend the types of audio content that will promote comfort.

“We want to improve our capability to capture data from the headphones,” Ishan said.

In turn, the company wants to offer more content on the app, something that customers are requesting. Additionally, Kokoon aims to develop an in-ear headphone version that users can wear even more discreetly when they’re out and about.

“Some customers try to wear the over-ear headphones, but they prefer something more discreet,” Ishan told us.

Over the last seven years, Kokoon has worked tirelessly to create a product and app that work well for users. Now, after several crowdfunding campaigns, the company is ready to share the final product with the world. Couples can use them to have a little space of their own — even when they’re together.

“We want to help the world sleep and relax more easily,” Ishan said.