The Scoop: People who want to know if they are at high risk for passing on a genetic disease can get tested in advance of having children. JScreen offers affordable, at-home testing for singles and couples who want to empower themselves with accurate family planning tools. It can be highly beneficial for people to find out their risks well before they conceive, especially if they are from a higher-risk community.

Some people are at a higher risk than others for passing on genetic diseases to their children. The best way for singles and couples to know their risk is to get tested before planning to start a family.

JScreen, based out of Emory University, offers affordable at-home testing for singles and couples who want to empower themselves with science-based knowledge before moving forward with having children. The national nonprofit offers comprehensive genetic testing on saliva.

Eastern Asian people, meanwhile, have a 1 in 72 chance of being carriers for Spinal Muscular Atrophy and a 1 in 112 chance of carrying the genes for ABCC8 hyperinsulinism.

“Various ethnicities have diseases that are more common within their group. For instance, with Ashkenazi Jews, it’s Tay-Sachs disease. For African-Americans and Latinos, it’s sickle cell disease. For Caucasians, it’s cystic fibrosis,” said JScreen’s Hillary Kener Regelman, who works at Emory University’s Department of Human Genetics. “Our panel includes more than 200 diseases, so there’s something for every background. That’s why this is so essential.”

Many singles and couples don’t think about genetics until they’re already pregnant, and by then, it is too late. That’s why the team behind JScreen hopes to make its tests easy and affordable so everyone can use them to make more informed decisions at the earliest stages of family planning.

Inspired by a Jewish Couple’s Visit with Geneticists

JScreen started in Atlanta, Georgia after a couple arrived at Emory University’s Department of Human Genetics with a sad tale. They said that when they decided to try to have children, they had gone to their regular doctor to get tested for their risk of passing on a genetic disease. They were aware that, as members of the Jewish community, they were at greater risk of passing on certain diseases.

Their doctor only tested them for a few common diseases. But the testing panel was not extensive enough. It turned out they both were carriers for a disease called ML4, and they only realized it when they passed it down to their child, who now — at age 12 — has the mental capacity of an infant and cannot walk or talk. 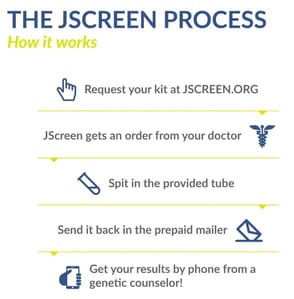 The JScreen process is straightforward and even screens for cancer risks.

“They told us, ‘This wasn’t supposed to be part of our fairy tale,’” Hillary said. “There are things they could have been tested for, and there were things that could have been done had they known they were a carrier couple of this disease.”

When couples get serious about creating a future and a family together, few people, if any, start a conversation about genetic testing. Often, the only time a doctor presents the option is when a woman is at her OBGYN’s office and is already pregnant. Education is central to JScreen’s mission. Hillary and the JScreen team want to raise awareness so more singles and couples can get tested as a precursor to family planning.

Now, in addition to the ReproGEN test that determines the risk for having a child with a genetic disease, the organization offers a separate test for hereditary cancer risk.

Affordability Makes Testing Available to Everyone

If both members of the couple are carriers of a specific genetic disease, there is a 25% chance in each pregnancy that they will pass it on to their children. Of course, that means there’s a 75% chance that the child will be born healthy.

However, the chance of passing down a disease can mean a lifetime of challenges for the child and the parents, whether they are single parents or a couple discussing different fertility options.

That’s why JScreen is available for anyone of child-bearing age — generally between 18 and 45 years old.

“It’s for all backgrounds, and it’s relevant for everyone,” Hillary said. “We do a pan-ethnic panel, so it’s incredibly comprehensive and includes many different diseases that you could be at risk to pass on. Some are more rare, and I’m glad people haven’t heard of them. We’re trying to help couples improve their chances of having a healthy baby.”

With insurance, the ReproGEN test is just $149, and it’s $299 if someone doesn’t have or use their insurance. Singles and couples can receive a discount if they purchase the ReproGEN test along with CancerGEN screening. Those tests could cost upwards of $1,000 at a doctor’s office.

If a couple cannot afford the test, JScreen offers financial assistance to those who qualify.

The goal is to make the tests available to anyone who wants one while educating people on why it’s important to be aware of their genetic risks. Hillary added that new reproductive technology makes it possible for people who know their risks to have babies free of the disease they carry.

Singles and couples can complete JScreen’s ReproGEN testing by registering online and requesting a kit. Each person fills out a separate request, as it includes questions about family history. Kit requests, which are done in coordination with a doctor, can be made online 24 hours a day.

JScreen sends you the at-home saliva test kit with a pre-paid envelope to return to the laboratory for analysis.

The process typically takes three to four weeks before people get an email about their results. That’s when JScreen allows singles and couples to schedule time with a licensed genetic counselor to discuss their results.

“That’s why so many OBGYNs rely on JScreen for their patients,” Hillary said. “They’ll refer patients to us because they know not only is their patient getting a comprehensive test but also that we’re also handling the genetic counseling. We’ll send them a copy of their patient’s results.”

Many regions throughout the United States don’t even have nearby access to a genetic counselor, so the telehealth appointment can be extremely valuable for couples who want to understand their genetic makeup.

“Every time someone registers for this, their life is changing, and we’re able to help them on their family planning journey,” Hillary said. “We’re often that first step; whether they get married or are just dating, kids don’t have to be on their mind for tomorrow. You can get screened at any point beforehand. It’s really special to see couples empowered by this information, because otherwise they really wouldn’t have known.”