The Scoop: Novelist Jack London found inspiration for his books at his homestead and ranch in Sonoma Valley, California, in the early 1900s. Today, individuals, couples, and families from California and beyond travel to the site, now called Jack London State Historic Park, to explore the writer’s cottage, orchard, lake, and life. The land, which was designated a California state park in 1960, includes 1,400 acres of wilderness and 29 miles of trails and is known for its proximity to California’s beautiful Redwood forests, and its sweeping views of the valley and Sonoma Mountain.

California native Jack London wrote some of America’s most famous novels on the outdoors, including “Call of the Wild” and “White Fang,” and it might satisfy fans to know that the man himself was as adventurous as his characters. He lived through the Klondike Gold Rush of the late 1800s and traveled the South Pacific.

At the turn of the 20th century, London took on an adventurous business venture — developing a working ranch in the foothills of Sonoma Valley, California. With his wife Charmian, he set out to implement organic and biodynamic ranching methods on a property he called Beauty Ranch.

From 1905 to 1913, London amassed more than 1,400 acres of surrounding land and constructed a cottage, winery, barns, silos, and other dwellings to help with the ranch’s operations.

However, when London died suddenly at age 40, work at the ranch slowed. As the years passed, the ranch seemed destined to be sold or developed.

Instead, the state of California recognized the site’s importance and stepped in to acquire and maintain London’s home, acreage, and ranch buildings. It opened the grounds to visitors in 1960 as Jack London State Historic Park.

Much like London, individuals, couples, and families who visit the park can find inspiration in the beauty of the Sonoma Wine region, as well as explore the Sonoma Mountain through the park’s 29 acres of hiking trails.

According to the Jack London State Historic Park team, people can also “enjoy stories of the adventures that Jack London and his wife Charmian Kittredge London enjoyed at the turn of the 20th century.”

Delve Into Jack London’s Life at His Cottage and Grounds

For more than 60 years, visitors to the Beauty Ranch have been fascinated by the Londons’ lifestyle, imagining them riding horseback to explore the property or setting out on a hike on nearby mountain trails.

A favorite stop on a tour of the ranch is London’s writing cottage, a 3,000-square-foot space where he worked in his later years. Visitors can explore the cottage, which aims to recreate the bohemian life that Jack and Charmian valued. London’s sleeping porch still holds his books and pencils, while the living area still houses the couple’s gramophone and masks from their travels. The couple even lived there while building their ill-fated dream house.

“The white cottage was where Jack and Charmian lived while building their dream Wolf House, which burned down shortly before they would move in,” said the team.

Other stops on the grounds include the Pig Palace, an opulent dwelling for London’s animals, his barns, and his smokehouse. 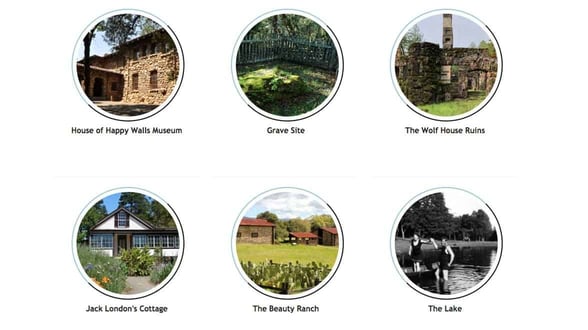 Couples can find inspiration on the grounds where Jack London once wrote and played.

Of particular interest to some may be London’s forward-thinking planting methods, which aimed to revitalize soil that he thought had been harmed by California’s pioneer farmers. In 1915, London wrote of his methods:

“I believe the soil is our one indestructible asset, and by green manures, nitrogen-gathering cover crops, animal manure, rotation of crops, proper tillage and draining, I am getting results which the Chinese have demonstrated for forty centuries.”

An exploration of London’s life wouldn’t be complete without a stop at the House of Happy Walls, a museum Charmian built after her husband’s death.

“The museum showcases so many of their adventures in newly redesigned exhibits. Something not to be missed,” said the park team.

Traverse 1,400 Acres of Wilderness With Your Partner

After gleaning inspiration from London’s adventurous life, you and your partner can explore on your own. The park grounds are in the foothills of Sonoma Mountain, and elevation varies from 600 to more than 2,000 feet. The park is home to many different landscapes, including redwood and oak forests and grassy meadows.

Nature-loving couples can hike the Ancient Redwood Trail, where they can find the Grandmother Tree, which has a 14-foot diameter and is between 1,800 and 2,000 years old.

The park team also suggests hiking to the top of Sonoma Mountain.

“You and your partner will feel inspired by the closeness you feel toward nature and those who came before,” they said.

A sample day for a visiting couple may start with a backcountry hike between two and 12 miles. Once you’re tired from hiking, you can then have lunch on the patio at the Jack London Saloon, which is close to the trail. If you’re planning a hike that you won’t finish by lunchtime, you can pick up a boxed lunch at the Ellen Village Market to take with you.

In the afternoon, make your way back to the ranch to take in some of the natural attractions. These include the lake that Jack created by building a stone dam on Sonoma Mountain, as well as the orchard he cultivated in the middle of Sonoma wine country. If you want to pay respects to London, you can visit his final resting place located between the museum and the Wolf House ruins.

Jack London’s adventurous life is reflected on the grounds of Jack London State Historic Park. The area continues to captivate people more than a century after it was his Beauty Ranch.

If you visit on the weekend, you can embark on a free docent-led tour of the grounds and buildings. These experts can provide little-known details about the unconventional turn-of-the-century couple. Jack London buffs may also opt for private tours, which you can book on the park website.

The legacy of Jack London lives on through his namesake state park.

Outside of exploring Jack’s life and the outdoors, the park also offers nearby opportunities to experience more of the region’s beauty.

In wine country, couples have plenty of opportunities to stroll through the same kinds of lush vineyards that Jack and Charmian would have appreciated. Wine tastings and tours are available to visitors of the nearby Benziger Family Vineyard, which focuses on making sustainable wines. Another local winery is Kenwood Vineyards, which uses grapes grown in the park to create a Jack London label of wines for tasting or for purchase.

In the summer, the park is home to Broadway Under the Stars in the old Winery Ruins. The Transcendence Theatre Company puts on musicals, like “A Chorus Line” and “Those Dancin’ Feet,” from mid-June to mid-September.

The park calls it “an absolutely ‘don’t want to miss’ evening under the stars.”

Though Jack London died more than 100 years ago, his legacy as an adventurer and an outdoorsman lives on. Visitors find themselves drawn to Jack London State Historic Park to get to know one of America’s most mythical personalities. While the park encourages visitors to learn about the author’s life, it also helps them do more of what he loved: spending time in nature.