The Scoop: HoudahGeo is a technical solution designed to help Mac users geocode and geotag their photos, so they’ll always remember where they were when they took each picture. The software adds the GPS data to the photo’s file, and its location will appear as a pin on HoudahGeo’s interactive map feature. Couples and families can use this user-friendly software to organize their photo albums by location and keep accurate records of their travels together.

My parents were married for eight blissfully childless years, and I’m told they had some pretty wild times going to parties, pulling pranks, and taking road trips with friends who were also childless and in their 20s.

One day, I was flipping through an old album, when I came across a faded picture of my dad wearing aviator glasses and an askew pilot’s cap with his arm slung around my mom who was in a hula skirt and pretending to play a ukulele. They’re both standing barefoot in a kitchen. The picture was unlabeled, so I asked if it was taken at a Halloween party in the ’80s.

After frowning at the photo, my parents said they had no idea. The background gave them no clues about where or when the party took place, and they don’t remember dressing like a pilot and luau girl. Sadly, that photo remains an unsolved mystery in our family.

As long as they have smartphones, today’s couples don’t have to worry about forgetting when and where they took their cutesy photos — the timestamp and GPS data are automatically recorded in the photo’s file. However, Mac users only have a timestamp embedded in their photos, which means that location data could become lost in the shuffle.

HoudahGeo aims to solve this issue by allowing Mac users to record and save latitude, longitude, and altitude information directly in the image data files.

HoudahGeo adds location information to the data file of photos on Mac devices.

HoudahGeo helps Mac users remember where their pictures were taken. Thanks to this geocoding and geotagging software, your location information will stay attached to your photos permanently.

You don’t have to be very tech savvy to get the hang of how HoudahGeo works. If you take a photo with a GPS-enabled camera, it will automatically record the location information as part of the file. If your photo does not have location information, you can go to HoudahGeo to assign coordinates and location names to the image.

Couples who travel frequently can use HoudahGeo to make sense of their growing photo albums and keep track of where they’ve been and when.

A Useful Tool for Travelers Telling a Story in Their Albums

Developer Pierre Bernard from Luxembourg created HoudahGeo to help amateur and professional photographers tell a story and save their memories with every snapshot.

“Geotagging is one of the areas where digital photos have an edge,” he told us. “I want to bring that to all cameras and not just the smartphones.” 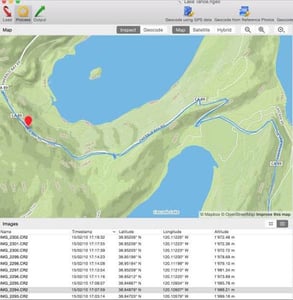 Couples can’t be expected to remember where they were for every photo ever taken of them, especially nowadays when smartphones make it so easy to take and store thousands of photos in their albums. In 2017, tech experts estimated that the total number of digital photos stored would grow from 3.9 trillion to 4.7 trillion.

As personal photo albums become mind-bogglingly large, they also become more difficult to manage and organize. Say you want to create a collage of all your romantic weekend getaways. Do you flip chronologically through the years to find these photos? What if you can’t remember the dates these trips were taken? Maintaining an album would be much easier if you could sort through photos by location.

That’s where HoudahGeo comes in. HoudahGeo geocodes and geotags photos for Apple users who want to keep accurate albums. HoudahGeo has a built-in map to help users find, assign, and double-check locations on their photos. 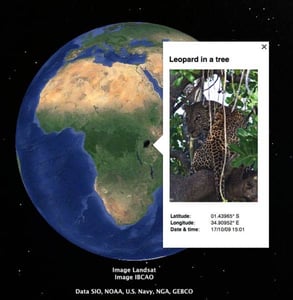 HoudahGeo connects to Google Earth and allows users to pinpoint their locations by placing a pin on the map.

This tool comes in handy for frequent travelers who want to organize and show off their photos without putting in a lot of effort. HoudahGeo can automatically embed GPS data to a photo file, export photos for viewing in Google Earth, or upload to Flickr.

Just like that, you can have a concrete reminder of where you were during every photo. The GPS data can become part of the story you tell about the picture. It can tell you the elevation you were at on your plane selfie, or it can show you where your boat was when you saw a pod of dolphins in the water.

“The purpose of HoudahGeo is to bring photos together with their locations which can be a big complex thing,” Pierre explained. “We geotag photos so the information is added to the image file itself, and that makes it easier to organize and share it.”

HoudahGeo’s tagging system means that Mac users can use location information to find photos from different years. Maybe couples have a favorite anniversary spot and want to collect the photos from their trips. They can browse the map, and all the photos taken at that location will appear.

“It fills a gap that Mac users have,” Pierre said, “since smartphones record location information automatically.”

Pierre originally created HoudahGeo as a solution for himself. He wanted to embed location information on the photos on his Mac, and he couldn’t find a tool that did that. So he built it. Now, he provides that software to other users with similar frustrations.

HoudahGeo is a family-run company that includes Pierre, his wife, and his father. Pierre handles the coding and customer support service, while his father does the bookkeeping, and his wife writes the blog and handles German translation.

When customers reach out to the HoudahGeo team, it’s often to troubleshoot or raise an issue, but every so often someone writes just to say thanks for making a great tool or the software receives a positive review, and that makes all the hard work worthwhile. Pierre said he’s proud to make something that can be helpful to so many different types of people.

“We try to provide the best possible solution for everyone,” Pierre said. “From customer feedback, I can discover what the intended use was, and I can help improve the product to cover more use cases.”

“HoudahGeo is my geotagging tool of choice on the Mac. Great stuff.” — Cary Talbot on Digital Photography Review

Pierre himself uses HoudahGeo to organize his photos, so he’s a big believer in the usefulness of this geotagging tool. He told us he has heard of road workers using HoudahGeo to record exactly where damaged roads are located. He said nature photographers and environmental workers also find it useful to get coordinates for specific photos of an animal or plant they want to keep track of and find again.

HoudaGeo can offer a helpful memory jog for couples who enjoy telling stories about the good old days. They can see the altitude of 8,000 feet and remember how snowy and cold it was on the mountain. They can view the location on a map and find the quaint café around the corner where they shared a croissant. It adds an extra layer of detail to the photograph, so the story becomes more than a single frozen image.

“You benefit from having more context in your albums,” Pierre said. “Location information enhances the photos from a storytelling perspective. You can show where you were and how you got there. Those are stories that pictures alone can’t tell.”

Pierre used an African safari trip as a prime example of when automatic geotagging could improve a photo album. When you’re in the back of a Jeep, you may not know where you are or where you’re going, but you can track your journey by taking photos and recording the location data on them. Maybe you’ll find out that you were driving in a circle, or you’ll see that you saw zebras in the same spot where you saw lions the next day.

HoudahGeo: Save & Locate Your Family Photos

My parents weren’t exactly thinking about the future when they were in their 20s, so it’s not that surprising that they didn’t keep great records of every party or costume contest. Still, it’s too bad geotagging wasn’t a thing in the 1980s because I really want to know what was up with that mysterious pilot’s outfit.

Nowadays, high-tech solutions can help modern couples save location information on a digital photo so that knowledge never fades or disappears. HoudahGeo enables Mac users to attach a latitude, longitude, and altitude to their photos, so they can look it up on a map and go, “Oh, yeah, that’s where we were.”

HoudahGeo can geocode thousands of photos, thus empowering individuals, couples, and families to keep their albums organized for posterity. Pierre said he hopes this technology can save couples, like my parents, the hassle of having to remember their exact location in every photo.

“It’s about preserving and finding memories,” he told us. “To me, it’s important to know that my location information lives within the file and is safe for the future.”