The Scoop: Louis J. Koch decided that his town of Santa Claus, Indiana, needed a fun way for people to meet the town’s namesake, but he went much further than dressing up in a Santa suit. He created an entire theme park for Saint Nick in 1946. Today, Holiday World celebrates more than Christmas. It also celebrates the Fourth of July and Thanksgiving — among other holidays — and includes a water park called Splashin’ Safari. Adventurous couples and families who visit the one-of-a-kind theme park can get their fill of roller coasters, water slides, and tasty food.

It isn’t always easy for couples to find something new for a date night. Dinner and a movie are a popular standby, but many couples search for something more unique.

Fun-loving couples in the Midwest can find that one-of-a-kind experience at Holiday World & Splashin’ Safari in Santa Claus, Indiana, which has many of the bases covered. A fun-filled date? Check. A completely different kind of theme park? Got it. Award-winning roller coasters? Definitely.

Indiana industrialist Louis J. Koch founded the park in 1946 after realizing that visitors had nowhere to see Santa Claus in the town that bore his name. So Louis opened Santa Claus Land, a theme park with rides, games, and, of course, Santa Claus.

“My great-grandfather started the park as a retirement project. He thought the town of Santa Claus needed a place where everyone could meet Santa,” said Leah Koch, Louis’ great-granddaughter and the park’s Director of Communications.

The park became a must-see attraction for singles, couples, and families over four decades as Santa Claus Land. In 1984, the Koch family decided to add two new sections — for Halloween and the Fourth of July — so visitors could celebrate more holidays throughout the year. The park’s name was changed to Holiday World to accompany those new additions. A few years later, a Thanksgiving area was added to the park.

Still, despite its growth, the park remains committed to Louis’ vision of bringing holiday magic to small-town Indiana, and it accomplishes that by maintaining family ownership through the generations.

“My sister, brother, and I are the fourth-generation owners, and help operate the park,” Leah said.

And thrill-seeking couples shouldn’t miss out on The Thunderbird, perhaps the most unique roller coaster experience in the U.S.

“The Thunderbird is a launch-winged coaster, which means that you have nothing above or below you on the side of the track. It has a launch to start things off. It’s the nation’s only winged coaster and the top winged coaster in the world,” Leah said. 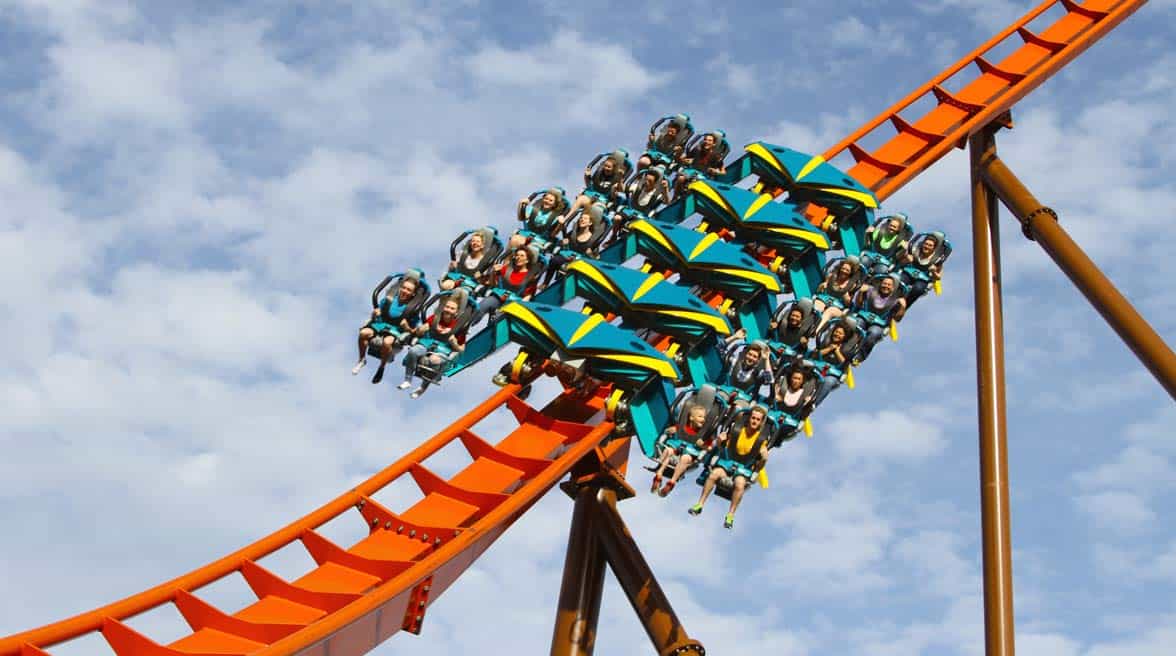 The Thunderbird is the only launch-winged coaster in the U.S. and provides quite an adrenaline rush.

As a lover of roller coasters herself, Leah said that she often tests the bravery of her dates by taking them on coasters.

“Riding roller coasters gets your adrenaline pumping. And I can really judge the guys I see by their choice of roller coaster,” she said with a laugh.

Leah recalled a story she heard about a couple who shared her affinity for the rides.

“The guy was a complete coaster nerd and had a job designing coasters. I met the woman at a party, and she told me they went on their first date at Holiday World. And he made her pay for her ticket, so she didn’t even know if it was a date,” Leah said.

But that adventurous first date proved to be a great idea. Now, the couple is married with a child who they plan to raise to love roller coasters.

Splash With Your Partner at America’s Top-Rated Water Park

After riding the coasters, couples can head over to Splashin’ Safari to cool off during the hot Indiana summers. Though the water park has some calmer attractions, Leah recommends the park’s two water coasters: the Mammoth and the Wildebeest.

The Mammoth is the longest water coaster in the world — certified by the Guinness Book of World Records. It is seven stories high, with a path that covers more than three acres. The Wildebeest isn’t quite as long as the Mammoth, but it is known for its four-story drop, underground tunnels, hills, and helix.

Couples and families looking for calmer options can try the Bahari Wave Pool or the Bahari River to relax.

“The water park is consistently voted the top water park in the country by USA Today,” Leah said.

People can cool off at Splashin’ Safari during hot Indiana summers.

After so many wild rides, guests tend to get pretty hungry. And the park’s culinary offerings don’t disappoint.

Couples can head over to the Thanksgiving section of the park for a full holiday meal at the Plymouth Rock Café. There, they can sample fried chicken, chicken and dumplings, or roasted turkey with all the trimmings — a holiday staple.

If you want something a little more adventurous, Leah shared a park snack that she loves: loaded cheese fries.

Though many people visit the park during the summer, Holiday World is a magical place to visit in the fall, too, when temperatures dropped a bit.

In September, after the water park closes down for the season, Holiday World hosts Happy Halloween Weekends. The park is decorated with pumpkins and other seasonal designs, and the staff dresses up in costumes. Food offerings are also fall-themed, including pumpkin-spice funnel cakes and grilled cheese and tomato soup.

“We stay very on-theme as long as we can,” said Leah.

This commitment to those themes, thrill rides, and unique food offerings are why the park has remained a top attraction in the U.S. for more than 60 years. Today, the park welcomes nearly 1 million visitors each year.

Other thoughtful details make the park even more accommodating to visitors. For example, you can have your fill of unlimited soft drinks throughout the park during your visit. Also, in case you left your sunscreen at home, the park has free sunscreen stations throughout the park. Perhaps most unusual, though, is Holiday World & Splashin’ Safari’s free parking.

“We don’t want to nickel-and-dime you because we appreciate that you walked through the gate in the first place,” Leah said.

Because of this friendly, family-run environment, many people keep coming back, year after year.

“We become a part of families and a part of their histories. We want you to have a great time and be a part of our family when you come here,” Leah said.

You might even become part of the family — literally — like Leah’s mom did when she worked for the park.

“My parents were what we call a HoliCouple. My mom was a singer and a dancer in a musical review. My dad — who hadn’t taken over the park yet — was a tech for those shows. They met at the park, and the rest is history,” Leah said.