Galaxy Cantina & Grill: A Date Spot Where Couples Can Connect Over Mexican Fare and Margaritas

The Scoop: Couples looking for fresh, upscale Mexican cuisine in San Diego often choose a date night at the Galaxy Cantina & Grill. Guests may drop in for lunch or dinner after spending the day at La Jolla Shores Beach, which is right next door. The restaurant specializes in Mexican food staples, including tacos and margaritas, and adds seafood-heavy dishes couples won’t find at other spots. Couples frequent Galaxy Cantina & Grill for its unique Mexican food, high-end service, and vibrant atmosphere.

Many couples plan trips to La Jolla Shores Beach, in La Jolla, California, to relax and unwind. They can play in the sand, soak up the rays, and take in views of the beautiful Pacific Ocean. If they want to explore the water, they may rent surfboards or kayaks from local businesses.

After a day of beach activities, couples are often hungry, and they don’t want to travel far for some fresh, upscale food — and maybe a nice view of the ocean. That’s when they spot a restaurant with plenty of outdoor tables, an inviting Mexican vibe, and other guests dressed in beach attire. That restaurant is Galaxy Cantina & Grill.

“We have as much outdoor seating as indoor seating. And since COVID-19 changes, we’ve even put up three or four tables on the sidewalk,” said Trey Foshee, Galaxy Cantina & Grill Owner and Co-Chef.

Once couples sit down, they can order a couple of handmade margaritas filled with fresh ingredients — no mixes.

“Our margarita has been voted one of the best in town. Our juice is squeezed daily, and we hand-shake each one to order. We don’t use mixes. It’s all fresh product,” Trey said. 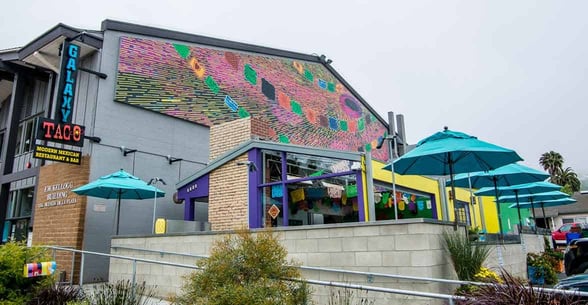 Diners are also hungry after a day in the sand and sea, and some order a large helping of one of Galaxy Cantina & Grill’s specialties: Baja Fried Fish. The taco dish is served with chile-lime crema, avocado mousse, and pico de gallo.

Many couples decide to share a few of the restaurant’s delicious appetizers, including the queso fundido with shishito peppers and tortillas or a grilled blue corn shrimp quesadilla with crema and jack cheese.

For dessert, they can try the churros with vanilla ice cream topped with Mexican chocolate to cap off a memorable beach date. Whether they are capping off a beach day or grabbing a quick bite on date night, couples find plenty of reasons to keep coming back to Galaxy Cantina & Grill.

Six years ago, Trey wanted to open a Mexican restaurant focused on the cuisine he loved to cook.

“I’ve always had a love for Mexican culture and food after the trips I took there to surf. When I got into the culinary world, I started understanding what was happening down there. I always had an appreciation for it,” he said.

He and his Head Chef, Christine Rivera, decided to create a restaurant concept based on what San Diego locals enjoyed. So, Trey and Christine designed a seafood-heavy Mexican menu inspired by fresh foods from California.

“When we were thinking about what we wanted, we decided to focus on a San Diego experience. It needed to tie into the community, so fish tacos started the conversation,” Trey told us. 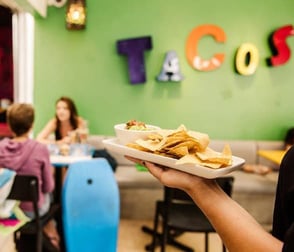 Couples often enjoy the restaurant’s tasty food and margaritas after spending a fun day at the beach.

Galaxy Cantina & Grill is also one of the only restaurants in the city that serves a combination of delicious Mexican food and tasty margaritas. Though couples could find great Mexican food and great margaritas in San Diego, they couldn’t find both at the same restaurant on date night.

“There wasn’t anywhere in the San Diego area where you could get both a good margarita and a good Mexican meal; you could get one or the other but not both,” Trey said.

The Galaxy Cantina & Grill also serves heirloom corn tortillas, ground from scratch and prepared daily. The corn is shipped from Oaxaca before the team cooks it, grinds it, presses it, and grills it. The restaurant is still the only place in the city preparing tortillas that way, and the extra step makes a difference in the taste.

Supporting the Community During the COVID-19 Pandemic

The Galaxy Cantina & Grill concept is unique in the San Diego area. High-end, chef-driven Mexican restaurants typically serve expensive entrees, and food trucks offer quick bites to go. Couples don’t have to dress up to eat at Galaxy Cantina & Grill, and they don’t order at the counter like they would at a taquería. The restaurant is casual with an attentive staff, but guests don’t have to change out of their beach clothes to dine there.

“We have a following with the local community and tourists,” said Trey.

Still, business hasn’t been typical for Galaxy Cantina & Grill since the COVID-19 pandemic shut down parts of the state nine months ago. Those shutdowns required most restaurants to shift to offering takeout or close down altogether. 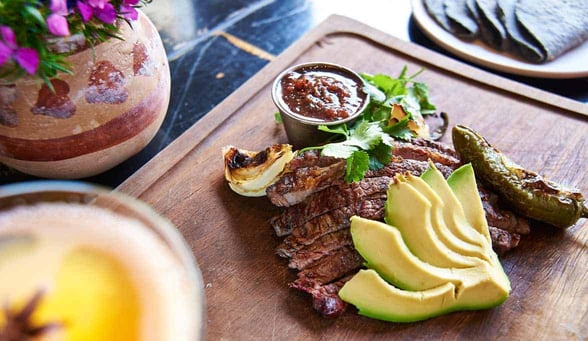 Trey recognizes the need for precautions and has been trying his best to deal with the restrictions. While the restaurant is closed, Trey encourages couples to purchase gift cards to use for a date night when Galaxy Cantina & Grill reopens. Guests who purchase a $50 gift card also receive a gift card bonus.

Trey and the team plan to come back even stronger after a COVID-19 vaccine allows the business to resume service as usual.

“We’ve seen a lot of Mexican restaurants come and go, and we’re still here. Christine has been the chef since opening day, and the whole team is good people who believe in the product we’re making. We’re glad to still be here, making people happy,” he said.

Galaxy Cantina & Grill has established itself as a beachside staple for daters in San Diego. The restaurant’s connection with other local eateries helped it earn a pedigree for success.

California cuisine is all about using seasonal, local ingredients to create the best tasting dishes. The company’s other restaurants have adopted that culinary standard, and Galaxy Cantina & Grill followed in their footsteps.

“We thought about what a Mexican restaurateur would open in this location. We didn’t want to cook any Mexican staples that wouldn’t sell here. We focus on what makes sense from a Mexican food perspective in the area we’re in,” Trey told us.

The restaurant’s tacos have become popular, but so have less typical Mexican offerings. For example, its Octopus Tostada is grilled on a wood-burning grill, and the spicy orange-habanero salsa pulls together the octopus, bean, and avocado flavors. The Wood-Grilled Trout, with adobo rub and watercress aioli, has gained a devoted following as well. Its Braised and Roasted Pork Shoulder served with cabbage, beans, chicharrón, radish, and cilantro, demonstrates how elevated Mexican food can be.

With such a strong connection to renowned spots, Trey and his team want to see Galaxy Cantina & Grill thrive as long as its sister restaurants have. The restaurant focuses on the San Diego community, an innovative menu, and an inviting atmosphere to ensure diners will keep coming back.

“I consider Galaxy a casual place to pop in for a taco and a beer. Or for dinner and a date night. It answers all calls,” said Trey.