The Scoop: Dressember is an organization that’s on a mission to stop human trafficking for good. For the month of December, people can raise awareness and money for this global issue by wearing a dress or a tie every day. Participants can set up a fundraising page on Dressember.org and are encouraged to have meaningful conversations about human trafficking with their family, friends, and coworkers. With the money it has raised, Dressember funds programs that focus on a range of issues, including prevention and counseling for survivors.

In 2009, Blythe Hill started a personal style challenge in which she wore a different dress every day in December and posted pictures on social media. The challenge, which she called Dressember, became an instant hit with her friends and continued to blossom as they spread the word.

As Dressember’s popularity grew, Blythe began thinking about how she could use that publicity for the greater good.

“I’d been passionate about the issue of human trafficking, so I set a big goal for challenge participants to raise $25,000 to stop human trafficking. We ended up raising that in three days, and, by the end of December, we’d raised $165,000,” Blythe told us.

Dressember has struck a chord with participants, and new participants join the challenge each year and pledge to wear a dress — or a tie — for the 31 days of December. Participants share their personal fundraising goals on their Dressember pages and other social media platforms, which also serve to start important conversations about human trafficking.

Dressember began as a fashion challenge but grew into a movement aimed at ending human trafficking.

“Even if they don’t raise a ton of money, people having those conversations and spreading awareness makes a huge impact. While the fundraising is important, it’s not always the most important part,” Blythe said.

Spreading awareness of this ever-increasing problem is vital because human trafficking is a global issue that is on the rise. Annual profits from human trafficking are around $150 billion, and estimates suggest that 20 to 40 million people around the world live in modern slavery.

People across the world seeking to raise awareness of the global exploitation of human beings often take part in Dressember together and help motivate each other to make it through the entire month. After all, it may be challenging to find enough ways to wear dresses or ties for 31 days — and the conversations around human trafficking can also be difficult.

“By mid-month, it’s not only helpful to have that commitment there but also the camaraderie,” Blythe said.

Fashion for a Cause: Wear Dresses or Ties the Whole Month

If couples want to participate in Dressember, the first step is to set up a fundraising page and indicate how much money they want to raise during the month. Fundraising goals range from less than $1,000 to more than $100,000.

From there, participants can share their fundraising pages via social media, email, and even personal conversations.

“It’s great to commit to it and then tell many people that you’re doing it,” said Blythe.

When supporters visit fundraising pages, they’ll see what their contributions can accomplish. For example, $105 can cover the trial fees faced by a victim if they want to testify against their abuser in court. For every $900, a survivor can access vocational training, and $6,719 could cover the complete rescue efforts of one trafficking victim.

Most people don’t donate thousands of dollars, but even the smallest contributions add up. As participants near their fundraising goals, their barometer inches higher.

The organization also hosts events in cities across the country to spread the word about Dressember. Its kick-off event is held in the organization’s home city of Los Angeles in late November.

Supporters in other cities often have their own kick-off parties to start building a groundswell of participants and donors before December starts. For example, a local boutique may offer to sell dresses for women to wear in Dressember and donate a portion of their proceeds to the organization.

“We love it when people take opportunities to jump-start the campaign. We ask people to gather supporters in the area and get excited about it and start building the momentum early,” said Blythe.

Supporting Programs for Survivors and Initiatives Around the World

To further the impact of the challenge, Blythe created the Dressember Marketplace, which offers ethical dresses made by women in Nepal. Many of the artisans who make the clothing were once trafficked across the border to India. Dressember Marketplace also has merchandise and campaign materials, and all the products are ethically made.

Dressember decided to launch its own line of dresses to provide jobs to more vulnerable women.

“The women in the sewing center were rescued from brothels or in border intervention. Hearing their stories was life-changing, and seeing them have jobs where they earn a living wage was powerful,” said Blythe. 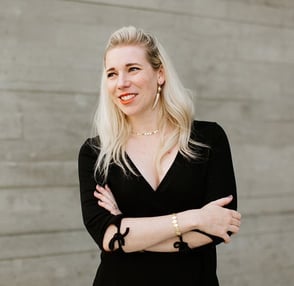 The foundation’s impact goes well beyond this single dress shop. Dressember also partners with other global organizations to fund prevention, rescue, and holistic after-care for men, women, and children who are survivors of trafficking around the world.

But Dressember’s other partners, including Truckers Against Trafficking, are perhaps less visible — but just as important — members of the fight.

“Transportation workers, like Uber drivers and truck drivers, often come in contact with trafficking victims but don’t know what to look for,” Blythe said.

The funds Dressember raises helps all of these organizations maximize their impact. The foundation has raised $7.5 million since 2013. In 2018 alone, more than 11,000 people were impacted by Dressember’s partner programs.

Dressember Works Toward Its Goals All Year Long

Blythe has always been interested in fashion, but until she started Dressember, she didn’t know the full impact of her purchasing decisions. In fact, she didn’t think that her individual choices could make much of a difference on a larger scale.

“Now, I’ve seen the power of the individual. When we unify as a collective, it’s like an army of freedom fighters,” she said.

That’s also why it’s vital to purchase ethically made clothing.

“We partner with apparel brands because there’s such an overlap of labor trafficking in the clothing industry. We partner with fair trade clothing because we want to encourage people to pay more attention to their clothing choices,” Blythe told us.

Spreading the message of practicing more ethical shopping is one of the many impacts of Dressember. 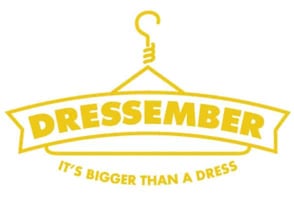 Dressember participants wear a dress or a tie every day during December.

“Everything we do, say, or buy has a ripple effect. We have an impact on people around the world that we don’t even realize,” Blythe said.

Entering its sixth Dressember season, Blythe is humbled by the survivors of human trafficking she regularly encounters. She shared the story of a young woman who’d been sold into trafficking by her mother. Blythe expected the woman to be sad and broken, but she was surprised by her spirit.

“She had this air of hope, and she had dreams and goals,” Blythe said.

Dressember and its partner organizations help women and girls like her succeed, and after-care options mean that her story doesn’t end with her abuse or exploitation. Instead, she gets to write her narrative herself.

“There are so many other people like her, and we can help them. We can end human trafficking. It just takes resources, time, and public interest,” Blythe told us.