The Scoop: DogSpot Founder Chelsea Brownridge was dismayed by the number of places in Brooklyn, New York, where she couldn’t bring her dog, Winston. She, like many other dog owners, wanted to take Winston with her on errands but didn’t feel comfortable leaving him tied up outside. Based on those experiences, she created DogSpot, a company that provides electronically-locked dog houses in front of participating businesses. If individuals, couples, and families want to take their pet to the grocery store, for example, they can safely secure him or her in one of these dog houses placed in front of the establishment. Over the next year, DogSpot plans to open more than 250 locations throughout the country.

Like many dog owners, Chelsea Brownridge is in love with her furbaby, Winston. She enjoys taking him everywhere she goes in Brooklyn, New York, which, in turn, helps him get more exercise after being cooped up inside all day while she’s at work.

However, at many grocery stores, restaurants, and coffee shops, she’s been greeted with “No Pets Allowed” signs on the doors. So, several times she’s had to leave Winston at home while she picked up dinner or ran out for a coffee.

“When I got home from work, I would pick up dinner or laundry or a package or whatever,” she told us. “If I was going anywhere that didn’t allow dogs, it meant Winston couldn’t come on the walk.” 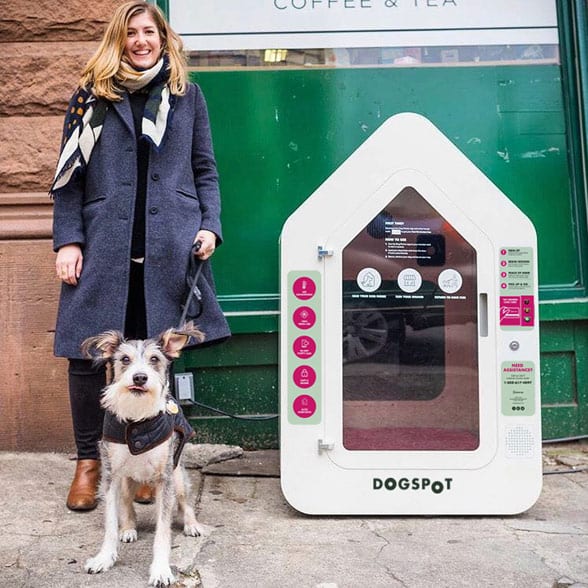 Chelsea Brownridge started DogSpot so her dog, Winston, could have a safe place to stay while she ran errands.

Some people have mentioned to Chelsea that she should just leave Winston tied up outside the establishment she needed to visit. However, she didn’t feel comfortable with this solution, either. So, Winston had to often miss out on additional walks around town just because she’d be going into a “no dogs allowed” place for a few minutes.

Chelsea knew she wasn’t alone. Many of her friends faced similar problems when trying to spend time with their dogs.

“Now, there are more dogs than children in our cities, so people are running into problems with taking their dogs around with them,” she said.

From this frustration, Chelsea came up with the idea for DogSpot, a company that places app-controlled dog houses in front of businesses that don’t allow pets inside.

“We’re happy we can be a solution to an everyday problem,” she said. “The whole team is dog owners, so we thought about what we wanted to build for ourselves.”

Before expanding DogSpot, Chelsea and the team tested 50 dog houses, deciding what features made both owners and their pets feel comfortable. DogSpots aren’t just wood-and-nail dog houses. They have both air conditioning and heat and use UV light to kill bacteria that’s been left behind by other canines. Further, the houses are equipped with cameras, so you can check in on your pooch whenever you like.

The first part of the process is a dog owner becomes a member of DogSpot. With a membership, they can unlock spots set up throughout a city by swiping a membership card onto an empty dog house. Only the same card can open the house, so no one — not even another DogSpot member — can open the house with your dog in it.

Users can also track convenient spots by using the app — which pinpoints nearby DogSpot locations and lets you know if a nearby house is already occupied. 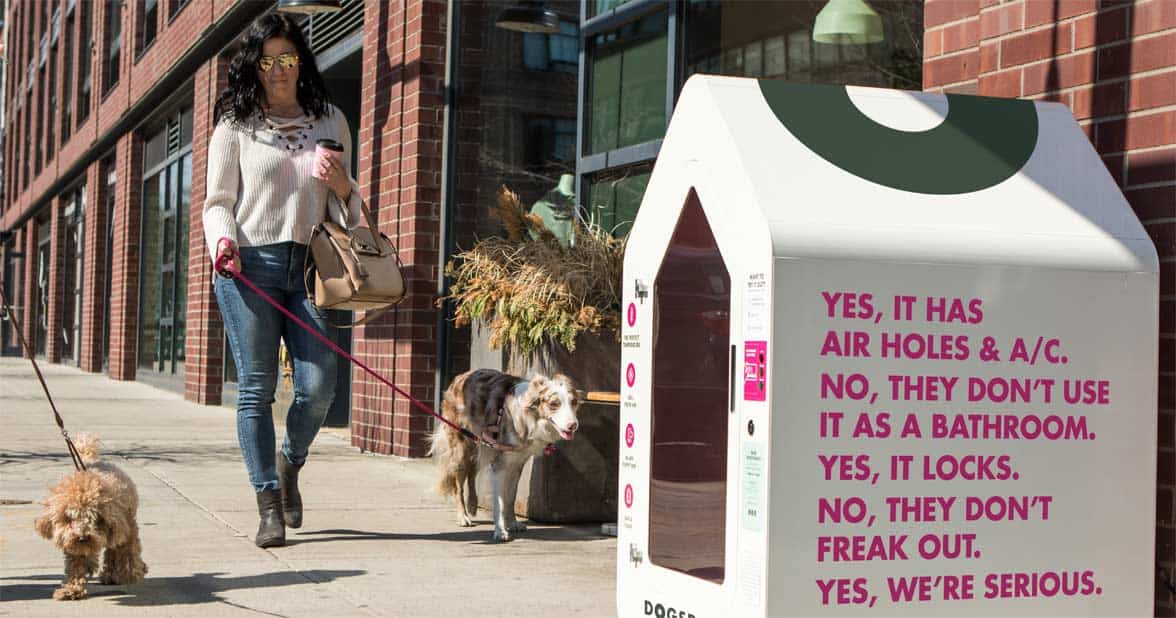 What’s more, when an owner puts a dog or a pair of dogs into a DogSpot, that’s it. No other dogs can be put inside, meaning that you don’t have to worry about your pooch interacting with other dogs.

“If two dogs are of the same family, they can go in there together, but if the house is already full, you can’t open the dog house,” Chelsea said.

Chelsea added that dogs seem to really like these enclosed spaces where they can be separate from the hustle and bustle of the city.

“Dogs know what’s good for them,” she told us. “That den-like environment for them is natural and cozy, so they’ll just jump right in.”

DogSpot originated in Chelsea’s home city of New York, and the concept swiftly caught on throughout the country. There are now DogSpots in Connecticut, Missouri, and Nevada, and more houses are going to be introduced in other states in the upcoming months.

“We have 60 locations nationwide, and we’ll be expanding to another 250 locations by the end of the year,” she said.

DogSpot partners with local businesses that want to attract a dog-owning clientele. Chelsea told us the houses are a benefit to dog owners because they can leave their pets in front of a business. At the same time, business owners can attract dog-owning clients who would prefer to have a place to house their pets while stopping in for an errand.

“Our number one request is grocery stores, followed by fast casual places like ice cream shops and coffee shops,” she said.

DogSpot adds new locations based on where dog owners want to shop. The particular locations people request the most are the most likely to recieve a DogSpot. As of now, Chelsea has received thousands of requests from companies that want these houses installed in front of their establishments.

“We partner with locations directly,” she said.

In 2019, DogSpot will continue expanding to some of the most dog-friendly locations in the country. Many locations will open in the Seattle area in June 2019, along with launches in D.C., Philly, Portland, and Baltimore in July 2019.

Chelsea said she attributes the growing success of DogSpot around the country to the simplicity of the idea.

“The technology and operations used to develop the DogSpots are complicated, but it’s an easy concept to understand,” she told us. “Most dog owners have run into this problem.”

DogSpot Wants You & Your Pet to Spend More Time Together

Dog ownership is one of the equalizing factors in modern life. People of all ages, demographics, and income levels own dogs, with 3 in 4 millennials owning an animal.

Chelsea said she expected DogSpot’s primary users would be millennials who are familiar with using apps for all sorts of connected technology. While millennials are using the technology, they’re not the only ones. One of the company’s first super-user was a woman in her 70s who lived in Park Slope, Brooklyn. Since she lived in a walk-up apartment, she limited her trips up and down the stairs but still wanted to bring her dog with her on errands.

“She could get more done efficiently during her day,” Chelsea said. “She would target any store with a DogSpot in front of it and start shopping there more often.” 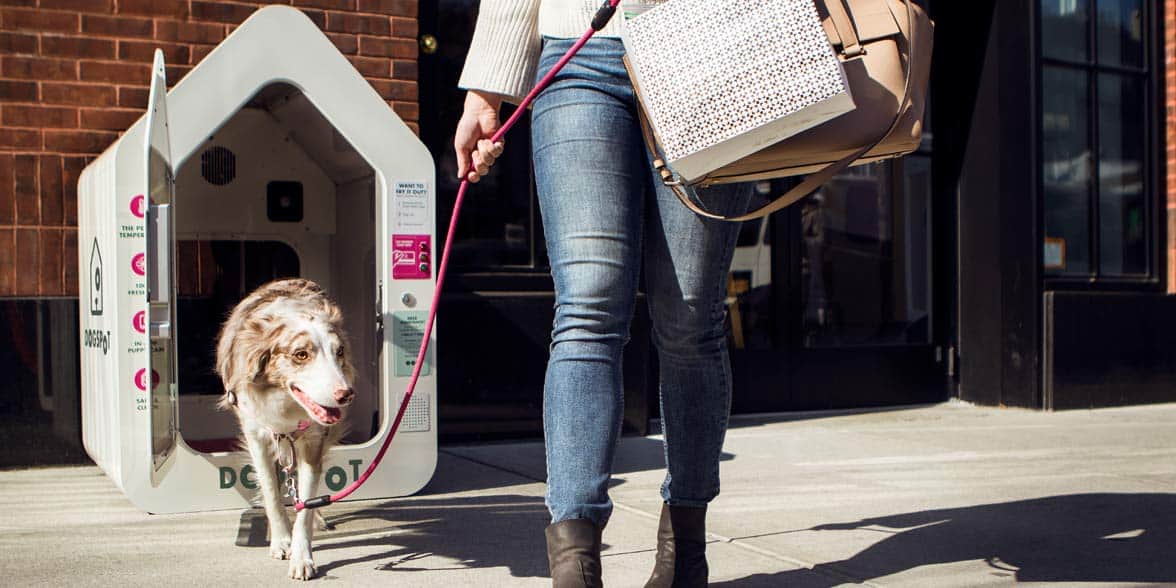 DogSpot can help many individuals, couples, and families with dogs maximize their time together without sacrificing the efficiency of running errands.

“Eighty percent of dog owners will just skip their errand if they can’t bring their dog in,” Chelsea said.

DogSpot’s concept is simple, but it’s really struck a chord with people. Already, DogSpot users have asked for at-home versions, so they can keep their dogs safely housed and monitored. Others have asked for DogSpots for trains and airplanes to create a safer way for pets to travel.

For now, though, DogSpot is focusing on the original concept: delivering a clean, safe space for dogs in a city. So far, the company has done just that extremely well.