A 2005 study of 833 undergraduate students concluded that straight men and straight women experience pleasure differently in the bedroom — in that men often experience it, and women often do not.

About 91% of the cis-men in the study said they usually or always orgasm during sex, while only 39% of cis-women reported the same.

Sex is hardly a one-sided affair, yet it seems many heterosexual couples prioritize the man’s sexual climax over the woman’s. As the researchers said, “Orgasm for women is pleasing, but ultimately incidental.”

In 2014, two women set out to do something to change that. Alexandra Fine and Janet Lieberman co-founded Dame Products, a sex toy company, to revolutionize the way couples view sex and people with vulvas experience pleasure. 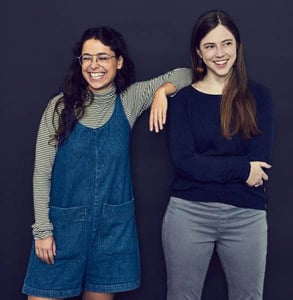 Its products put the vulva first and “make the world a happier place, one vagina at a time.”

Janet and Alexandra came from vastly different fields to unite behind this cause. Janet graduated from MIT with a bachelor’s degree in mechanical engineering, while Alexandra has a master’s degree in clinical psychology with a concentration in sex therapy from Columbia University.

“It only took one breakfast meeting to know we had the complementary skill sets to start something special,” Alexandra said. “Dame Products was born!”

Now Janet and Alexandra design unique vibrators that meet the sexual needs of vulva owners and foster greater intimacy and equality between straight and lesbian couples looking for a way to shake things up in the bedroom.

Alexandra and Janet have put in a lot of work to ensure anyone with a vulva can enjoy Dame Products. They have testers as young as 18 and as old as 68 trying out the products and providing feedback during the design process. Their goal is to offer a range of versatile sex toys that work for everyone from virgins to post-menopausal women.

“Most people with vulvas need clitoral stimulation to achieve orgasm,” Alexandra said, “so we wanted to make that as easy as possible during partnered sex.” 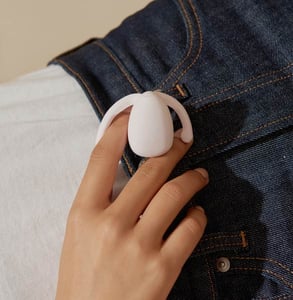 In November 2016, Fin was the first sex toy allowed to have a campaign on Kickstarter, and it successfully raised over $394,000 from nearly 5,000 backers.

Finally, Dame Products has Pillo — a wedge-shaped foam pillow — to help vulva owners enjoy a variety of sexual positions without straining their hips or back. The soft yet firm pillow can help couples get the right angle and prioritize comfort during climax. In the words of the product page, “More libido, less lumbago.”

Alexandra told us she’s been interested in gender and sexuality for as long as she can remember. As a child, she had a natural curiosity for this adult topic, and her family encouraged her to ask questions and form her own opinions. Alexandra’s aunt even took her to a drag show once. 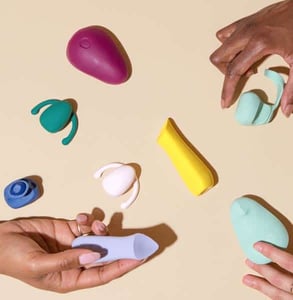 “We’ve created a company culture of authenticity, vulnerability, and trust,” Alexandra said. “All of these are critical in our business — where we talk about sex every single day at work.”

Dame Labs is powered by results-driven women and men who believe in the company’s mission. Together, they’re helping singles, couples, and polyamorous groups build intimacy.

Extensive research goes into the development of every Dame Labs product, and the design team listens to customer feedback to improve its functionality.

Alexandra told us it’s not just about building sex toys — it’s about building a community of sexually awakened and empowered individuals. Dame Products reaches out to people with vulvas and encourages them to express their desires and pursue their fantasies without inhibition.

“Dame is building a community to humanize a product space that isn’t always speaking to the audience it serves,” Alexandra said. “We’re aiming to contribute to a world with increased sexual understanding, so our customers can value and honor their well-being — sexually and beyond — because it’s all connected!”

On a Campaign to #DerailSexism & Promote Pleasure 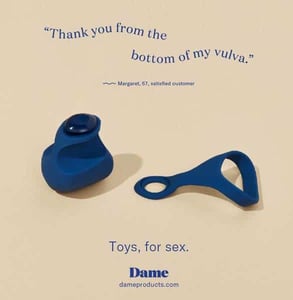 Dame Products has developed a strong line of sex toys, and now its marketing team has to get the word out. However, the company has met with some resistance on that front.

The Metropolitan Transportation Authority in New York City refused to put up Dame Products ads, citing a rule that prohibits sexually oriented businesses from advertising on the subway. However, Dame Products noted that hasn’t stopped the subway from airing ads about erectile dysfunction and condoms.

The Dame team wouldn’t accept what they saw as a blatantly sexist policy, so the company filed a lawsuit against the MTA in June 2019.

“The MTA’s Victorian view of female sexuality and the First Amendment cannot stand,” reads the complaint. “The MTA’s censorship of Dame’s advertisements cannot stand. All New Yorkers — and all women — deserve better.”

Whether it’s producing playful sex toys or filing a lawsuit to #DerailSexism, Dame Products is determined to look out for the interests of women everywhere, and this team won’t be satisfied until they close the pleasure gap for good.

Dame Products: Something New for People With Vulvas

Dame Products has produced sex toys engineered for intimacy and designed for maximum pleasure. The company’s playful, discreet, and user-friendly vibrators can enhance partnered sex, and it can also help vulva owners take care of themselves and take control of their own orgasms.

“Every time we receive a customer story, it reminds me why we started Dame in the first place,” Alexandra said. “I think we’re helping people discover new parts of themselves in the bedroom, and that they’re having better sex with our products. It’s amazing to get to be a part of that joy.”