The Scoop: Since 2013, Crisis Text Line has revolutionized crisis intervention counseling by offering a quick, free, and anonymous text-based hotline in the U.S. The team of empathetic counselors have exchanged over 87 million messages with people facing various crisis situations, including domestic abuse and sexual assault. You don’t have to confess your darkest secrets in the first message to Crisis Text Line — just text “Hello” to 741741 and get the conversation started.

The inspiration for Crisis Text Line began in 2013 with a text message from a young person. “He won’t stop raping me. It’s my dad.”

An anonymous person sent that message to activists at a civic leadership youth program called DoSomething.org. The youth advocates were stunned by this cry for help. They had run donation drives, advocacy campaigns, and educational programs to support and empower teenagers and had never anticipated their text-based campaigns would lead to such a serious conversation.

That conversation inspired the DoSomething team to live up to the name and do something. In August 2013, DoSomething’s team launched Crisis Text Line in the U.S. to be there for anyone. Crisis Text Line was the first hotline of its kind. It’s 100% free and 100% text-based.

“We recognized the need for an SMS-based hotline so people can text their concerns to crisis counselors,” said Nancy Lublin, the Founder and CEO of Crisis Text Line.

Crisis Text Line is now active in all 295 area codes in the U.S. Anyone can text 741741 to get in touch with highly trained crisis counselors and mental health experts. It typically takes less than five minutes for a volunteer or staff member to respond to an initial message. The Crisis Text Line is always open, and it’s free to text for as long as you need to.

Since its launch, Crisis Text Line has exchanged over 87 million messages, and perfected its tech-savvy counseling techniques to better serve singles, couples, and families in crisis.

Crisis Text Line is a volunteer-run organization with a dedicated and passionate team backing its mission. Anyone can become a volunteer and start making a difference in people’s lives. Every day, over 700 volunteers sit down at a computer and field incoming text messages from people throughout the country.

All volunteer counselors go through a background check and undergo a 30-hour online training program that covers how to build a rapport over text, de-escalate a crisis, and explore mental health or personal safety issues in a nonjudgmental way. Their goal is to get texters in a calm state of mind in the moment and put them on a path to seek professional help if necessary.

Volunteers learn to respond to people in crisis with empathy and collaborative problem-solving. These knowledgeable individuals conduct suicide risk assessments and talk people through all sorts of crises. They’ve fielded texts from people in abusive relationships, teenagers battling depression, rape survivors struggling to cope, and others who feel as if they have nowhere to turn and don’t know what to do.

No matter what the issue is, the volunteer counselors can offer an empathetic ear and calm words of wisdom. All you have to do is text “Hello” to get the ball rolling.

Nancy told us the Crisis Text Line conversations tend to get very personal very fast. Texting allows individuals to skip the small talk and cut to the chase with a text saying “I have bulimia” or “My boyfriend hits me.” It’s often easier for people to confess their secrets through the faceless, voiceless medium of a text message.

“People feel they have more control when talking via text,” Nancy said. “They can pause and think about their responses. It’s amazingly personal and yet not intrusive.”

Nancy built Crisis Text Line on a data foundation. The nonprofit has collected a tremendous amount of data and uses it to make the crisis counseling process faster and more effective. Crisis Text Line analyzes when texts come in, how long conversations last, and other data points to improve its system over time.

Incoming texts tend to spike during times of turmoil. For instance, messages spiked around election time in 2016. Nancy said Crisis Text Line also sees an uptick in messages during 8 p.m. through 2 a.m.

The Crisis Text Line post-conversation survey has been particularly instrumental in helping the counselors understand their impact and identify texting’s strengths and weaknesses. The survey is optional, but many texters choose to participate to help the counselors evaluate how the conversation went.

“Every day, we summarize the survey data and share it with our staff, so we’re constantly improving through data,” Nancy said. 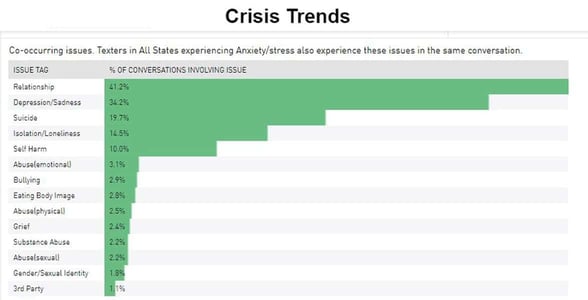 Over 41% of Crisis Text Line conversations involve relationship issues of some kind.

One of the most important questions Crisis Text Line asks is “Did you find the conversation helpful?” Answers to this question are consistently positive. Around 85% of respondents said the conversation helped them in some way, and the team is committed to keeping that number as close to 100% as possible.

The average Crisis Text Line conversation can last anywhere from 15 to 45 minutes. The counselors take the time to get to know the texter and build trust with that person through steadfast empathy and positivity.

According to Crisis Text Line’s data, 65% of texters tell the counselors something they’ve never told anyone before. “They’re willing to get so personal because texting is so accessible to them,” Nancy said. “It creates a sense of privacy, intimacy, and anonymity.”

Through Active Listening, Counselors Save Lives

Sometimes a person in an abusive relationship can’t call 911, but they can send a quiet text. They can contact Crisis Text Line and receive advice in the moment or access to the proper authorities without having to say a word and give themselves away to an abuser who may be in the same room.

The accessibility of texting a crisis counselor helped individuals in difficult situations. People have texted from bathrooms, bedrooms, offices, buses, and lunch cafeterias. They can have those private conversations while in public spaces and seek help on their own time and in their own way. 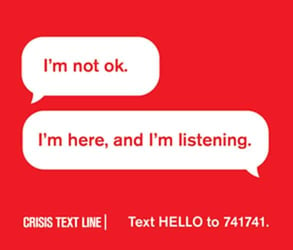 Crisis Text Line conversations give people a confidential sounding board.

“We’re here for anybody who needs to talk,” Nancy said. “We work to deal with an immediate crisis situation and take people from a hot moment to a cool moment. It’s beyond rewarding to know we’re saving people’s lives.”

Some texters have followed up weeks or months later to say that they’re doing better — maybe they’ve left an abusive relationship or they’ve sought professional therapy — and those stories encourage the Crisis Text Line team to keep going.

In addition to supporting individuals in crisis, Crisis Text Line also offers knowledge and guidance for loved ones struggling to help someone deal with abusive situations or mental health issues. The counselors have created many informational resources on crisis intervention, including how to identify suicidal behavior.

Crisis Text Line encourages people to Always Ask if they’re worried about someone they know. Ask your loved ones how they’re feeling. Ask if they’re having suicidal thoughts. Ask them to confide in you. It never hurts to ask.

“This is something anyone can do for anyone else,” Nancy said. “You can take the loneliness people feel and show them they’re not alone. Don’t just wonder — ask what’s going on.”

A single text message can change someone’s life. An anonymous person texted DoSomething to seek help in an abusive situation. When Nancy saw that text, she sprang into action and built a technological system that could act as a safety net for rape survivors, assault victims, and other individuals in crisis.

Looking to the future, Crisis Text Line plans to expand onto the global stage through international partnerships. Nancy said she wants to share the nonprofit’s data and technology infrastructure with crisis intervention organizations in Canada, the U.K., and other English-speaking nations. She plans to reach out to volunteer-driven hotlines and help them upgrade their systems to reach more people around the world.

“It’s very meaningful work,” Nancy said. “There are no words to describe it. We’re not just helping the individual texter de-escalate a crisis. Saving one person’s life has a ripple effect that impacts so many people’s lives.”