The Scoop: Intimate Partner Violence (IPV) is an issue that affects people of all genders, races, classes, and sexual orientations in America. On the West Coast, the California Partnership to End Domestic Violence (the Partnership) is on a mission to prevent and end IPV. The coalition works with nonprofits, government agencies, and legislators while also researching and advocating for policies that reduce domestic violence. Through those relationships, the Partnership has helped pass legislation that decreases domestic violence while increasing the resources available to survivors.

Unfortunately, domestic violence is a common occurrence in America. According to the National Domestic Violence Hotline, 29% of women and 10% of men have reported rape or violence committed by an intimate partner, and more than 12 million people suffer intimate partner violence (IPV) every year.

Since 1981, October has been National Domestic Violence Awareness Month in the U.S. The goal is to spread awareness about the issue as well as educate people that violence is more than just physical. It can be emotional threats, stalking, isolation, and other abusive behaviors.

The Partnership’s ultimate goal is to end domestic violence in California.

Despite those remarkable strides, domestic violence remains an issue for people across the United States. On the West Coast, the California Partnership to End Domestic Violence (the Partnership) supports healing and social change during National Domestic Violence Awareness Month. The coalition reprents over 1,000 survivors, advocates, organizations, and allied individuals across the state, working with a broad range of social justice partners to challenge the conditions causing domestic violence and support survivors on a broad scale. This involves capacity building, communications, and public policy efforts.

“Since domestic violence impacts every area of survivors’ lives, our polices must be equally as responsive. I also want to reinforce that domestic violence is not inevitable. It can be prevented, and we’re dedicated to doing that at every level of our society,” said Jessica Merrill, the Partnership’s Communications Manager. “The coalition is in the process of defining what its policy priorities will be ahead of the 2020 legislative session.”

Once it identifies issues and solutions, the Partnership mobilizes its coalition and allied organizations to enact change through government.

Since the Partnership began nearly 40 years ago, it has helped pass nearly 200 pieces of legislation at both the state and federal levels, and the group will continue to work toward its ultimate goal: to end domestic violence in California.

For Domestic Violence Awareness Month, the Partnership created its “Survey for Survivors: Growing the Seeds of Healing and Justice” campaign. The survey included a wide range of questions in many different languages with funding for translations provided by NextGen Policy. Survivors who responded were asked to consider what changes they would want to see in order to access healing and justice — from accountability to the person who caused them harm to the systems designed to support them.

“Every survivor’s response was so unique. It was powerful to see each one submitting their input about their own needs for healing — because survivors are the experts in their own lives, and also have much to offer in the work toward social change,” Jessica said.

A question included in the survey asked: “What would you need from your friends, family, and community to feel safer and cared for?”

One survivor wrote, “I would need my family and friends to be supportive, not judgmental. I would want the community to design and come up with support systems among agencies that can provide victims of domestic violence easy access to community support.” 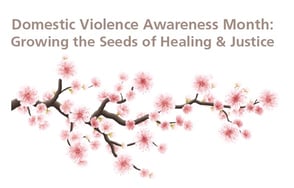 The Partnership created “Survey for Survivors,” asking them to describe their experiences and needs.

In another response, a survivor said: “Teach and actively model what healthy relationships and consent look like. Engage others in the practice.”

“We felt the survey was important in a way that centered survivors’ self-determination and listened to what they needed to access healing for themselves,” Jessica said.

Survivors identified eight root solutions that they believed would lessen their trauma, as well as domestic violence as a whole. One of the most important was that their abuser was held accountable for his or her actions.

“Many survivors identified the importance of an apology, paying for the costs of that harm, and doing the work to change their behavior,” Jessica told us.

“Any time survivors can speak their own truth is healing. Even if it’s through a survey where they can remain anonymous, the important thing is we’re passing the microphone to the survivors,” said Jacquie Marroquin, the Partnership’s Director of Programs.

One of the Partnership’s primary missions is to identify the root causes of domestic violence, and much of the organization’s work focuses on how social change can diminish violence at home.

Recently, the organization has had the goal of increasing access to paid leave, which would allow more workers to take time off to care for a loved one when they experience sickness or injury. Low-wage and immigrant workers are particularly unlikely to have access to paid leave.

But how does paid leave tie into domestic violence?

“It increases equity in our society. By decreasing financial stress, it makes our relationships healthier,” Jacquie said. 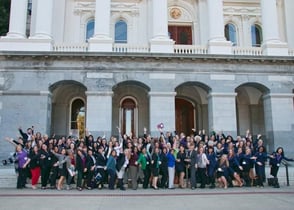 Economic justice initiatives can influence domestic violence rates as well as provide survivors with more options if they choose to leave abusive relationships.

The Partnership strives to maintain frequent communication with legislative offices about laws it supports, as well as initiatives like Domestic Violence Awareness Months. Recently, the organization shared the results of its “Survey for Survivors” with legislators.

“We hope that they explore these responses and understand what survivors need to heal and find justice,” said Jacquie.

In addition to prevention, the Partnership focuses its attention on supporting the organizations that work directly with survivors in California.

“So many survivors need support, and the demand is high in every single community,” Jacquie said. “They’re looking for the healing and safety that’s best for themselves and their families.”

The Partnership Promotes Policies That Diminish Violence Against Californians

While strides have been made to combat IPV in the U.S., the work is far from finished. That’s why the Partnership offers many ways to get involved with domestic violence prevention organizations — no matter where you live.

“Any Californian can get involved in the movement to end domestic violence,” Jessica said. On its website, the Partnership displays a map of all its member organizations, where visitors can find ways to connect with local efforts.

Further, people can get involved by donating to the Partnership. Actress and activist Evan Rachel Wood recently discussed the coalition’s work to prevent domestic violence, and encouraged people to make a donation.

For those who don’t live in California, Jacquie advises people to connect with a local IPV prevention organization, where they can assist hotlines after they become trained as volunteers. The National Domestic Violence Hotline has helped more than 3 million survivors of domestic abuse.

“There is likely to be a domestic violence organization in every community,” she said.

National Domestic Violence Awareness Month has helped move an issue that once was a hidden part of society into the forefront. Since it started, domestic violence organizations have made significant strides to understand and prevent domestic violence.

But until domestic violence no longer exists, the Partnership will continue being a vital organization. Addressing the many layers of oppression, expanding gender inclusivity, and creating more economic equity are some of the values at the foundation of their work.

“We address needs for healing and safety, but we also want to keep considering how society needs to change so domestic violence doesn’t exist, and survivors are better supported,” Jacquie said.